Two amusing stories and a short

I have now settled back into guiding having recently completed a whole run of tours: general Oxford ones plus some on Tolkien and Lewis and others on ghosts. There are ups and downs during all tours of course but I do value the challenge and the interaction with the general public a lot. Children can be difficult, especially if they are, as often, on a tour dominated by adults. But they can also be amusing. Recently I had some really well-behaved youngsters on a tour, including a seven-year-old lad. I took them into the Queen’s College and at the end of my usual quite lengthy talk on religion at Oxford University plus the entry of women I asked if there were any questions. The seven-year-old’s hand shot up and everyone turned to him expectantly. And his question was, “When is this going to end?” It was very funny and I rewarded him and the other kids with a visit to Harry Potter hot spots following that. Amazing that that young magician’s spell seems to just go on and on. 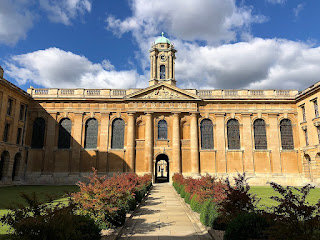 I’m currently attempting to completely renovate a bathroom including covering the shower walls with plastic panels ordered via the web. They arrived quite quickly but the trims for the corners were white whereas I had ordered black. I sent an email to the suppliers and a few days later a long cardboard box arrived containing ... yet more white trims. So I emailed as follows

Have now received the replacement trims and when I opened the package they too are white!!!! I ordered black to match the panels I must have BLACK trims. Please replace as soon as possible.

I received a reply quite rapidly as follows:

Mr Walters my head is in my hands, I can't apologise enough.

The warehouse manager is flogging the culprit as we speak.

The correct colour trims will be dispatched today.

A long cardboard box did arrive the very next day and I opened it with some trepidation fearing yet another example of the dominance of white over black. Yet when I opened it there, at last, were the black trims. So I replied:

Thanks for your very amusing response. I thought black humour was effectively stifled in this woke world, but two deliveries of white trims have brought it back. And I now have the black trims and two sets of white trims so you can take your head from your hands and the flogging of the culprit can cease forthwith.

The reply was rapid and terminated a fun interchange between two strangers who will never meet:

The culprit will be delighted that you have pardoned him. Mind you we think he was starting to enjoy it. 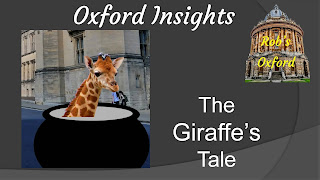 On my return from Spain I suffered a sudden plunge in visitors to my Rob’s Oxford YouTube channel just before views of the channel reached the 20,000 mark. There seems to be no explanation for this apart from the vicissitudes of the YouTube algorithm, so I am reacting by preparing a series of short videos, something suggested by a video expert who viewed some of my currently active releases. The series is called Oxford Insights and the first video is titled The Giraffe’s Tale. It’s quite funny. Have a look.