I like change, most of the time, and in Oxford I live in a changing environment. I start each of my many tours of the city by stating where I live then asking my group where they are from. A few years ago I told them that I resided in paradise in Oxford and I did: 18 Paradise Square! Nowadays I tell them that I live in the part of this city where the rich and famous reside: most visitors find this amusing, not all. To make the latter even happier I describe a property they might like to buy, my current example is a house around the corner in Crick Road which has an asking price of over £5m! Ridiculous. You could buy the entire block of flats in which I live for that. 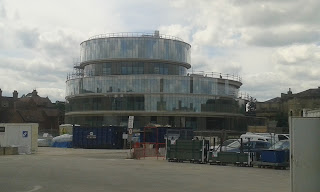 Actually most of the changes that occur here are in the colleges and university buildings surrounding us rather than the residencies. St Hugh’s has recently completed its Chinese centre; St Anthony’s  thankfully blocked the view of its ugly concrete dining hall a year or so ago with a quite passable residential building; St Anne’s is currently digging a deep hole on which it will build, if the artist impression is anything to go by, a bulky building which will fit in quite well with its existing buildings, but will hardly grace the Woodstock Road. Added to this, the university recently completed its new mathematics and humanities building nicely incorporating the old 19th century hospital building. Furthermore, it has nearly finished the new governance centre on the same campus: I love that new building with its diminishing glass circles. 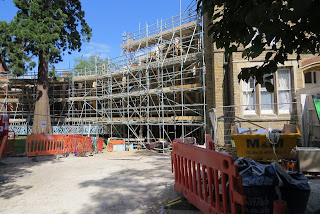 Architects , I believe, divide into two camps: one of which tries very hard to design buildings that fit their surroundings and adjacent buildings; the other endeavours to make a statement. Nearly opposite me, in the grounds of St Anthony’s College, is an example of the latter. It is sometimes called the Softbridge and sometimes the Investcorp Building, by either name it is something of a shocker: it reminds me of the sinking of the Titanic for some reason. Built predominantly of stainless steel it links two innocent and attractive brick building from the 19th century. As the new building grew so too did my horror. An awful thing was evolving on my doorstep. I thought of writing to the Oxford Times about this monstrosity signing the letter ‘Bemused of Butler Close’ but felt that I could not since I no longer buy the paper. 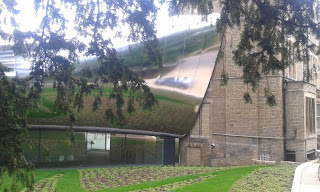 After two years of work the Softbridge is now complete, the gardens are nicely planted and manicured, the trees hide quite a lot of the tapering, shiny tube and…and I must confess that I quite like it! The stainless steel reflects the trees, the lawn and the plants in a rather interesting way. The sun glints on the odd truncated portholes which lie along the backbone of the monster, and it now looks milder, softer.

Am I going soft? Not really. I am still appalled at the University of Oxford for spoiling, and the council for allowing them to spoil, the views across our cherished Port Meadow. The latest compromise for this travesty of planning is that the guilty buildings should be demolished at the end of their thirty-year lifespan. Thirty years! I and many of the protestors will not be there to see the destruction – or protest.

Still, perhaps it’s all about perception. More on that later.
Posted by Rob Walters at 00:42 No comments: