Having whipped through Vietnam with Margaret, I am now in Cambodia, alone. Though sharing a border and a long history, the two countries are quite distinct: if nothing else in language – written and spoken. I couldn’t say which I prefer, though I have fond memories of the exciting local bar life (with music) in Hue, Vietnam and the lovely position of Hoi An where we celebrated the Lunar New Year. Tet, as they call it, played havoc with my usual last minute travel plans from there. At one time we were stranded in the place we liked least, Nha Trang, but rescue came through a Chinese mother and daughter who shared a taxi with us to the hill town of Dalat.

For a tourist Cambodia is Angkor Wat and vice versa, but that is not entirely true. On arrival in the capital Phnom Penh, I found myself in a horrible cheap hotel in an equally nasty area and could not wait to leave, but I found a better hotel near the Mekong river (a river that dominate my travels) and, hey, everything was fine. Fine that is, except that I became a little depressed when visiting the ghastly detention centre used by that unforgiveable communist organisation, the Kmer Rouge, to torture and kill thousands of innocent people.

I moved upriver to Kratie in search of dolphins, these freshwater creatures inhabit a stretch of fast flowing water about 15 Km above the town and are a delight to watch from an open boat. Have a look at the name Kratie and you will find something not so nice in the middle, and that’s what I found there. On my first night, after shrugging off an old woman who attempted to give me a massage right there in the bar I saw four of the devils running along the gutters, ignored by the arrogant street dogs who accept them as do the locals. I know rats are everywhere of course, but these were big ones and not at all shy.

On my last night in rat town (otherwise a very pleasant place) I decided to eat in a corner restaurant near my hotel, partly because I admired the heavy wooden furnishings of the place and also because it seemed popular with the local. As I stood at a table studying the menu, something ran over my sandaled foot – you’ve guessed what I’m sure. To the amusement of the waitresses I threw the menu down and commenced a hasty retreat, my hunger had suddenly vanished. The rat preceded me, it was an ugly fellow with patches of hairless, grey skin and seemed determined to block my path. Ugh.

I left Kratie the next day for an interminably long journey in a packed minibus bound for Seam Reap, the capital of Cambodia’s tourist industry. The so called VIP bus seemed to stop everywhere and more and more people and luggage and boxes were piled in until the narrow corridor form my back seat to the exit door was completely blocked. But the journey had to be done, the temples of Angkor Wat and many others are the main reason for visiting this country, and Cambodia, ravaged by war and communist idealism needs the US dollars ( their main currency, by the way).

My hotel, owned by a Brit called Scotty as it turned out, was fine for the price I was paying and I soon had an agenda for the following day – a tuk-tuk driver would pick me up and drive me to many of the nearest temples, including the most famous, Anghkor Wat, at 7am. First we had to visit the ticket office where I shelled out £37 for a one day ticket to the temple area – a fortune in this country where a glass of beer cost as little as 50p. But the money, hopefully, helps with the restoration and ongoing maintenance of this vast inheritance from the ancient Cambodian empires. 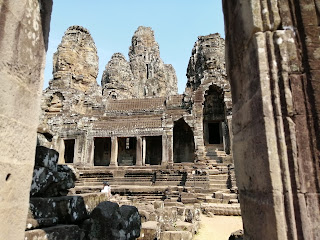 I am not going to describe the temples, there are plenty of accounts around that can convey the splendour of these unique creations set in the midst of the Cambodian jungle better than I can. My own reaction was wonder at the size, extent, amount and detailed stone work and bas-reliefs. Some of the carvings are in great shape having been there for some thousand years, and there are so many finely carved walls representing battles, daily life and processions. The buildings are not so well preserved as photos may suggest and some, like Ta Keo, have been almost ruined by the incursion of the vast trees of the jungle. 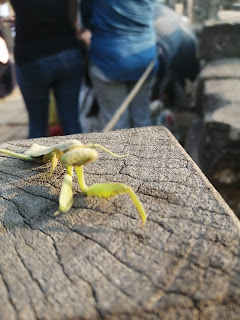 By lunch time, to the confusion of my driver, I had had enough. In the heat, the crush of people in some temples, the interminable ascents and descents of dodgy stone steps, the incessant drone of multilingual tour guides and pressure of touts selling everything from books to fridge magnets, I became over-templed. Lunch helped to set me going again and I did finish my tour at a mountain top temple where the masses gathered to watch the sunset. Disliking masses I decided to forgo the sunset itself and make my descent when there was a cry from a man in the crowd, “You have an insect on you!” I looked down to my legs but could see nothing. “On your sock,” he shouted. And there I saw this very large green thing. I was horrified and tried to brush it off, but it would not let go. Then someone came up to me saying, “It’s a praying mantis”. Now I really like those things, but am not so keen on having one attached to me. The man crouched town and gripped the thing behind its head and fortunately it released me. He then placed it on a post where he and I photographed it. This caused great amusement in the many people nearby. Perhaps they will remember that incident over the glory of the sunset.