I do like to travel, even though I did rather too much business related buzzing around in my middle years and do not now relish long plane flights. I suppose I feel the greatest freedom when wild camping in my motor caravan, especially when the travelling is unconstrained and the next destination decided at the current one.

Our latest trip was a little constrained. I wanted to visit Ilkley, Yorkshire on one particular day for a scratch performance of The Armed Man and we had to visit Margaret’s relatives at the tip of Scotland for a few days. The rest was a blank sheet - great.

We had time to explore a little of Yorkshire Dales and the Northumberland National Park on the way up, but I think my high point was a boat trip to the Farne Islands to view the mass of birds jockeying for space on the rocks and observe the fat seals lazing contentedly on their own rugged island.

In Scotland we spent a night in Kinross, parking the van within sight of Loch Leven. Sounds idyllic, but there is a reason for that long stretch of water – it rained must of the time we were there. In the bleak weather Kinross seemed a bit of a dump and none of the pubs seem to sell my favourite tipple – real ale. Yet things can turn. In one of the town’s pubs we were told that a brewery had a bar with ‘that handpumped stuff’ further down the road. We found it and it was great. There they told us that there was a good place to eat further down the road, and it was, and also that there was great little pub a mile or so further on and there was. The Village Inn was perfect: friendly people, animated chat, excellent ale, traditional décor and more. We found nothing like it further north.

On our return we had a tyre blow-out on a narrow busy road near Fort William. Nonetheless  we had a good night in the Rod and Reel public house further south where the two ladies behind the bar served us with a Scotish scowl and politeness verging on the acidic, but the beer was excellent and so was the raucous company of two couples from Australia who were also making their way towards the Cotswolds.

Interestingly, our own town of Stow on the Wold has a counterpart in the north of England. It is called Appleby and the thing the two places have in common is the great gypsy horse fairs. So, almost magically, Appleby appeared on the blank sheet as a our last overnight stop. It was also our wedding anniversary.

Whereas Stow begrudges the influx of gypsies with their horses, caravans, trucks, gypsy queens and followers, I had heard that Appleby welcomes them. I knew that most shops and pubs in Stow close their doors whilst the fairs are in progress, yet a one-time resident of Appleby had told me that villagers set up roadside food stalls and throw open the doors of its many pubs. Why, I had even been told that horses were taken into the pubs there!

Stow and Appleby are very different places: one on a hill, the other with a river running through it. One is constructed of warm yellow Cotswold stone, the other of brick and render. And, while Appleby is overlooked by a castle, Stow looks down on one and all. And yet they are inextricably linked by the travelling people.

The horse fair had just finished when we arrived, signs were still up indicating the many parking areas allocated to the gypsies and much of the rubbish that they always leave remained to be collected. It was no surprise to find 'No Overnight Parking’ signs at all of the spots that we might have overnighted, but a friendly local told me that motor caravans often used the swimming pool car park so we ignored the sign and made camp.

Appleby is a nice village with plenty of pubs and, though the first we tried was closed, we did find a quiet hotel next door willing to serve us dinner (just us) and then we crossed the road to the Hare and Hounds for a complete and utter contrast. As I opened the door music almost blasted us back into the street, but the tall blonde landlady beckoned us in and we were soon settled next to the jukebox with a pint and a spritzer and a view of the raised part of the pub where a large group of left over gypsies sang, danced and laughed uproariousl fueled by a constant supply of drinks bought by one of their number – the treasurer presumably. 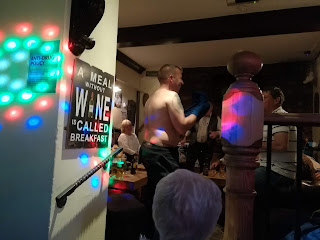 What a night, if I can think of two numbers which spilled loudly out of that constantly fed jukebox which characterized the music then these must be Tom Jones’ Delilah followed closely by Cher’s Gypsies, Tramps and Thieves. The dancing was flamboyant, suggestive, irresistible: some of it was led by the landlady joined by the short muscular man in the blue Tshirt (which he removed at one point to dance topless, the landlady did not object yet did not follow). We were drawn willingly into the party, dancing and holding hands with the gypsies whilst ‘Hands’ belted out of the machine.

Yes, what a night. We are now truly twinned with Appleby in Westmorland and have become proper gypsies.