Living in Spain does give you a different perspective. The Ukraine situation dominates TV and radio news here, as elsewhere, yet in this country the main concern seems to be the ridiculous plebiscite held in the Crimea: a vote where maintaining the status quo was not even an option. And why should that be of such interest? Because in this crazy vote the Catalan separatists see an opportunity to push their obsession: an independent Catalonia. This sideshow serves to deflect attention from the real issues in the world at large where Putin’s Russia seems to be challenging the west to step up or shut up. Meanwhile, in the background Spain possesses a number of semi-autonomous ‘states’, the Basque Country amongst them, waiting on the side lines and watching the Catalonia/Crimea story with great interest. The Spanish Prime Minister has even felt it necessary to point out that Spain is not Russia, which we all knew because Russians wear funny hats (don’t they?)

I am no expert on Spanish politics, but did observe the delight with which my (sort of) son-in-law greeted the news of the Scottish independence vote. Previously he had maintained that the Catalans, of which he is one, did not require independence; they merely wanted to be like Scotland - whatever that meant to him. Now that the Scots are going to get a vote on independence, the Catalans want that too. Whichever way the Scottish vote goes, and it is, of course, a legal vote with two contrasting choices, the Catalans and other separatists in Spain’s loosely coupled democracy will use it to bellow their ‘nationalistic’ fires.

Catalonia is on the east side of northern Spain, bordering the Med (e.g. the Costa Brava), and its capital is Barcelona. Here the natives do not wear funny hats: sombreros are solely for sale to English tourists. An independence vote is planned there for November and this is an illegal one in the sense that, in contrast to the UK and Scotland, the democratically elected central government have not agreed to it and therefore would not recognise a ‘yes’ result. Nor, I’m told, would the EU, including, no doubt, the UK.

By the way, as a bit of background, besides the usual chauvinism fuelling the Catalan separatists cause (food, music, language, history, poetry, etc) there is a rather selfish economic argument too. Catalonia, with a large slice of industry located there, is one of the richest ‘states’ in Spain: separatists want the largess this provides for themselves, rather than subsidising the predominantly agrarian economy of, say, Galicia.

I expect it’s pretty obvious that I am generally against separatism. I do not think that nationalist zeal is good for global peace, nor that is good for the separated and it is certainly unlikely to achieve their dreams (except those of the separatist rulers), furthermore, where does it all end – should the rich South-East of England separate from the poorer parts?

I have a particular and personal interest in the Catalonian situation. In Spain, we live in Aragón, just on the edge where it joins Catalonia. And within that frontier area, we live in Matarraña which is mostly Catalan speaking. It is just possible that we could, in some variant of the future, become part of a “Free Catalonia”, where the local children would have to be taught in Catalan and all official correspondence would be in that language. So, having spent fifteen years or so trying (not too successfully) to learn Spain I would have to start again with Catalan. Phew!
Posted by Rob Walters at 18:55 1 comment:

Here we go again: Dover to Calais then a thousand mile journey to our village in Spain. We landed at four in the afternoon and motored rapidly south to Elbeuf which, from its name, sounded an OK place, but was, if fact, a bit of a dump. We parked in the Carrefour supermarket forecourt and set out for a cultural evening. This mostly consisted of searching for bars and restaurants that that were actually open: Elbeuf, which is just south of Rouen is a largish place, but quiet, very quiet.

Of course, we all know that French people are rude and arrogant and that they hate the English. Yet, in our experience, nothing could be further from the truth. After a trail through nondescript streets, mostly not lived in by French people, we found a bar and lo, it was open and lo, the beer was passable and lo, the barmaid did not speak a word of English, but was so friendly and so helpful we began to think that we could speak French. After a number of attempts she identified a restaurant that was open, was not too expensive, and had good food. She gave good directions, but we quickly became completely lost. Then, who should turn up beside us in her car but the smiling barmaid - now off duty. And, guess what, she drove us to the restaurant! She then took us inside and was greeted by the owner with such enthusiasm that we knew the whole thing was a scam. That last bit was invented for sceptics; she simply dropped us outside and continued with her journey home.

The restaurant was open (even on a Monday evening in France), there were a few people eating inside, and it was pleasantly French in decor. The waiter, Julian, spoke excellent English. He told us that he had spent some time in England and reckoned it the best time of his life. He insisted that we try the blue cheese on banana on toast as a starter because this was the only place that served it “in the whole world”. It was rather special, and so was the rest of the meal. Julian then gave us excellent directions to our supermarket car park home where we spent a much disturbed night (too much traffic noise – don’t these supermarkets care at all for their clients?) 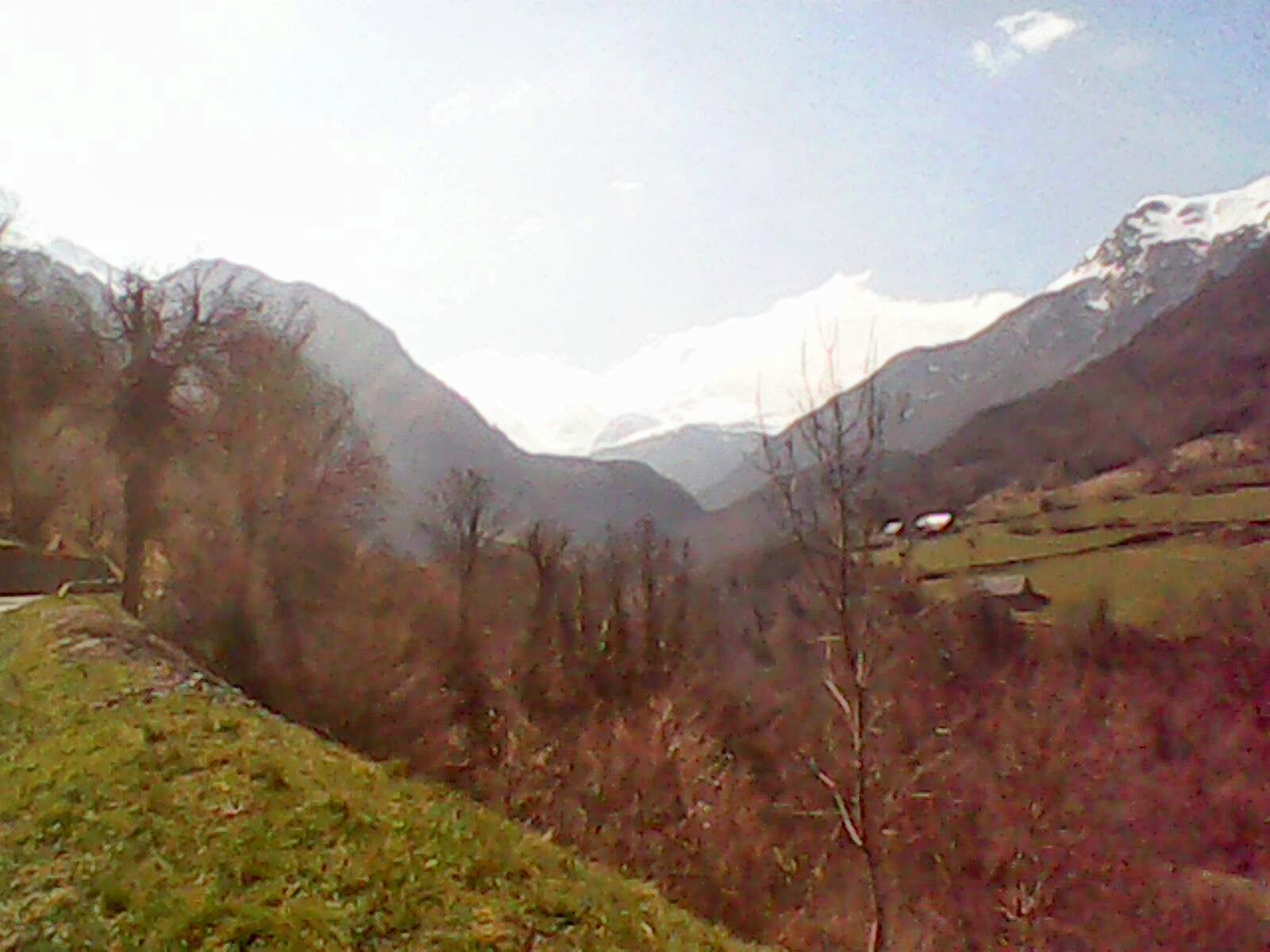 I will not dwell any more on food, except to mention the fat man who robbed me by taking the last three meatballs in Parthenay. For me the climax of the journey, excepting its ending in our village of course, was crossing the Pyrenees by a new route. We slept in quiet surroundings in the city of Pau, then traversed the great mountain range that separates France and Spain along a glorious road topped by massive snow-capped peaks. And we were spared the dizzying climb we normally endure up to Andorra by slipping through the heights is a long, boring, but totally free, tunnel. After that, in no time at all, we were in our own Spanish communidad, Aragon. 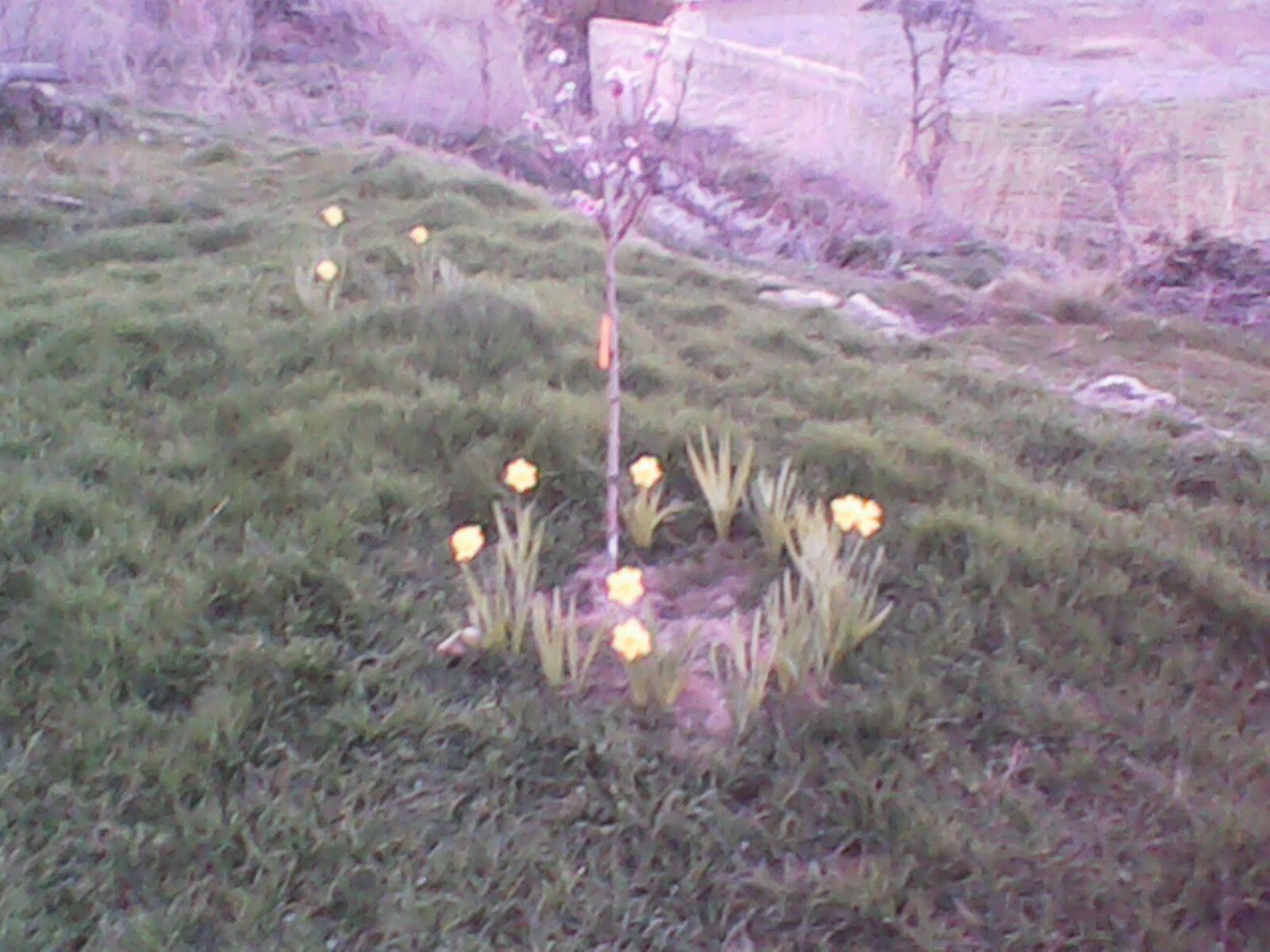 It is nice to be back in La Fresneda. This time we have only been away for three months and it is a little disconcerting to observe that some people in the village haven’t even noticed that we we’ve been away! Others ask us the usual two questions: when did we arrive, and when are we leaving again?


The huerto looks good, nothing has been stolen or damaged and our trees are bursting with buds. One, a peach, is already showing its wonderful red blossom, providing a suitable contrast to the circle of daffodils around it. The sun is shining strongly even though the evenings are a little chilly. It is nice to be home again, just as it will be nice to go home to England in May.
(Photos not so good - from my cheap mobile)
Posted by Rob Walters at 20:59 No comments: