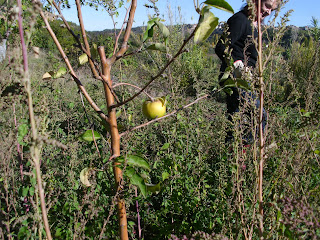 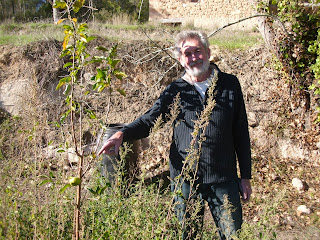 Please don’t get me wrong. I am not thinking of installing mantraps in the orchard which we are creating. We have now planted nine trees there and were delighted to find that, despite a very dry summer season here in Spain, the Granny Smith did bear fruit. On a slender branch hung one small apple and we were really looking forward to sharing it. But some kind passer-by ate it for us. Ah well, there’s always next year.
Posted by Rob Walters at 19:01 1 comment:

Having lived in Spain on and off for nearly twelve years and still not mastered the language I am in no position to make any grand observations on Spanish culture, but I have my opinions and everyone’s entitled to those. We are all individuals and all perceive culture from a very personal viewpoint.

We live in a village in Spain so my comparisons must reach out to Stow-on-the-Wold. That pretty place is the highest in the Cotswolds and before we left there a controversy of major proportions brewing. The town council had, following the example of nearby Bourton-on-the-Water, decided to install a comprehensive communication system. Loudspeakers were to be installed at many points in the town and then linked to the town hall. Announcements can then be made that will be within earshot of every resident. Information concerning forthcoming events in Stow will be given plus news of the death of any outstanding citizens and the time and place of council meetings. Every announcement will be preceded by a burst of loud music – and this is where the controversy lies. The council is completely split on this issue: one third favours the National Anthem, another Jerusalem and another Our Generation by the Who (for obvious reasons).

Naturally this is a complete fabrication, such a thing would not be considered for a moment  and the merest suggestion would cause a major explosion amongst residents so loud that it would be heard as far away as La Fresneda, our village in Spain. Yet La Fresneda has such an arrangement. It is called the ‘pregon’ and announcements are preceded by local music (called Jota) which sets all of the dogs howling. Not only does our village have a pregon,  I do not know of a village around here without one, it is just part of the culture.
So too is calling one’s wife one’s woman. How would that go down in Stow-on the-Wold? And the collective noun for parents is fathers and for children boys! Liberators gird your loins.

Car horns are used here to gain attention, or as a passing greeting, or just for the hell of pressing the button. Continuous white lines in the middle of roads on bends are regarded as advisory or at best as a warning to other drivers. I rarely undertake a journey here without seeing cars on the wrong side of the road: cutting corners is the norm. Spanish people are in a hurry; they drive very fast to complete their journey as quickly as possible then amble to their final destination.

Blocking the narrow streets of the villages is OK in Spain because that gives someone else a good chance to use their horn so that the owner can stroll good naturedly to the offending vehicle and move it.

The shops close at one and open again at six. The bars close only because everyone has gone home. It is quite normal for a musical session in a pub or wherever to begin at gone midnight. If you order meat as your main course, that’s what you get! No chips, no veg.

Young people here form clubs in their parent’s garages where they play music loudly and consume stuff. Many people crack their own almonds. The butano man calls once a week to sell bottles of gas, he uses his horn to attract custom. It is common to sit in a bar for many hours and not drink. Bars generall empty at nine as the menfolk go home to their dinner. They may refill later. There is a selection of police forces in the country. Spanish people have ceased to dance, they just sway to the music.

To the Spanish conversation is a competitive sport. To be a good listener is to be a bad sport. Here, real men drink small beers. The Spanish had conquests where others had colonies.

In Stow-on-the-Wold throwing rubbish onto the floor of a pub is a capital offence. In Spain it is an abnormality not to do so.

So what does all this add up to? Spain is a country of unliberated, rubbish throwing, noisy, horn addicted, strongly carnivorous, tippling,  late night party animals  who live in places similar to the that experienced by the Prisoner (do you remember that series, the whole place was also wired for sound). Anyway, how’s all that for stereotyping?

For myself I find little to object to and if I did then the obvious solution is to go home. Spain is supposed to be on its financial knees at present, though I see little evidence of that where we live - well away from the big cities. The problem, the Spaniards tell me is that the politicians are corrupt. So are the bankers, so are the big companies. Everyone is corrupt. What everyone, I ask. Yes everyone. That is a problem, that perhaps is the problem.

What I like most about the place is that it is different and, because I understand only a little of what’s being said, it’s also mysterious. Long may it remain so, and I think my woman agrees with me if only I could tear her away from the Daily Telegraph (delivered to my Kindle) and the Archers Omnibus (downloaded from the net).
Posted by Rob Walters at 19:01 1 comment: