I must confess that I did not see the baby burn; I was probably in the bar at the time drinking fizzy beer and sheltering from acoustic overload.

The event that brought together prostitutes, oranges and burning babies is a Falla. This is a Spanish tradition peculiar to the province of Valencia. Terry, who runs the pizzeria in the next village to ours, had told us that he was going to the Fallas at Benicarlo and we decided to go too.

It was a nice journey through our area of Spain, the Mataraña of Aragon, through a pleasant slice of Cataluña and finally into Valencia. For a while we followed the River Ebro and it is here that we saw orange groves and beside the roads sacks of oranges patiently waiting. Later, as we neared Benicarlo, we saw seated ladies beside the road also patiently waiting.

The ladies and the oranges have something in common: they are patiently waiting for clients. The farmers place the oranges there to make a few extra euros by cutting out the middleman. The pimp who, in a sense, is the middleman places the ladies there, though he may, or may not handle the goods. The oranges are a pleasant sight, the ladies slightly disturbing. However, back to the burning babies. 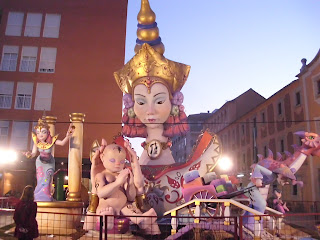 Terry had told us that Fallas are an annual event where Valencian townsfolk build castles and then burn them to the ground, the whole thing accompanied by lashings of fireworks. But we found no castles in Benicarlo. There they celebrate the feast day of Saint Jose by burning people.

Over the year each area of the town constructs complex sets of cartoon-like figures. The figures are very well made and very colourful. They seemed to be made of expanded polystyrene, but how they achieved such a smooth finish I do not know.

My favourite was a Chinese themed display which centred on a beautiful woman (top half only, yet extending to at least the fourth floor of the (very) nearby flats). Her hands seemed to rise from the ground and encircled a pudgy baby that she looked down upon with great love. The baby was unmistakeably a boy, of course. Arranged around her was a series of larger than life figures including a poor coolie dragging a cart loaded with boxes. Each box had a label: Armani, Gucci, Prado, etc. Behind the central figure, a Chinaman was holding a cat in one hand and machete in the other: dinner.

I did not see the Chinese baby burn. In the confusion I missed that particular conflagration, but I did see others which included babies. I also inhaled the black smoke that rose and fell from the burning ensembles and was deafened both by the firecrackers that ignited the figures, and by the fireworks that were stuck into holes unceremoniously hacked into them just before the off. 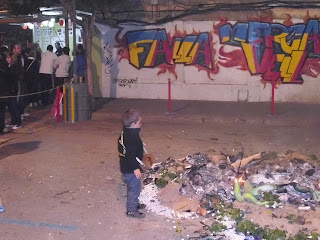 It was an intriguing spectacle but the real children of Benicarlo also fascinated me. Most of them carried a small box attached to a strap across their shoulders. Every now and then they felt inside the box, extracted a firework, lit it from a wick or gas lighter and threw it into the street, or down a drain, or down some stairs to get an echoing affect. Most of the fireworks were bangers, though not all. The kids ranged from early teens down to four years or so! Spain can be a bureaucratic country, but the stultifying hand of Health and Safety has fortunately not yet reached its heart.
Posted by Rob Walters at 19:46 2 comments:

I am now in Spain. The overloaded trailer and the van made it, though there were a few problems: one of the ratchet belts holding down the motorbike broke and the cover disintegrated as the wind and rain in England, then the wind alone in Spain.

We spent the first night in a town called Jaca (pronounced Haca) and the second in Solsona. Both towns are in the foothills of the Pyrenees and both are very cold at night for the poor folks sleeping in unheated motor caravans.

Jaca was pleasant. Its older parts have quite narrow streets and smart building with good shops (I’m told). The first bar we visited was the Old Station. Big and busy it was noisy, had a bar lined with people drinking and chatting and the barmaid gave me free crisps with my fizzy beer. It felt good to be back in our adopted second country. In the morning, out running in the cold sunshine and shorts, I saw the groups of skiers on their way to the pistes swaddled in their puffy anoraks. They mostly looked miserable and askance.

Solsona is not so attractive but, like Jaca, is framed in the distance by the towering Pyrenees so all is forgiven. Besides, we were there to visit relatives especially our middle grandson who talks to us constantly in Spanish which is hard work, but he is a nice lad. That night we took him and the rest of our complex family (don’t ask) to a restaurant of his choice. It was good and we were in our cold bed by midnight. In the morning when we called to say goodbye he was still asleep. He had been out again with friends until three in the morning. Oh to be seventeen.

The last leg of our journey took us through the lakeland of arid Aragon - miles of piercingly green water formed mostly by dams. We stopped at one of the lakes for lunch and there I met a man fishing: he had a copy of the Richard Dawkins’ Blind Watchmaker beside him and came from Pershore. In England we are near neighbours. Interesting to talk to he was, like me, dithering over the next generation of motorcars: hydrogen, electric, etc. 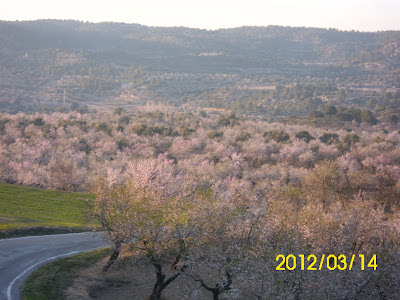 And then we were at last in our own region: the Mataranya. We had seen blossom along the way, but nothing beats the almond blossom of the Mataranya. It seems to float above the dry fields in clouds of pink and white. Hundreds of trees meet the eye, offset a little by the milky green of the interspersed olive trees. The economy is shot, fifty percent of the young are unemployed, the Rumanians are still here, but it looks like being a bumper year for almonds. 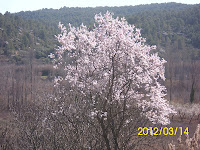 It was good to be back. I drove straight to the huerto and uncoupled the trailer. We then stared wistfully at our own almond tree. We only have one and we thought that it was dying. But there it was in full blossom. Lovely.
Posted by Rob Walters at 19:09 1 comment:

It’s about 11 pm and after two well deserved Belgian beers, I am relaxing. I had planned a last pint or two of real English ale, but it was not to be: things closed in.

During the past week I have bought: a motorbike, a trailer to transport it in, a rotavator (biggish one), a cement mixer, a tow bar to pull the trailer, and chains, locks and cables to secure the stuff against thieves.

The trailer is quite low and the motorbike quite high so I couldn’t get the thing into the trailer with the cement mixer, rotavator and so on. I called a friend and he agreed to come around to help at midday. In the morning the fireplace man came to view the blackened, ugly, bricky hole that for some time has been awaiting the stone fireplace that he offered us at a special price. He outlined the problems: the ‘cheeks’ of the fire area project a little too far, also the cheeks are too high and the uprights shouldn’t really sit on a floorboard.

I want to fit the fireplace myself but I sometimes think that the fireplace man really wants to do it. He told me that I would need a ‘throat lintel’, yes a throat lintel, don’t you know what a throat lintel is? I certainly did not, but he told me that most builders’ merchants stock them, though they are often known by another name. Also, I would have to cut off the top of the cheeks with an angle grinder. And I should replace the cracked back plate and I might as well replace the whole fire back while I am at it. I finally announced that I would remove the fire back and then decide what to do next and he nodded – a wise decision, I think. And so the new fireplace becomes a thing of the distant future and our lounge a sooty, no-go area.

I asked the fireplace man if he liked motorcycles, he looked the type. He did and he had sons that did. I asked him if he would help me load my bike onto the trailer. He was more than willing and, while I ponced around deciding how we should do it, he pushed the thing onto the trailer on his own! I felt an idiot, but this man does spend his time lifting fireplaces and dealing with throat lintels, and even his sons ride motorcycles.

I cancelled my friend and continued with the preparations: securing the bike, chaining up the rotavator and mixer, loading in other essential stuff: a curtain rail, a sunbed, flowerpots. By this time the four tyres of the trailer looked quite flat so I had to take it to the garage to pump them up. On the way I noticed that the indicators on the trailer no longer worked. They had done, you get a pleasant beeping from the back which is supposed to reassure that the trailer is still there. However, there was no beeping so I had to spend the rest of the night sorting out the wiring. No beeping, no beer. Hence a late night with an Angel or two – it’s a type of Belgian beer.