A baby, a perfect pub, friendly French and a ruined roof repaired

Our latest journey to Spain was circuitous. We left the Cotswolds very suddenly to visit Dublin in order to wet the head of a new grandson – Conan. We slept near the ferry port at Liverpool and the only place we could find to park the motor caravan was behind some sand dunes which overlooked the Mersey River.  It was my birthday and the search for a suitable pub became frenetic, yet ended with the perfect place. The Edinburgh had great local ales, three very different bars (local, lounge and quiet room), wonderful pub architecture and friendly staff and customers. Next morning I ran over the dunes and was amazed to see the beach full of people dotted all over the sands. After a while it dawned on me that only one of them, another jogger, was moving! I had inadvertently chanced upon Andrew Gormley’s Another Place. I inspected one of the cast iron Gormley replicas and found a number on his wrist tag – the number was the year that I had celebrated the night before – weird.

Conan is a fine looking baby and my son and I celebrated his birth in the usual fashion and at great expense in the heaving pubs near his flat in Dublin. Next day Margaret and I drove south to catch the overnight ferry to  Cherbourg, and had a merry time mixing with Irish holiday makers in the entertainment bar during the evening. Perhaps we were preparing ourselves for Fran

After a day’s driving we tried to find a village or town where we could spend the night and get a meal and a drink – in France on a Monday night - near impossible. After visiting three places, all quite dead, we found somewhere north of Nantes that at least had a pizza van. We parked there and made our way to a much advertised restaurant – closed of course. But we did find a bar open. It had one customer and he was as pleased to see as the barmaid was. We four became instant friends despite the language barrier (we used our computers to translate) and Marie Laure insisted that I talk to the town’s resident Irishman on her mobile phone. He seemed as bemused as I was. The only other customer, Chico, rushed out of bar when he heard that we had not eaten returning after some time with two large pizzas, no doubt from the van. We drank we laughed, we wore funny hats from the bar’s collection and we photographed ourselves. At one point some poor local tried to join the party, but was quickly told that the bar was closed!

Then came payback time. I put a 50 Euro note on the bar, but they would not take it though I was quite forceful. The beers were on the house and the pizzas on Chico. And there was more. Marie Faure insisted that I move my camper to a beautiful spot beside the lake and then she and Chico piled in to have a drink on us. Aren’t French people nice?

One thousand miles out of Cherbourg we finally arrived at our village – La Fresneda. It is always lovely to return, and to be greeted by folks who wanted to know why we had been away so long. However, most of them had heard that Margaret had had an operation. The village rumour machine works very efficiently. Our huerto was overgrown, of course, and I had to face the debilitating task of retiling the ruined roof. I reckoned that the supersized hailstones had wrecked at least 75% of the traditional upper tiles and bought 300 replacements. It took me a week to remove the wreckage and re-tile but it’s done – the only thing left to deal with is the shattered solar panel. But that can wait, since, though almost destroyed, it is still producing some electricity.

On the Brexit front we have quickly ascertained that our village is quite neutral. There are only two other UK voters in the place and when we had them round for a few drinks we soon confirmed that they had voted to stay and we had voted to leave, so we have cancelled each other out. It still leaves a question for them to answer though. If, as is claimed, the EU is so good for the economy and migration boosts it further, why are so many countries like Spain in such a parlous state? We are told that unemployment is still around 50% for the young here and the economy is flat or worse. And then there is the question of Gibraltar, often seized upon by governments here to deflect attention from more pressing problems. But that’s Another Place where perhaps the cast iron replicas of the artist are replaced by – apes?
Posted by Rob Walters at 14:05 1 comment:

Preparing the soil for Brexit, or whatever

With under a month to go before the UK makes its momentous decision, claim and counter claim are reaching hysterical heights. Still stuck in the UK, but with my postal vote already waiting in Spain I am woken each morning by the Today radio programme and the latest astounding announcements. We are told that wages will fall and prices will rise, or taxation will fall and democracy will rise. Meanwhile yet another large group of experts have simultaneously written a letter saying that we should stay whilst a survey shows that small businesses think we should go. Barrack barracks whilst Borris buffoons, David directs as Nigel neglects his position as a proportionately elected MEP.

Sequestered in Stow, permanently on the verge of departing for Spain, I miss the intellectual stimulation of Oxford and ponder whether anyone, yes anyone, is intellectually capable of making this complex in/out decision. Yet we all have a vote! One of my many casual pub acquaintances told me that no rational person could think of voting to leave, and addressed the migrant question by informing me that he once had a Romanian boyfriend so they are alright.

Meanwhile, as my wife waits anxiously, and impatiently, for yet another grandchild to arrive, I’ve not been idle. I’ve been doing my bit for Britain by upping our food production capability ready for our departure from the EU or our continued membership of it. We currently own part of the field behind our house and are engaged in a long legal tussle to get the lot and, regardless of the outcome, I have extended the vegetable plot. This has introduced me to a new skill: post and rail fencing. Hard work, but it looks nice provided that you don’t look too closely. That done I then had a large area full of weeds to deal with and chose the cardboard and muck solution: covering the whole area with flattened cardboard boxes to rob the weeds of light, then spreading five tons of cow manure (muck) onto it to keep the boxes down and provide the goodness to grow potatoes and onions over the dying weeds. Perhaps the answer to the question – to leave, or not to leave – will emerge from the darkness of my manure heap where, beneath the light excluding cardboard, the weeds are screaming “to leaf or not to leaf”. 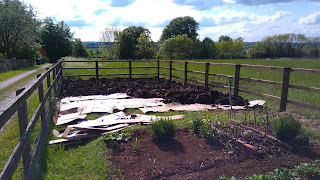 A local beef farmer brought the muck in two large trailer loads and, on each occasion, turned off the tractor’s engine once he had dumped the stuff in order to chat – he doing most of the chatting.  His diatribe covered everything from the modern tendency for women to tend allotments through the various means of catching rabbits to, of course, Brexit. On that subject he told me that his heart wanted to leave, but his mind wanted to stay – a common dilemma. He explained that he depended on the farming subsidy he received and didn’t trust the UK government to keep doling out the money. Meanwhile he thought that the EU would continue to feed the farmers “cos them Frenchies and Gerries knew how to ‘old ‘em to it”.

There are so many points of view and perhaps the answer does lie in the soil: mud’s thicker than water. Most of the foreign groups that I show around Oxford do think that we should stay, though one Italian I met whilst passing through France suggested that we should leave saying, “You were never really part of Europe anyway.”

You can still try my Brexit calculator if you wish, just click here. Based on the small number who have chosen to share their results with me its showing -0.75. An absolute outer would score -4 and an absolute inner +3. So it’s tending towards out at present – but not by muck, oops, I mean much.
Posted by Rob Walters at 15:56 No comments: