This year we’ve had stunning crops in England, and news of drought in Spain. The garden in the field at Stow has overwhelmed us - and our neighbours have benefited from our surfeit. We’ve been feasting on potatoes, peas, beans, aubergines, radishes, lettuce, cauliflower, calabrese, savoy and sweet corn, oh and Margaret’s startlingly yellow courgettes plus some very nice plums and delicious raspberries. It was really difficult to tear ourselves away, but we did, not even stopping at our home from home in Dover before landing in France and making a toll road dash for Rheims. 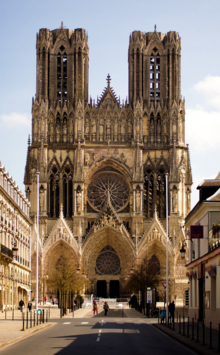 Why Rheims? Nothing to do with gardens at all.  Shortly before leaving Oxford I attended a riveting lecture on the evolution of church architecture across Europe and Rheims cathedral was highly praised.  Always difficult to park a motor home in a city overnight of course, but we managed  to find a place within walking distance of this vast, highly decorated, gothic creation of the 13th century where many monarchs had been crowned and Joan of Arc is vividly remembered. I was entranced by the dual towered entrance facade and really moved by the spacious interior. But enough of that, we had nearly a thousand miles to go before we would get to our Spanish garden.

Late on our second night we drove into a small town called St Pierre La Moutier which seemed quite an interesting place on the map. However, we quickly realised that we had made that same choice earlier in the year and found it quite dull except for the bar which was quite lively. No restaurants were open then so we had to dine on unmemorable take away pizzas. This time even the bar was closed and we dined on...

Next day, we said goodbye to St Pierre for ever and headed towards Toulouse in the hope of seeing its cathedral and visiting our grandson who lives on the other side of the Pyrenees. Neither event happened for various reasons, but on the way we did get to stay the night in Cahors, a city of France that we had always avoided for no particular reason. It was lovely. The river Lot embraces Cahors in a graceful horseshoe; the main streets runs through the centre of the place and is lined with wide pavements fronting busy shops, bars and restaurants; and that street separates the old quarter from the new where even the latter is attractive, especially the stunning bridge that crosses the Lot on that side. The cathedral, a twin domed building, lies in the old quarter of course - an area laced with narrow streets and many bars. We found one near the cathedral which sold the famous Cahors wine (Malbec) and where everyone kissed a lot – except us.

We left Cahors vowing to return one day for a longer visit, roared through Toulouse and then crossed the splendid Pyrenees through a pass which I would not recommend to anyone in a motor home or in fact in any motor: constant tight curves always rising steeply through narrow roads lined by tall menacing trees. But it did lead us to Formiguera, an alpine-like town with crystal clear air and stunning views over a high green valley.

It was in a bar in Formiguera that we met an ex-pat who had lived in France for thirty years and knew it all.  He sorted me out on subjects ranging from real ale to Brexit and told me that he had once earned a fortune selling more than a thousand ice-creams a day on the beach in St Tropez. Fascinating.

More twists and turns as we threaded our way down through Cataluña, our belligerent neighbour which soon intends to foment the breakup of Spain through an illegal referendum. We reached Aragon, our own section of the country, unscathed and were soon looking over the five terraces of garden that is, as they call it here, our huerto.

Desiccated it certainly was, but the drought had at least kept the weeds under some control. My irrigation system, a constant work in progress, had silted up yet again, but had probably got the trees through the worst of it. One tree, growing where a joint in my plastic tubing had split, was doing extremely well; others were looking parched, but may recover. I began emergency treatment – buckets of water and intense drip feeding – hope it works. On the plus side I found some potatoes in our overgrown veg patch, handfuls of delicious grapes on the feral vines and even some small apples on one tree. No almonds, but the olive trees that I had pruned mercilessly the year before had survived and were bearing some fruit.

Margaret’s cacti up on the sun terrace of the house survived of course. Perhaps cactus gardening’s the thing. Prickly pears anyone?
Posted by Rob Walters at 15:38 No comments:

Pub life: to vape or not to vape

I like pubs. I really do. When guiding in Oxford, I often position my group near a historic pub then tell them proudly, “I am an expert on pubs, I do pub tours – though sadly not often. Nevertheless I have to go out every night to check that the pubs are there, test the beer and so on.”

“It’s a hard life,” some wit often commiserates with a smile. And I nod solemnly in agreement. Of course, it’s not true. Well not exactly.

Recently, in order to supplement my knowledge of the local beer scene ready for future pub tours should there be any, I had to visit a new local brewery with a group of elderly gentlemen - of which I felt the youngest, but was possibly the oldest! The brewery was located within a desolate industrial estate, but the beer was good (and free) as were the burgers which helped to keep us warm. Afterwards I called at one of my locals where swearing is not permitted. Surprisingly, during our conversation the landlord accidentally used the ‘f’ word! He put his hand to his mouth then meekly placed a significant coin in his own swear box. Rules are rules. But what happens when there are no rules?

On the following evening I visited another local pub for an injection of the blues. Great group, really strong on the harmonica, but too loud for my failing ears, so, in the break, I headed to another of my watering holes where I have become somewhat acquainted with the owner. We talked for a while and I was about to tell him about the book I am currently reading when I realised that his focus had wandered. No, not wandered – his attention had become fixated on two gentlemen on the next table. The reason for this quickly became apparent: one of them had strongly objected to the man on the next table vaping – had, in fact, firmly asked him to desist. My man had decided that my latest book was of much less interest than this debacle and, being an ardent vaper himself, engaged the objector in a vigorous pub discourse.

At first I could not understand what the problem was so I intervened by asking the objector what he objected to – and the answer was that he feared secondary vaping might injure his health. Fair enough.

“What evidence have you for that?” asked my man leaning forward in his chair.
“I am a researcher in health related topics and it is clear that insufficient time has passed to have an opinion either way. However, since there is a possibility that the vapour might damage my health I do not wish to be exposed to it.”
“But I have seen a TV programme where experts concluded that there is no risk from direct or indirect exposure to vapour,” stated the landlord forcibly.
“That conclusion is based on a very short time period in comparison to the human life span. It took a very long time to clearly link tobacco smoking to lung cancer. Without such long term evidence I would rather not expose myself to a potential risk from vaping.”
“Are you saying that that we should have a rule banning vaping in this pub?”
“No, only that if people vape here, I would rather go elsewhere.”
“I and my colleague...” At this point it became evident that the vaper who accidentally initiated the confrontation and had since been silent actually worked in the pub.
“I and my colleague are perfectly willing to go outside to vape if that would make you feel more comfortable.”
“That would not make me feel more comfortable since then I would be driving you from your own pub.”

At one point a googly was delivered when a vaper claimed that vaping was better for his health than smoking cigarettes. This was quickly returned by recalling that smoking inside pubs had been banned because of the reputed danger of secondary cancer from cigarette smoke in inhaled by non-smokers. And so the argument went on. I did not join in since I could see both sides of the argument and, recalling the introduction of the smoking ban and the loss of so many pubs that followed, I did not want to further ignite the discussion.  Finally the anti-vaper and his friend (whose only contribution was a blanket assertion that vaping should be banned) left, creating a communal sigh of relief and a great deal of intense vaping.

In their absence they were somewhat disparaged and accused of being pub spoilers. They were seemingly part of the Thursday effect, this being the worst day for complaints in pubs, or so it was claimed.

I walked home smiling to myself. It had been a good to and fro. However, the outcome could be that the anti-vapers would not come into the pub again since the discussion did stray beyond the argumentative towards the aggressive, though there was no one used the ‘f’ word and no fines.

Still, that’s pubs for you. Better to let it all out than to bottle it all up.
Posted by Rob Walters at 18:57 No comments: