An old friend and colleague from the past spotted this astounding fact as he browsed through old blogs (don’t know why, bit like raking through the dust in someone else’s attic I suppose: an attic that is open to all). Yes, it really is ten years to the day that I launched my bookshop, robsbookshop.com, onto an unsuspecting, puzzled and mostly unaware public.You can see the original announcement here. This blog was initiated just a little earlier than that.

I cannot pretend that it has been a roaring success, though I did enjoy building the Literary Pub with all of its silly bars and I still find them funny. Last night I went out to the real pubs of Stow on the Wold and found them unreal during this covid-19 pandemic: we were refused entrance three times owing to lack of free tables; we were granted entry to two and sat there isolated as a vizored waiter failed to communicate with me; the range of ales available was pretty much unity and the atmosphere was lunar. So, in sympathy, I have taken a dump of robsbookshop.com with a view to removing the Literary Pub entirely – soon there will be no virtual pub unless a computer virus reinstates it, which is unlikely. Besides, the links were wearing out and maybe the humour as well.

I guess my most successful book is still Spread Spectrum: Hedy Lammar and the mobile phone though I am not sure how much robsbookshop.com contributed to that success, if at all. My fiction has not done well, though my own favourite novel, Shaken by China, did have an early spike. At first I actually sold and delivered paper books through the site, but that proved impractical and it is now mostly a repository for all of my titles which then passes sales on to, mostly, Amazon.

I think I’ve added six books to my list since the launch and there are three more ‘in the pipeline’. During that time I have put up nearly 200 blogs, roughly 20 per year with a peak of 26 in 2014. Why do I do it? Perhaps the answer lies in a quote from the novel I am currently reading (The Gustav Sonata) where Lottie asks Gustav ‘Why do you have to do anything. Couldn’t you just be?’ Maybe. 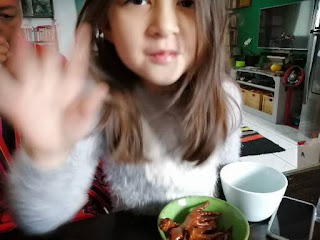 My granddaughter eats chickens’ feet! Doesn’t that demonstrate just how diverse we have become as a family? Not really.

And yet, people eat a lot of chickens, According to the Vegetarian Calculator the average person in the USA consumes 2,400 chickens during their lives. That’s 4,800 feet which, if not consumed, are wasted. Surely that’s not good for the planet!

When I kept pigs I read a lot about them. One of the anecdotal stories suggested that a farmer’s wife could use every bit of a pig bar its grunt. It was a silly statement because dead pigs do not grunt, but you take the point. My daughter had a taste for pigs’ trotters, though I always suspected she ate them for effect rather than satisfaction and I can at least excuse this indulgence since there is considerably more meat on a pig’s trotter than a chicken’s foot.

Many people in the world eat insects and in China we saw a great variety of exoskeletal treats proffered at market stalls. I did not try them because I do not like them, even though I have not tried them. In Cambodia I watched a young lady vending grubs. I did not see anyone buying them, but she liked them. Every minute or so her hand strayed towards her display, plucked a nice fat grub and popped it into her month and then munched contentedly. The grubs were rather fat, like overfed maggots – and so was she. 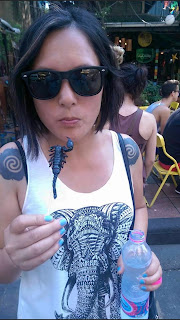 There’s more on the insectivores. This blog has led to the discovery that my daughter-in-law is partial to the odd insect. With certain conditions she has allowed me to include a photograph of her munching a scorpion. At first I thought the creature was floating towards her willing mouth, but if you look closely you will see that the creature is on a stick – like a lollipop or scorpionpop.

When I was a boy we used to go levering. Elvers, I’m sure you know, are baby eels. To catch them we had first to dig up lots of worms. Then we, rather cruelly, sowed the worms onto threads, tied then all together in clumps and finally to a weight: this we attached to a stout rod with a strong cord. We then went forth to the Pill, a tributary of the River Severn, at the correct season of the year and dangled our worm clumps into the freshwater inlets that attracted the baby eels. They would hook their mouths onto the worms and we would lift them out and wipe them off into a bucket, time and time again. Might it have been simpler and equally nutritious, I now wonder, to eat the worms?

Back home my Mum would fry the elvers for breakfast and they were rather nice. Oddly, whilst writing this piece I picked up a BBC article with the headline: “Illegal elvers worth more than caviar on black market”. We could have been rich! And in a way we were, we also ate adult eels and flatfish that we caught and moorhens eggs that we stole from their nests, always leaving two behind. My mother always claimed that I and two other boys had eaten a dead seagull during one summer holiday. I have no recollection of that, but we were all three seriously ill later that year, missing almost a year’s schooling.

It is said that you are what you eat and I feel happier being part elver than I could ever feel about being part chicken foot. But what else can be done with the feet of so many chickens that are killed to provide Sunday roasts and chicken cutlets. I have a solution. When we had a small holding I killed our chickens as humanely as I could, then plucked them and removed their feet exposing the ligaments that had given the chicken control of its leg movements. I then chased our children around the farm whilst pulling on a ligament so that the foot seemed to be grabbing them. It was something to do. The chicken did not mind. It had passed into chicken heaven where its legs were extra long and fat edible grubs grew plentifully on trees.

(P.S. My son claims that he and I once did eat a chicken’s foot in Taiwan for a dare. I have no recollection of that and may have been drinking that country’s chicken soup laced with very strong rice wine at the time.)