Rob and Rob in Oxford

Conducted my first Hen Party around Oxford on Saturday– has it come to this? Actually they were quite sweet – laughed at some of my quips, with a little prompting. Hope Becca enjoyed it.

I like to spend my birthday in Oxford with my wife. No party. Drinking taking primacy over eating. Lot’s of stuff. One of my most memorable was when I clocked up six physics lectures, then off to the pub. This one was a little more refined.

First we wandered into the centre where there was music at the Wheatsheaf all afternoon. It is still odd to go into the old place: to look around and wonder ‘What if?’ – it’s at least twelve years ago that I tried, and failed, to buy the place. The music was OK and the beer was OK (Doombar). In fact the best of the three acts was Tony Batey, the blues man who has been playing Oxford for all the years that I’ve been here and many more. I thought that I’d been over-exposed to his music, but it was good, very good – and his guitar playing is superlative.

Then off to the refinement: Somerville College chapel for a talk plus performances by the choir. The latter was wonderful, the girls could ‘lift the roof’ and I thrill to that. The talk was, well, boring really. Still, one must sup for your singing I suppose. Next a quick pint (Doombar again, drat it) in the Royal Oak, which is almost opposite the college, while we waited for the #6 bus to Wolvercote and nearly missed it. 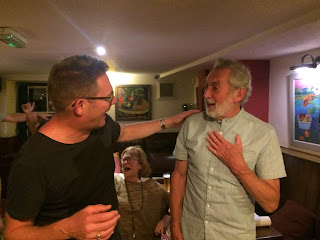 Wolvercote has two pubs in very close proximity: Jacob’s Inn which is an eatery where we ate and the White Hart where we dank and sang. The White Hart is now a community pub and a fellow writer is one of the directors. It was Sheila who told me that they sang sea shanties there on Sundays – and I like a good sea shanty. The beer was excellent (Spring), but the pub was a bit quiet. Sheila wondered if they had enough people for the shanty session. But we joined in, and then a group of blokes from the other pub staggered in and soon we were ‘lifting the roof’: there was even a shortage of song books. We sang ‘Leave her Johnny, leave her’ and ‘What shall we do with the drunken sailor’ and many more shanties that I had never heard of, but thoroughly enjoyed. The beer flowed and songs were sung and then something ridiculously odd bubbled to the surface. During the gaps between songs people chatted and somehow it became clear that the group of blokes were there to celebrate one of their number’s birthday, like me. Then it became clear that his name was Rob, like me. Then, now you are not going to believe this, but it finally emerged that his name was Walters, like me! 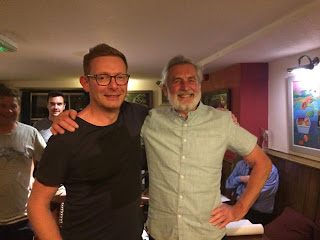 Can you imagine the excitement that caused? Buoyed up by beer, lifted by song, then this most weird coincidence was discovered. I’ve never met another Rob Walters before and nor had the other Rob Walters. Two Robert Walters’s in the Wolvercote White Hart on the same night, singing sea shanties and celebrating their birthdays – he fifty – me twenty-one years his senior. I could have been his dad, but we are pretty sure that we are not related. Then, to my delight and surprise, a very good friend turned up with his wife - and his name was – no that would be too much, his name was Peter. Great night. Wild night.