Exciting news in the colourful world of squirrels

In an earlier blog I disclosed conversations I had with French and Spanish red squirrels, and recently there has been a surprise twist to the vexed question of grey squirrel immigration involving none other than the Great Protector of redness, Prince Charles.

The Great Protector is the founder of the grand Squirrel Accord which states in its website that ‘Grey squirrels need controlling because they are causing major economic, social and environmental damage to the broadleaved woodlands of the United Kingdom. The grey squirrel (Sciurus carolinensis) was introduced to the UK from North America in 1876 and its population has grown rapidly since then. The problem of grey squirrels was first recognised in 1930 when a law was passed making it illegal to release a grey squirrel into the wild.’

The Squirrel Accord points out that the freedom of movement granted to these interlopers has brought with it the pox which is spread by the greys and kills the reds. You may also recall from the earlier blog that French red squirrel accused the greys of ‘breeding like rabbits’: a point which has clearly been taken up by the Great Protector.

Squirrel Times recently reported that the Great Protector ‘is supporting government-backed plans to sterilise grey squirrels to protect native reds and save millions of broadleaf trees. The oral contraceptive, lasting several years, would result in a population crash, reducing numbers by more than 90 per cent from 3.5 million to fewer than 300,000, scientists believe. Prince Charles favours the idea partly because it is a humane alternative to culling. No grey squirrels would be killed under the scheme but the contraceptive, which could be concealed in chocolate spread, would prevent millions of births.’


I contacted French red squirrel about this news, he was aware of it and appalled that chocolate spread would be made available to the greys and not the indigenous reds. On the contraceptive issue he thought that culling was the least that the greys deserved for “coming over here and killing our trees”. Spanish squirrel was more restrained. He welcomed any move that strengthened the brotherhood of squirrels but he also felt that chocolate spread should be available to all squirrels though the contraceptive element must be optional. He praised the efforts of the Great Protector but was critical of his continued ownership of vast swathes of forest which he stated should be transferred to the Squirrel Brotherhood to be operated as a not-for-profit collective.
Posted by Rob Walters at 12:51 No comments: 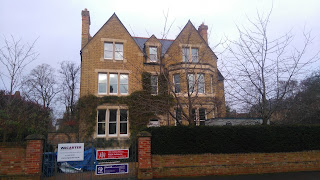 There is no doubt that Oxford is a strange place: rare, desirable, bubbly, historic, intellectual, expensive, etc. Regarding the latter, on most of my tours I provide a short introduction stating that “I’m Rob Walters and I live in north-central Oxford where the rich and famous of this city live.” Then I pause for effect, before confessing that I am not rich or famous and live in a small flat. Dependent on reaction I then turn to my latest shocking housing report. When I first started guiding at least a decade ago I could shock my groups by telling them that a house in my area had recently sold for more than two million pounds. That was more than a decade ago and there has been some inflation since then. My latest example is a nine bedroom detached house in Crick Road which has recently sold for £10,400,000! Some inflation.

To re-establish my own credibility as a guide I go on to explain that you could buy my whole block of flats for that money and still have plenty of change. I also sometimes add that I do not know who lives in these obscenely priced mansions, but that is becoming less true. Recently, in one of my local pubs, I fell into conversation with a garrulous builder who told me that he was living in a big place in (highly desirable) Park Town. But his residence was temporary: the house had been rented for a year or so to provide accommodation for a team of workers who were renovating and extending the house next door. That house, he told me, had been bought by...can you guess...a football player! Furthermore, I have been told of someone nearby who downsized by selling their expensive home to a character who made a fortune from running an on-line gambling concern! And this is the area once occupied by the, so called, ‘Dons’ of Oxford in the late 19th century. 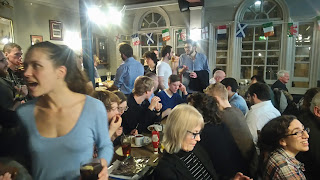 Another view of the city is provided by a meeting of Skeptics in the Pub. It was a Tuesday night and the theme of that evening’s talk was science: particularly controversial science such as climate change and genetically modified crops. Now many pubs are lucky to get any visitors at all that early in the week, yet the St Aldate’s Tavern upstairs room was rammed full of people. Even standing space was in very short supply. And all for a talk on science, though it turned out to be a little more.

The speaker was Mark Lynham, a reformed GM crop destroyer and self labelled ‘environmentalist’. Mark told us that he had studied physics as an undergraduate. Presumably unable to procure a decent job in that world he travelled and on the shores of Lake Titicaca had a supreme awakening that launched his career as an ‘environmentalist’. In this guise he first became a leading opponent of genetic modification of crop plants, then a global warming evangelist. Another awakening followed when Mark realised that all of the facts underscoring his belief in the evils of GM crops were not scientific facts at all! He checked the science and became a proponent of GM, apologising for his earlier, ill-informed actions and determined to make amends. And through this he became a true defender of truth in science: even to the extent of attacking the holy green grails of organic food production and the misguided preference for ‘renewable’ energy production over nuclear. The latter is very dear to my heart as we, in Spain, look with weary resignation over the encroaching forest of windgens uglifying the beauty of our nearby mountains.

As I write this blog, no self-respecting speaker in Oxford is able to conduct a session without having a dig at Trump. And of course Mark did dig. But, in addition to the usual rants against the new President of America he tried to solve the outstanding mystery: just how and why did this millionaire, hotel owning, reality TV host get selected as the ‘most powerful man on earth’. And here he fell back on his original theme to develop an answer. Basically, many people do not believe the ‘experts’ anymore, they do not think that they are capable of speaking the truth. And of course we can all think of examples that substantiate that belief – the opposition to GM crops being one. And then along comes someone who people feel they know (from TV), an apparently self-made man, a man of great confidence who is seemingly a visionary providing simple solutions to complex problems, hope to the hopeless and jobs to redundant coal miners.

I think that Mark has matured with age, though some label him a turncoat who is creating a new career through his support for GM. I do not agree with all of his environmental beliefs, yet it is refreshing to hear realistic answers even when they do not fit the bill of ‘saving the planet’. He has no doubts over the reality of global warming and its causes, yet when asked if the Paris agreement, now under threat from denier Trump’s zeal, would really make a difference to climate change, he said no! What was making change, he argued, were the moves already in place to replace coal with cleaner sources, in which he even included fracking. He said, I think with pride, that there were now coal-less days in the UK: days when no coal was burned to produce electricity. That’s nice, except, of course, for the miners.

On the following evening I attended a talk on space exploration in which it was proposed that Donald Trump pilots the first manned flight to Mars. Not really, actually, surprisingly, he wasn’t mentioned.
Posted by Rob Walters at 13:06 No comments: