English Heritage and the Death of the English Pub

We have a new second-hand camper van! It has a fixed bed and table and other luxuries which wild campers and one night stayers relish.

We have also taken out a years' membership of English Heritage which gives us free access to hundreds of ancient building across the country.

Recently we combined the two by taking the camper van on its first outing and visiting a number of castles, stately homes and such to the north of us. The sites we visited were great, the state of the pubs we passed was dire.

Let's take Bolsover. We didn't like it at first so went searching for other places to stay. We tried two nearby villages. Both were run down, both had boarded up pubs and clubs. It was depressing and a little scary. Sufficiently so to send us zooming back to Bolsover which then looked quite attractive! 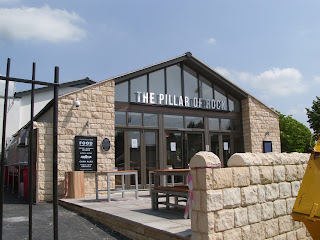 We found a free car park which was quiet and had a space big enough for the van and then set off in search of beer, food, and good company. The pub near the car park was OK...just OK. Beer was cheap and local and decent. The place was a bit corporate, quite large and largely deserted. We had a drink and went out to explore the town, soon coming to a nicer looking pub. It was closed! Not permanently I think, just closed because there was no one about on a Tuesday night. We walked to another place standing next to the castle. It was closed, in fact it had not yet opened. It was a Wetherspoon place due, we later learned, to open in a week or so. It was called the Pillar of Rock. 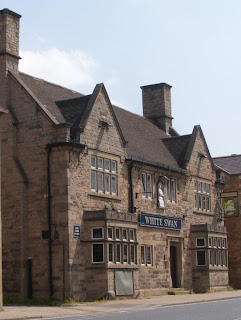 We walked further up the hill and found another pub which was open, but should not have been. It smelled inside and the garden was an untamed jungle of rotting picnic benches surrounded by litter. No one spoke to us and the beer was well past its best, as was the pub.

We shared a nasty bag of fish and chips whilst gloomily watching other people popping into the various take-aways. Then we found a smashing looking pub on the main street, but on closer examination it was closed and up for sale. Then another nearby: closed. We returned to the first pub and sat in its yard where we watched  the cavortings of a dog with an enormous head and worried about the pub scene.

I know the stats. I know that many pubs are closing each week.  I know of many pubs that have closed. But I have never seen, or imagined, anything like this. Not on this scale. This is indeed the end of an era. To quote Hillaire Belloc once more (after carefully typing his name), ".... when you have lost your Inns drown your empty selves, for you will have lost the last of England". Don't worry too much though, Belloc had not heard of Wetherspoon and was not a member of English Heritage!
Posted by Rob Walters at 21:03 1 comment:

Like proverbial London buses: you wait for ages and two come along together. So too with my blogs.

A few years ago I became a shoeshiner, cycling around middle-England shining shoes in the streets, pubs and offices of the old shoe-producing cities. Naturally, I wrote an account of my adventures, publishing it as an eBook in 2011. Someone has asked me to do a presentation on this subject in August and I realised a simple fact – you can’t take eBooks along with you. So I decided, with some trepidation, to turn the eBook into a paper book. The trepidation is a hangover from producing the first edition of my Hedy Lamarr book in this way some eight years ago. It was an awful experience, and costly, and I was never happy with the look or the quality of the book.

I would not say that making Being Down, Looking Up into a paper book was a doddle, but it was so much easier than those tense weeks all those years ago; especially concerning cover design. And the process is now free! I’ve already received the first version and with a few changes (you can never be sure of a book until you hold it in your hand), my first order is winging its way to me from the States. 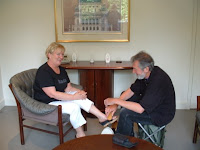 I did make some changes: I included photographs, did a light edit and produced a new cover. It was really interesting to read my own account through again after all this time and it really brought the experiences back to mind. Some things I had forgotten, yet reading about them revitalises the memories and seems to refresh them. I suppose the brain is remaking connections to recollections that have eroded through lack of use. It does convince me that it’s all up there somewhere, though access may be lost. Maybe keeping a diary is a good thing after all.
Posted by Rob Walters at 12:39 1 comment:

On Tuesday I set off from Stow-on-the-Wold to walk to Oxford. Not a great distance for some I suppose, but my friend and I did not hurry. We completed the thirty plus miles in two days. Our last walk together was just about a year ago. We began that at Yoxford, in Suffolk, and headed for Oxford. My friend did not complete the walk: he lasted just three days before dropping out with badly blistered feet. I trudged on alone and it was during that long walk that the idea for my current book occurred. 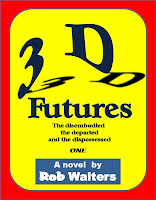 3D Futures is, not surprisingly, set in the future! It is my first venture into this genre and I really enjoyed writing it: the future is an unknown and the imagination consequently untrammelled. It has three stories running in parallel: in one the rich and clever have left the earth, living forever below it, their minds existing in digital form in highly secure servers; in another a large number of people have escaped the earth in order to colonise distant planets. The earth itself is therefore left to the dispossessed and it swiftly descends into anarchy and violence, though the green shoots of civilisation are beginning to emerge. The stories are about people’s lives in these extreme situation and, though separate, are linked in surprising ways. The whole thing is held together by ‘historical’ digressions which provide the background to the three worlds.

I uploaded 3D Futures to the Amazon’s Kindle store on the day after completing my Costwold walk whilst sitting with my feet in a bowl of hot salty water – they really hurt. I do not think that I could have walked for a third day! I have launched the book at less than a pound (or dollar or euro) and now am waiting anxiously for any sales.

I did enjoy the walk across the Cotswolds despite my hurting feet. Along the way we stopped to look in wonder at stunning views of rolling green, yellow and red fields, at the soft hills and the forests and woods. We saw a number of gracefully prancing deer; clear, swift moving streams and rivers; and delightful limestone villages. In the Wychwood forest we met a young lady crouching amongst the ferns having a fag: she was hiding from her even younger charges who were there to learn bushcraft. We camped secretly on the fringe of Charlbury and enjoyed a night of beer, food and merriment in two of its four pubs. In the Three Horseshoes we ate fish and chips watched by two King Charles spaniels lounging on the opposite settle and we entered the quiz. We came last, but strongly suspect that the other teams were cheating (smart phones were spotted). 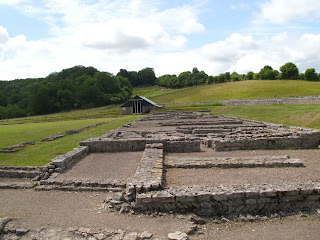 We examined the remains of a splendid Roman villa located in a lovely and isolated spot – that is until a train rushed by just a field away. And we managed the whole walk without the use of technology: in fact, technology seemed out of place in those delightfully remote footpaths.
Posted by Rob Walters at 19:13 4 comments: