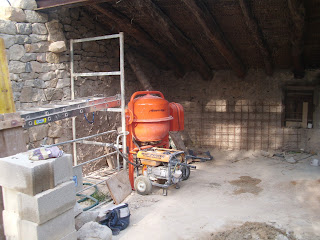 They told me that they would get me in the end, and they have. I have transported many things to Spain in order to progress my little project there. I am extending a small stone hut to make it into a liveable space so that we can tend our crops and enjoy living in our huerto, our garden in Spain. This year I reached a peak; I took a trailer over with a concrete mixer and a rotavator. When I left for England in March I secured the whole lot including my generator, ladder and scaffold to the wall with chains, bolted the door with a strong lock then left – nervously. 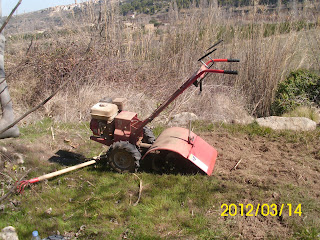 Why nervously? My hut is along a farm track which is much used in the day, but rarely at night. Nobody lives there. A determined thief has the leisure to do his dastardly work without fear of discovery. And yesterday he, she, or they struck. I had a call from Joy and John, an English couple who are building a house on the other side of the river, to say that the door had been ‘jemmied’ and everything of value taken. They even stole my trailer which was parked alongside with its wheel and ball joint locked. They must have lifted it into a lorry!.
How do I feel? Despoiled. If I could find the thieves, and I would dearly like to do so, they would say, “but you are rich, you have money. That is why you can afford to buy the things that we steal. We are poor, we need the money, we have no work, no future, we have to steal.” 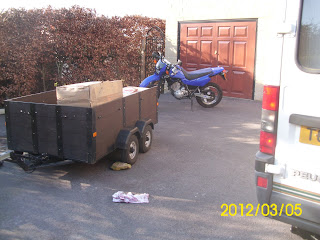 What can I say? I worked for the money which bought the things that were stolen. No one gave them to me. I did not steal them from a richer person. When I was young and just commencing a long life of house renovation and part time farming nearly all of my first implements, from a screwdriver to a spade, were bought second-hand. As life went on I managed to buy a plot of land, an old tractor and a plough. I did not steal the tractor and plough. I bought them at auctions and from farmers. I had a good job. I worked hard by day and sometimes all night. Perhaps I was just lucky.
I despise the people that have robbed me, but I do not hate them. I am not asking for sympathy here. I just want to vent some spleen. This theft could distract me from the building project, could distance me from Spain itself. But I think not. They must not be allowed to win – they’ve got my stuff but they cannot steal my will. The stolen things are, as people have reassured me, just things. Yet I was rather fond of them; we spent a lot of time together.
I will probably purchase new machinery, increase security, take everything home, become less trusting, more cynical, feel despoiled and less happy. Oh well, at least I drowned my depressed spirits in good old English ale last night after leading two tours. The income from the tours will help a little towards buying a new generator perhaps.
Posted by Rob Walters at 20:32 1 comment:

I grew up in the country until the age of twelve or so. In those days we marked off our year by countryside events and activities in addition to the usual markers of Christmas (presents), Easter (eggs) and Bonfire Night (bangers). In the spring we caught elvers and ate them. We threaded a load of worms into a ball, tied it to a string on a rod and lowered the tasty meal into the ditches and streams whose reaches were swept by the river Severn. The elvers would dig their little jaws into the worm ball and we would pull them out of the water and transfer them to a jar, then our Mum would fry them for breakfast. After this followed bird nesting, especially the hunt for moorhen’s eggs which we tested to determine whether a chick was developing inside, returning these to the nest and always leaving two or three eggs anyway so that the moorhen would lay again. The good eggs also made a tasty breakfast. 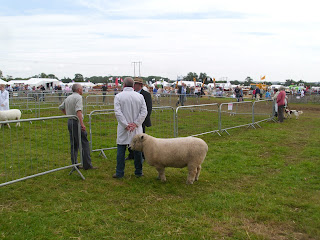 Later came scrumping where we helped the farmer dispose of excess apples and ran like the devil if he came to thank us. Then there was blackberrying where we could earn a ‘fortune’ by cycling off to the best bramble patches to pick (and eat) the ripe blackberries. Our hands became stained red with the juice of the berries and redder still with a thousand cuts from the vicious thorns. A little later came rose hipping where we picked the seeds of wild roses occasionally opening one and pushing the contents down someone’s shirt. Golly did they itch. Then there was eel fishing followed by flatfish and maybe the occasional trout or perch. And of course, not to be forgotten, conker time when we bashed hell out of each others horse chestnuts.
We used to help our Dad gather leaf mould from the woods for the garden and were pretty much involved in the gardening itself: digging, planting, harvesting. And of course, there was Harvest Festival when the musty smell of the church was replaced by the smell of fresh apples, pears and vegetables and flowers.
However, the peak of the year was the Berkeley Agricultural Show always held, I think, in August. When we were very young we were taken there by our parents and were dwarfed by the horses and cattle. Later, my main memory of the show was the dangerous business of getting in for free: leaping across streams, swinging across the river, straddling barbed wire. Also the regular thrill provided by escaped animals – usually a cow or a pig – and the chase. One year a confused and spirited heifer made it out of the gates and all the way into the village centre.

I was reminded of this as I wandered around the Moreton Show on Saturday. It was much the same as the Berkeley event, though I fancy there were less commercial tents and more pigs when I was a boy. Also I cannot remember the ‘Dancing Diggers’. Perhaps we did not have JCBs in those days. We certainly did not have the sanitary centres where you could wash hands and boots after leaving the animal compound with its many notices warning everyone not to touch the animals. We did touch the Cotswold Lion sheep though, couldn’t resist it and their owner encouraged us to do it. 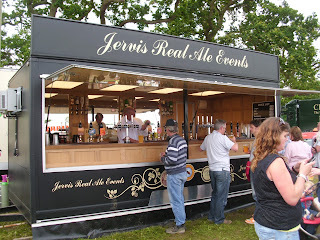 A pleasant addition to the show was the real ale bar that I discovered in one corner – though there was always a beer tent in the past and I guess that back then the only ale on sale was real. I mostly enjoyed the ‘Attractions’ ring – the other rings seemed to be for horsey events. It was in this ring that I saw the brilliant performance put on by two collie sheepdogs and their mistress. The collies were said to be having a weekend off from the sheep herding and in Moreton they were showing their skills at duck and goose control. It was both funny and impressive. For the finale the duckstress produced a troop of white Indian Runner Ducks which one of valiant dogs herded down a long thin tunnel made of white cloth. It was hilarious. So was the next event.
Star of the ‘Sheep Show’ was a loquacious New Zealander who really did manage to get his different breeds to dance: one made a good attempt at the Michael Jackson moonwalk! His constant chat was amusing for children yet often risqué for adults. After his naked sheep routine in which he expertly sheared the coat off a shaggy looking individual then popped her back into her cupboard (with the assurance that it was not an oven) I’m sure he offered the ladies of the audience a bikini shave for just 30 pence and actually offered to pay them. There were no takers.