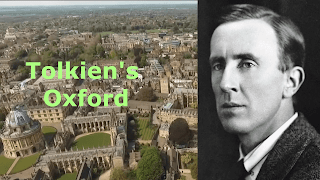 So here we go again, back into lockdown in England. I am fortunate, it doesn’t bother me that much. Ensconced in Stow on the Wold at the top of the Cotswold Hills I have plenty to do and plenty of space, so I left Oxford with some relief since the city was not its normal self. There were no lectures, no live music, and the pubs had for me lost the allure of social intercourse - the restrictions had turned them into restaurants.

On my last guiding day, the 31st of October, I led two tours knowing that they would be my last for some time, perhaps forever – who knows? The midday one was curtailed by the restrictions already in place. It was not possible to enter colleges or university buildings, but Oxford in its externalities has enough to satisfy the eye of a visitor and I have plenty of stories that hopefully help to bring the buildings to life. Visored and distanced, I felt hoarse by the end of that tour and took a spoonful of honey to ease my vocal chords into the evening tour: a ghost tour.

All fourteen ghost hunters were young, predominantly students and mostly female. Owing to the distancing I had little opportunity to talk to any of them individually, though right at the beginning a French student from St Edmund Hall asked me if she would be frightened by my stories. Unable to answer the question I explained that this depended more on her than me and left the question hanging. For me, the object in delivering the stories is to ensure that they are interesting, have enough detail to make them believable if you want to believe, and include that essential ingredient of strangeness. Besides, Oxford at night is a spiritual experience, of sorts. They applauded at the end, but what does that mean? Relief, herd response, pity, a chance to warm their hands? Wahtever, I do hope that they enjoyed the experience.

I walked home alone, resisting the gravitational attraction as I passed four pubs. They were busy and I knew that, even if I did find one that would admit me, I would not enjoy the experience unable to take up my usual stance at the bar. 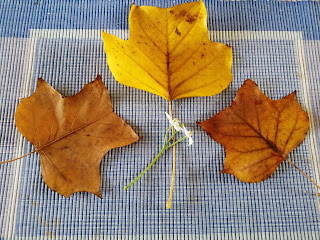 On my very last day in the city the weather was at first splendid, though chilly. I ran around the University Parks admiring the autumnal yellows and occasional reds. I even collected a few leaves from the ground. Do you know those leaves? Their shape is quite unique; they are from the tulip trees which form an arcade along the southern pathway of the Parks. There is also a flower in the picture but that is not a tulip and is not, of course from the tulip trees. Nice to find a flower at this time of the year though.

Later I took some photos for my next project: my lock down project. And, of course, it rained. Still at least the rain was not continuous and the sun broke through the clouds at times.  I enjoyed the journey in which I retraced the route C S Lewis would have taken on his regular walks from his home in East Oxford to Magdelan College. I then drove the made-in-Oxford red mini to the Cotswolds and started on the real priorities: the action list> A leaking central heating system, dripping bathroom, cheerless chickens, and so on. Keep well.