Good reasons to be a naked mole rat

If I were a bird, I think that I would like to be a great-crested grebe. Smart looking fellow and spends a good deal of time underwater as well as above it – which must be interesting. Recently, Margaret and I went on holiday from our base in Spain. I know what you are thinking, you’re thinking that we are on holiday whilst we are in Spain anyway, but that’s not true. There is work to do on the huerto and the house: crops to plant and weed, olive trees to trim and hoe, irrigation to sort out and things to mend about the house. Anyway, our holiday started in Daroka, Aragon a unique town nestling in a narrow valley the ridges of each side being capped with ancient walls interspersed with Mudejar towers and reminding me of the crests on the backs of certain lizards and Margaret of the Great Wall of China.

Next day we moved on to visit Gayocanta Laguna, an interior salt lake, in the hope of seeing water birds, maybe even a crested grebe. But, alas, the extensive salt lake was parched, it was in fact salt – so no water birds at all. We moved on spending the night in Utrillas, an old mining town, where we dined on yet another ‘menu del dia’: these are three course meals with bread wine and coffee for a fixed cost, in this case just sixteen Euros apiece. With beer before and wine during our subject range became extensive, even incorporating the vexed question of consciousness. Margaret argued strongly with me that consciousness could not simply be something that evolved by Darwinian survival, there must be something else - though she did not know what that might be.

For me that debate surfaced my usual question: do other animals have consciousness. I believe they do to some extent and that extent may well evolve with geological time. A dog, on whose face a disc has been painted will, it is claimed, try to remove it when passing a mirror. Cats train their owners to provide them with food in trade for rationed affection. Chimps like a good joke and grebes are very much aware that other grebes may steal their dinner. Naked mole rats meanwhile may have a group consciousness. These little chaps are certainly not smart looking fellows, but you might want to be one. Take longevity for example other animals of their size rarely survive for a year or so whereas the naked mole rat clocks up over thirty! Mole rats are rarely lonely: they live below ground in tribes of as many as two hundred in service to their queen; a bit like ants. It gets a bit crowded down there so the good old mole rat has developed a plant like ability to live without oxygen - for up to five hours! They are pretty much immune to pain and to cancer and have no worries about having their coats stolen to make into trousers or being asked difficult questions in referenda.

So there you have it: either a short life on and below the watery waves as a grebe or a long one in the warm - dark burrows of a naked mole rat nest. You have consciousness, make your choice.
Posted by Rob Walters at 10:00 No comments:

As I write this my feet are tapping uncontrollably to the beat of some thirty drums: three or four big bass ones, the rest much smaller snare drums : bombos and tambores in Spanish. And during the pauses as the drum leader picks out one amateur drummer or another for helpful instruction my village is alive with the sounds of chattering children, barking dogs and parking cars. Yes, my village of La Fresneda, so quiet for the past two weeks that you could hear the house martin chicks demanding their dinners from the nests below the eaves, so peaceful that arrival of the refuse collection lorry is an event, so deserted that it is a shock to see someone emerge from one of the upper houses - my village has been invaded! It is Semana Santa –the week of the saints – Easter. 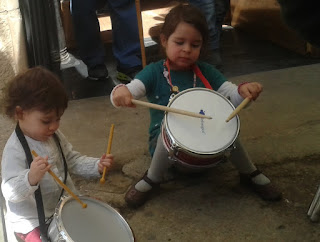 Tomorrow, at exactly midday on Good Friday, that drum troupe, swollen to one hundred or more will ‘break the hour’ with a thunderous and ecstatic roll, then continue to drum and parade for a few hours in the village square. Then after a deserved rest they will gather at the main church near my home and lead a procession through the narrow, winding streets to finish at the smaller church on the lower level of the village. There is no let up in the drumming. There are only two practice sessions, but in between these drumming can be heard from a house here, another there. Little boys and girls bang on tiny and tinny drums in the streets. Knots of people will form at street corners and shout joyfully at each other.  And all of this will also be taking place in most of the villages, towns and cities of our area – the major event being held at Calanda where film crews temporarily removed from the border with contested Gibraltar will capture the breaking of the hour by a thousand drums.

On Saturday our village will be invaded again as the streets fill with stalls for the annual antiques fair and on Sunday for its arts and crafts follow on. There will be nowhere left to park and the staff of the two bars will be driven to near exhaustion serving food and drink to the many visitors. Then the village will slowly empty, the drums will be stored away until next year, the blinds of the houses will be lowered and the families will leave their hereditary homes and head back to their real residences in Barcelona. The stray cats will emerge timidly from their homes in deserted houses, the martins and swallows will continue ridding the sky of insects and the long term residents will stroll along to the two village shops hoping that the shelves will not be entirely swept bare of goods. Then silence will descend on the sinuous streets of sleepy La Fresneda, broken only by the bells signalling the slowly passing hours from the church and town hall and the occasional passage of a tractor on its way to the surrounding olive groves and almond plantations.

Which do I like best? Well, the quiet periods need to be shattered at times, and the shattering should quickly return to peacefulness. This is the Spain I love: its vibrancy and variability, the way it has plucked the fun part out of the old religious festivals leaving the church going to the church goers, the inherent friendliness and inquisitiveness of its rural folk, the love of the city folk for their villages. Long live the difference between this and my home country, though not the difference over Gibraltar where the folks who live there clearly wish to remain British – in or out of the EU.
Posted by Rob Walters at 20:58 No comments: