Most years I would be heading for Spain just now for the autumnal visit, but wife support has changed that. So I am in England and the season has just started in Oxford with a talk arranged by Skeptics in the Pub on the theme of philosophers and science. Though I enjoyed the beer and a chat with a friend I was not impressed by the talk. A youngish self-styled called philosopher tried to convince a packed audience that scientists have no ethics and philosophers (whatever they are) have a monopoly on both ethics and logical thought. Fresh from The Edinburgh Fringe, I think he found Oxford sceptics extremely sceptical and a hard bunch as they repeatedly attacked his Venn diagram. This had a big circle labelled philosophy embracing a smaller one labelled science and everything outside the big circle was labelled stupid! The speaker probably scores quite high on entertainment value (with some) but low on rational content (with many).

The day before that I lost my wallet on the Chipping Norton to Oxford bus. The moment after I stepped off the thing I patted my back pocket – wallet gone. And with it all the usual stuff from credit cards to bus pass and drivers licence plus an irreplaceable poem on Turkey. The bus went on to the railway station and I intercepted it on its way back – wallet gone and a different driver. Sod it.

The day after I received some photos from Dolors, a good friend in our village in Spain. I could see from the thumbnails that the pictures were of my caseta - my stone hut at the huerto - and left the message for later. I opened it at around one o’clock this morning and could not quite believe what I saw – my two roofs, only completed last year, wrecked; my solar panel pocked and undoubtedly ruined! Sod it. 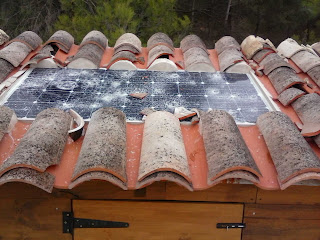 Many pictures of Spain feature the sun, the sea and the beach, and I guess that is the picture that jumps into most people’s heads when the country is mentioned. Our area is not like that. It does get hot in the summer, but it also gets cold in the winter. And though there is much more sunshine than in Britain we are rocked by storms. The Spanish word for storm is tormenta and sounds to me stronger, wilder, more tremendous and the storms around La Fresneda are certainly all of that: ripping lightening, deafening thunder, flash flooding and sometimes, just occasionally billiard ball hail. The latter is rare, usually localised, and bloody frightening. If you are caught in one you run for your life for shelter, the balls of ice usually start small, but rapidly grow in size and intensity. They damage cars, crops and of course, roofs. 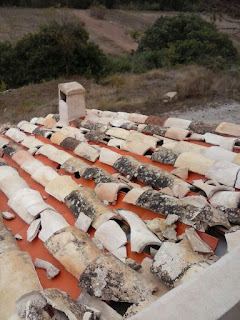 The hail storm that damaged my little creation over there broke on Monday. When I heard about it early this morning my reaction was subdued, sad more than angry. When all of my tools were stolen from the caseta a few years ago I was furious and vented my fury in a blog (7th September 2012) in which I poured anger and blame on the thieves. Who or what can I blame for the damage to my roof? Nature I suppose. Global warming perhaps – and thus all of the car drivers and coal consumers of the world – not really, I’m pretty sure that hailing predates the discovery of global warming.


So what’s next? Go over there sometime to reroof the caseta and install a new solar panel, I suppose. Sadly I carefully mortared the latter into the roof so that thieves could not take it! I wasn’t expecting an ice ball attack so soon.

PS a friend in Spain sent me a newsclip which contains a video showing the ferocity of the hail storm shot at the swimming pool of a nearby village. Reports now say that the hail stones were as large as eggs!
Posted by Rob Walters at 17:48 5 comments: