Covid and the Oldest Colleges of Oxford

Had my first covid jab on the last day of January. My wife had hers the day before and it made her quite ill which was a bit worrying (for both of us), but it was certainly not going to deter me. The whole thing was amazingly well organised with off-duty fire officers managing the car park. Other volunteers checked us in and handed out hand steriliser. The enthusiastic doctor then talked me and another chap through the process and grilled us on various topics to ensure that we were fit recipients. He was great, given that he’d probably done it all a hundred times before that day.

I hardly noticed the jab, felt like a little thump that’s all, and the whole thing took little more than five minutes. I was then told to sit in the car for another five minutes “just in case”. So there I sat in the red mini dwarfed by the urban tractors on each side of me. Still we’re all equal before covid.

As the evening wore on I became aware of stuff that had been slipped into my blood stream. I felt light-headed, then the opposite, and just generally odd. Meanwhile Margaret had pretty well recovered.

Next morning I felt a little dull but generally OK. The central heating system failed to come on so I fixed that. I fed the chickens, (they are in semi lockdown for fear of bird flu) collected the eggs, did my usual circuit of exercising: weights, wobble board, punch bag, darts and skipping. All seemed well so I set to work on the video I’m near to finishing.

But I was not right, I had a mild headache, pains in different parts of my body, felt so cold that I had to wear a heavy coat, and had this general sense of not being myself. And of course the work did not go well. Video editing is not an easy task and I made many silly mistakes.

By the third day I was fine and these minor side effects were clearly
dwarfed by the magnitude of the pandemic and the prospect of immunity for all. I am unaccountably proud that the Oxford Astra-Zeneca vaccine was so quickly designed, tested and manufactured in such vast quantities. And I am awed by the rate and scope of roll out in my country. I was nearly the ten millionth recipient I think.

Despite Covid, my work goes on. I have finished that video! It’s a quick streak through the ten oldest colleges of Oxford. It was fun to make but had its usual ups and down: problems with the editor, the presenter, the designer and the scriptwriter. Yeah, that’s me. Have a look, just click here, or on the thumbnail below. 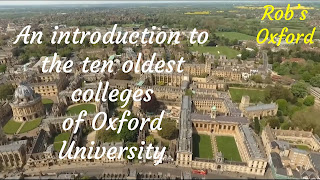