Does travel broaden the mind?

As a young boy I wondered if foreign countries really existed. Quite why I thought that someone had invented China or France I do not know. I can only suppose that the idea may have stemmed from attempts to convince me that a supernatural being existed, but could not be experienced.

I was not an early traveller, my school did not take groups abroad and if they had then I know my parents would not have been able to finance such a thing. In fact my first foreign visit was to Sweden when as teenagers my friend and I embarked on an unsuccessful quest for free love. However, through work, I did meet men who had been abroad - mostly as soldiers during WW2: men from my father’s generation. One of them was the most narrow minded bigot I ever met (I have mentioned him before – he’s the man who refuted the existence of negative numbers).

Just back from a long trip to the Indian sub-continent, I feel that if travel does broaden the mind then mine should be the breadth of Myanmar’s, mostly unused, twenty lane highways located in its new capital established by the military junta some time ago. Like most people I did not visit the place, leaving that to Boris Johnson on his recent visit to remind Aung San Suu Kyi of the plight of Rohingyas. I went instead to the old capital to visit the home in which Myanmar’s leader grew up and also the one in which she was for so long incarcerated by the junta. 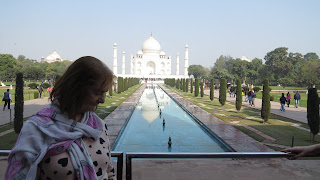 Yangon, formerly Rangoon was a little like taking a long refreshing shower after nearly three weeks travelling through India by train and bus – and that was a complete surprise. I left Kolkata, formerly Calcutta, expecting somewhere much worse – and I was gratefully wrong. I would say that my most harrowing experiences – of filth, poverty, neglect and overcrowding – occurred as we left Delhi by train, as we approached the incredibly beauty of the Taj Mahal through Agra, and finally in the city which many still call Banares (Varansi). It was in the latter that I could so nearly have experienced the worst possible end to my travelling life.  Arriving in darkness from Lucknow, we were informed by a series of tuk-tuk drivers that our hotel was not reachable. They would drop us as near as they could, then we would have to drag our luggage a kilometre or so through narrow, twisting and dangerous streets. Usually I ignore such tales because tuk-tuk drivers will tell lies in order to get a fare or even better to get you into a pal’s hotel – but this time the story was consistent. Added to which my phone would not work so I could not call the Hotel Alca (carefully selected because it served alcohol AND overlooked the River Ganges). 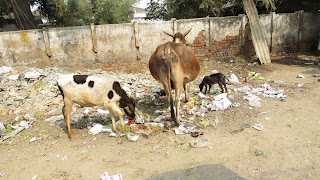 I chose the least villainous of the crowd vying to transport us to an alternative hotel and negotiated a price of 150 rupees (£1.50). It took about half an hour to get there: Banares is a very holy place for Hindus and therefore has a very high density of sacred cows roaming its busy narrow streets where these bovines are endangered by every conceivable means of speeding, roaring and beeping transport imaginable. I immediately rejected the first hotel judged solely on the state of the reception and the proprietor. The next place was much the same, and, as I left that sleazy hotel, I felt genuine despair – perhaps that’s why I crossed the street rather hurriedly, daring the mass of traffic to allow me passage.  And perhaps my rapid progress accounts for the fact that I did not see the slimy puddle of holy cow excrement in the middle of the road and slipped awkwardly on it, arms windmilling. Luckily, I regained my balance and was able to continue through the rush of vehicles; otherwise I would certainly have fallen beneath the madness of traffic and died there in a pool of dung on that grim street in Banares.


On the brighter side Banares is where the Hindus bring their dead to be cremated, a process that supposedly purifies the deceased once the hot ashes and bones are thrown into the sacred Ganges River. This process must take place within 24 hours of death so Margaret would not have had the cost and inconvenience of transporting me home and, since my corpse would have been already embalmed in holy cow dung, my transport to the next life would surely have been guaranteed.

Next day I ventured out of our rather expensive, but gratifyingly excellent, hotel to explore the ghats that line the Ganges. There, I found the main cremation area where they burn up to 250 bodies per day and watched the process with interest (all part of broadening the mind) and was particularly impressed with the occasional pop as an overcooked brain exploded. Pregnant women and children are not cremated in this way. Their corpses are weighted down with stones and thrown directly into the great river since they are already considered pure. Sometime these bodies pop up – which must be shocking for the young men who swim in that heavily polluted water course (and even drink from it).

There is so much more to say about this trip which touched on seven Asian countries, my notes alone approach forty thousand words – and the photos, don’t ask!! But one thing that will stay with me, particularly concerning India, is the poverty. One image that I have in my head and did not capture on camera, is of an emaciated, young mother with a child hanging onto her shoulder, one in her arms and two holding her hand. The birth rate is more than three times the death rate in India – and clearly much higher among the poor than the rising middle classes.

Did the trip broaden my mind? I think that knowledge must achieve that to some degree even though I cannot claim a deep understanding of the countries visited. But, if I could return to my young and cynically doubting self I could now truly say – they are there, those exotic, teeming, hot and sometimes beautiful countries: they really do exist.
Posted by Rob Walters at 11:01 No comments: