I now have seven eBooks up on Amazon's Kindle store and one has “sold” 230 copies in five days! I’m rich!
Not really. The novel that has done so well is ‘Lost Youth’. I wrote it a while ago as an exercise in grief dispersion following the death of our oldest daughter. However, as is generally my experience, the story and the characters took on a life of their own and any connection with Sheena’s life is solely in the title. 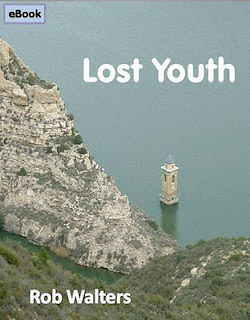 In ‘Lost Youth’ a young man called Mike enters university after a sheltered life with loving parents. The experience is debilitating and throws him into deep depression: he is friendless and neglected. The only relief in his dark life are dreams of a long dead sister and a strange friendship with a drug dealer who haunts the grounds of the university. It is this man who transforms Mike’s life by converting him into an anti-capitalist activist.
Mike leaves university and lives briefly with a revolutionary group in Germany. These are the most splendid days of Mike’s young life. Meanwhile his parents have discovered that he has abandoned his studies and so the father sets off on a search for their lost son, a search that has surprising, and then shocking, consequences for Mike’s family.
I could not get the book published and put it to one side. Now it is published: on Amazon in the kindle bookstore. Well, anyone can do that, but just how do I get anyone to read it? The answer is to give it away! That’s why I wrote “sold“ 230 copies above, I placed it on special offer for five days (i.e. free).
Of course there is a flaw here: two in fact. First, I don’t get any money for the work I put into writing and editing the book, and second my readers may not value the book since they got it for nothing. Ah but, now I am a writer in waiting. My hope is that some of my readers will like the book, will tell Kindle-owning friends about it, and will write astounding reviews about it. Then others will buy it for a mere £1.98 ($2.99) and like it and so move on to my other novel, “Shaken by China” which is up there waiting in the Kindle store. I should be so lucky.
That’s the plan and, as Mark Twain reminds me regularly, ‘the harder I work, the luckier I get’. So here’s hoping.
If you would like to read ‘Lost Youth’ I can still slip you one for free to view on your PC, reader or whatever. I can explain how to do it if you don’t already know – it’s not difficult. All I would like in return are a few comments, suggested corrections and/or reviews. Just click to email me.
Posted by Rob Walters at 16:46 No comments:

Wise travellers say that someone who spends a week or so in China quickly gains a good overview of the entire place and its people; those who spend a month there begin to have their doubts; and those who spend a year or more in this vast country realise that the place is quite beyond comprehension.
I spent just eight months there in two tranches and still have moments of complete understanding – very, very brief moments. Part of the puzzle is that the country is both old and new: an ancient society with a history that predates that of the West, yet a youthful society which traces its roots to the social revolution of Mao Zedong and the financial redirection of Deng Xiaoping - the latter blossoming into the establishment of the first McDonald’s in Beijing in 1991.
I feel a little involved in China’s history, just a little. Happenstance found me taking a post as a teacher in the remote city of Yan’an where Mao’s Long March ended and the revolution began. No one outside of China is likely to have heard of Yan’an, but, to the majority of Chinese, it is the equivalent of Mecca to the Muslims.
That visit left me with a big heap of notes, blogs and emails written whilst teaching and travelling. It also gave me the urge to write more and, after many false starts, it resulted in the novel Shaken by China which I have recently launched on Amazon’s Kindle and Smashwords as an eBook.
Though Shaken by China is a work of fiction it does rest heavily on my time spent in Yan’an. It is not by any means an attempt to encapsulate China – not at all. But it does, I hope, convey a tangential view of the Republic through the experiences of a young teacher. It allowed me to explore the culture a little: a culture that surprised me in its loyalty to family on the one hand; its degree of corruption on the other; and a culture which to the innocent traveller seems quite open yet is capable of cover-ups on a massive scale.
I am inclined to bring all of my notes together into a book entitled something like “101 reasons not to teach in China”, but I could also entitle it 101 reasons to do so. My recollections of those two periods are sharp and deep. The high point of the second visit was a brief return to Yan’an to marvel at the changes which had taken place in just four years. The low was the abysmal conditions in which the majority of people still live.
Highs and lows aside it all amounted to a great experience which I owe to Margaret, the real teacher of the pair of us.
Posted by Rob Walters at 12:20 No comments: