Being Famous: meeting a Hairy Biker

I’ve been really enjoying guiding recently. The long breaks in Spain (one of which I am beginning as I write) refresh me, though the first one on my return is scary – will I remember all the necessary stuff? When introducing myself to a tour group I usually tell them that I live in central North Oxford “where all the rich and famous people live”. Some smile, some pout. Then I tell them that I live in a very small flat and am not rich or famous.

On my last day in Oxford before this trip I did rub shoulders with a “famous”, well, actually, we touched toes – whilst sitting in the same punt! This was no accident. The scene was part of a new TV series centring on the Hairy Bikers and entitled something like ‘The pubs that made us’.

How I became involved is not important, and why I was placed in a punt rather than a pub is a mystery to me and will always remain so  - the latter being my more natural environment. My Hairy Biker was Dave and we met at the punt station below Magdelan (prounounced Maudlin) bridge. To my surprise, and despite his ostentation, I liked him. It was a surprise because I am an anti-personality person to the extent that I have a very long list of ‘personalities’ that I heartily dislike. And no, I am not going to list them, it is better to ignore them. 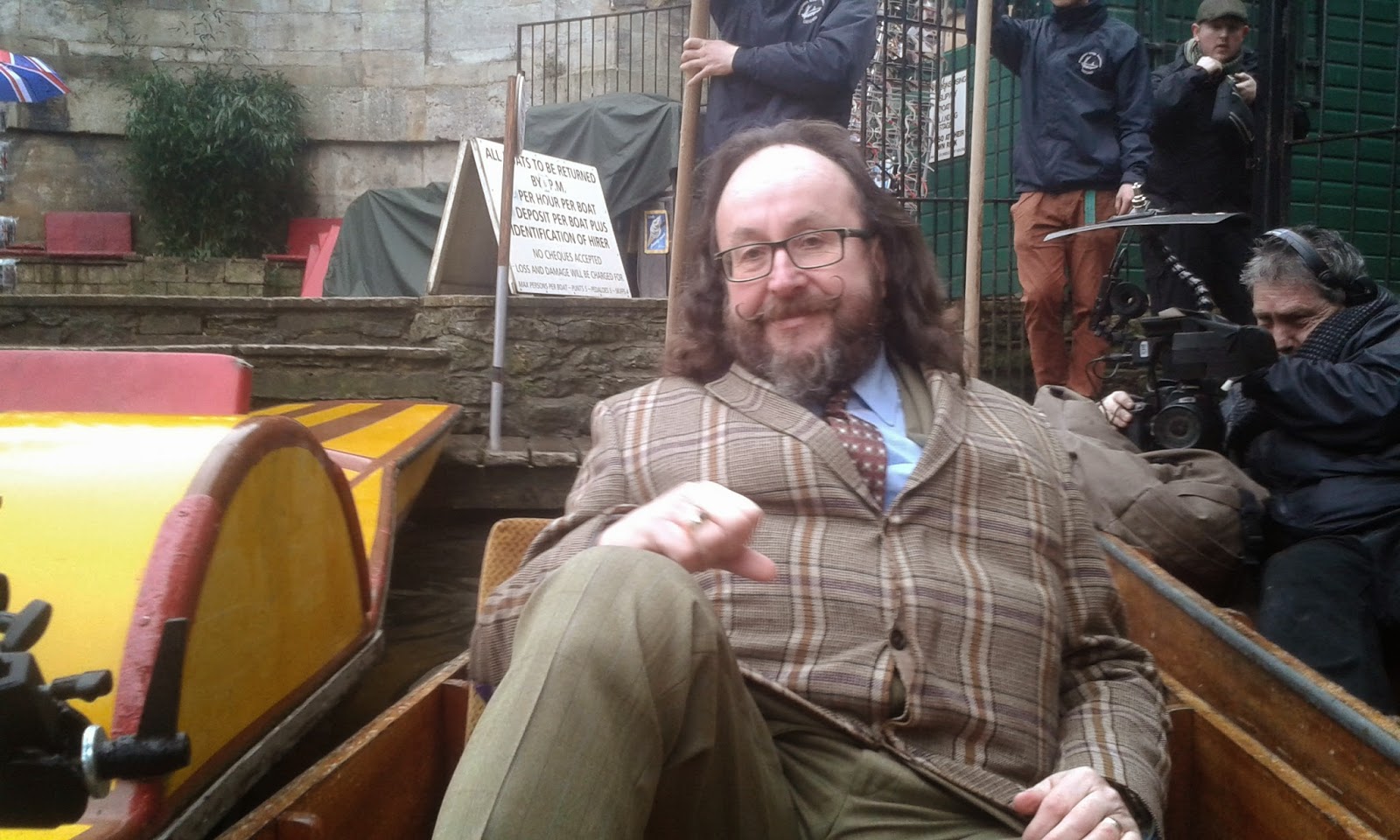 Dave comes across as a avuncular, homely, northerner with a Dali moustache and shapely beard. He wore a mid length brown, herringbone coat with purple pocket flaps and lapels. In a very short time I learned that he had five motorbikes and a Dutch Barge that he kept on the Thames. He also told me that he had recently purchased a chateau in France and was also part- owner of a new brewery in his home town of Barrow. Yet all of this did not strike me as boasting. He was not at all like the “I’m richer than thou” character of the Fast Show who once said, “Sophisticated? Me? I’ve BEEN to Leeds!” No, Dave just seemed pleased with his new toys and somewhat surprised to find himself so lucky. Maybe talking about them was his way of sharing them.

Having met, we had to wait around whilst Graham, the producer, director, cameraman, gaffer, and all else screwed his equipment onto one of the punts whilst ours was prepared by the professional punters. Then we had to meet again – for the camera. So much has to be done for the camera in this artificial world of TV. So Dave strode manfully down the slope towards me, then slipped dramatically and authentically as he stepped onto the jetty beside the river, almost falling in. This was very funny, everyone laughed and he joined in wholeheartedly. As a consequence we had to meet again, and again, and again, until our meeting seemed natural enough  – for the camera.

The filming caught by Graham as we were punted along the Cherwell was deemed to have gone very well by the producer and the director and the cameraman (Graham), but I am not looking forward to seeing it. Dave, in parting, said, “See you on TV”. But I know that might never happen.  Both of my last two interviews have ended on the cutting room floor. Given my previous experience, this time I insisted on being paid for my services at my usual guiding rate. That way I hope to win either way since I got to meet someone famous!!

Some of you may not know of the famous Hairy Bikers and I must confess that I’ve not seen any of their programmes. Suffice to say that they are hairy, they travel around on motor bikes to interesting locations, and they cook stuff. So, why are the Hairy Bikers the bedrock of this programme on the pubs of Britain? Because they are experts on pubs? No. Because they know lots about Britain? No. Because they are aficionados of the world of beer. No, not one of the above. It’s because they are well-known and loved by thousands. They are the personalities that attract the viewers to a series of programmes which presumably would not reach the screen on its own merits. We live in a strange world where the presenter is more important than what is presented. Perhaps it’s just another symptom of the Churchillian description of the importance of a parliamentary speech: first it’s who says it, second it’s how they say it, third, and last, it’s the content.

So, Dave and the other Hairy Biker, Sy, are perhaps the right choice for this series. Dave certainly has transmittable warmth and the actor’s ability to do a ‘take’ over and over and get better each time, rather than (like me) getting worse with each repeat. I liked him and can only suppose that thousands more do so. He is certainly not on my list of hated personalities. In fact, I would have enjoyed a pint with him afterwards. Instead, I cycled home in the rain and he returned his hotel - Oxford’s most salubrious.
Posted by Rob Walters at 20:10 No comments: