Our huerto in Spain (garden/orchard thing) is one of many that line the Mataranya River. They are all long and thin. At the river end there is quite a large level area which in our case is planted with young olive trees, above that there are three terraces which we have managed to tame over the years and are mostly cultivated, then comes the track which is parallel to the river and serves all of the huertos and alongside that track is our little casita which I have spent five years extending. Beyond this, the ground rises rapidly and is mostly pine-forested rocky outcrops.

I was quite amazed to find that I owned a strip this lovely wild area right up to the top of the Mataranya valley. Of course, I was keen to explore it all, but for some reason I made a vow to myself that I would not climb to the peak until I had completed the work on the casita – and I stuck to that promise.

On Saturday 9th May 2015, we held our opening party: a big and important event for both of us. The Spanish call it an ‘inauguration’ which sounds a bit formal. In fact, it was great fun. Though I did most of the work on the place alone (“solo”, the Spanish say), Margaret joined me in the rush to finish during the week before the party, spending many hours grouting the floor and wall tiles that I had laid. We also sent out the invitations together and tried valiantly to ascertain how many might come, how much meat to order for the barbecue, how much bread, how many rice salads to prepare and so on. 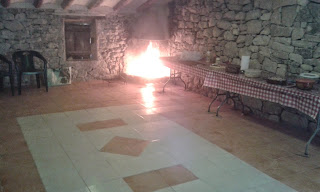 And everything was all right on the day, though with a wood fire, charcoal barbeque and gas barbeque all sizzling away our lovely casita became hot and choked with smoke. I greeted the guests with streaming eyes and a hoarse cough. Lots of people brought wonderful gifts which I really did not expect: my favourite was an old and worn hand millstone that I placed with pride in the middle of the floor of the casita and then tripped over it twice. I made a speech in stumbling Spanish, Dolores recited a Lorca poem from the steps in passionate Spanish and we did the Hokey-Cokey in Spanglish.

In honesty I have not quite finished the job: I have to renovate the little lean-to at one end of the casita and sort out some drainage and water supply issues (at present I pump up water to supply the casita from the irrigation channel below, in future it will use rain water). However, all the big stuff is done and we can live in the place once we have some furniture. Hence, the day after the inauguration party, I, accompanied by a well-deserved hang over, set off for that much-delayed climb to the peak of the valley so far above us.

The ascent was hot and hard, and I suppose is best described as scrambling rather than rock climbing. As I rose, I passed through our pungent pine forest with many of the trees at odd angles due to the slope, some were actually horizontal as if they too had attended the opening party the night before. 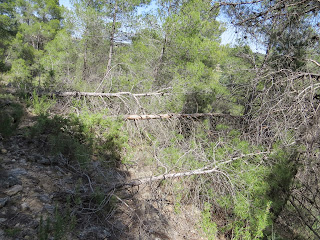 I reached the peak at last, fully expecting to see more pines, more wilderness. Instead, I was shocked to see ploughed and terraced fields growing almond and olive trees. It was like discovering the lost world, but in reverse. I even found an old iron bed up there, accompanied by a rusting, white-enamel chamber pot and water jug.

The view down into the Mataranya valley and beyond was stunning and I was overjoyed at just how difficult it was to spot my much-extended casita. It blends in perfectly, which is in stark contrast to other buildings that have sprung up along the valley. I did so enjoy that ascent and my time at the peak. I had looked longingly at the ridge high above me so many times during the five years of lonely construction work then, at long last, I was looking down at my completed project. I emitted a triumphal whoop into the wind-ruffled silence and began my descent.


What next? Well, I have already started writing the book which will record my struggles, the amusing interactions with the locals, the inevitable confusions that arise when building in a foreign land, and the highpoints that occurred over the last five years. I hope to finish it this year. And there’s plenty more to at the huerto.
Posted by Rob Walters at 19:00 1 comment: 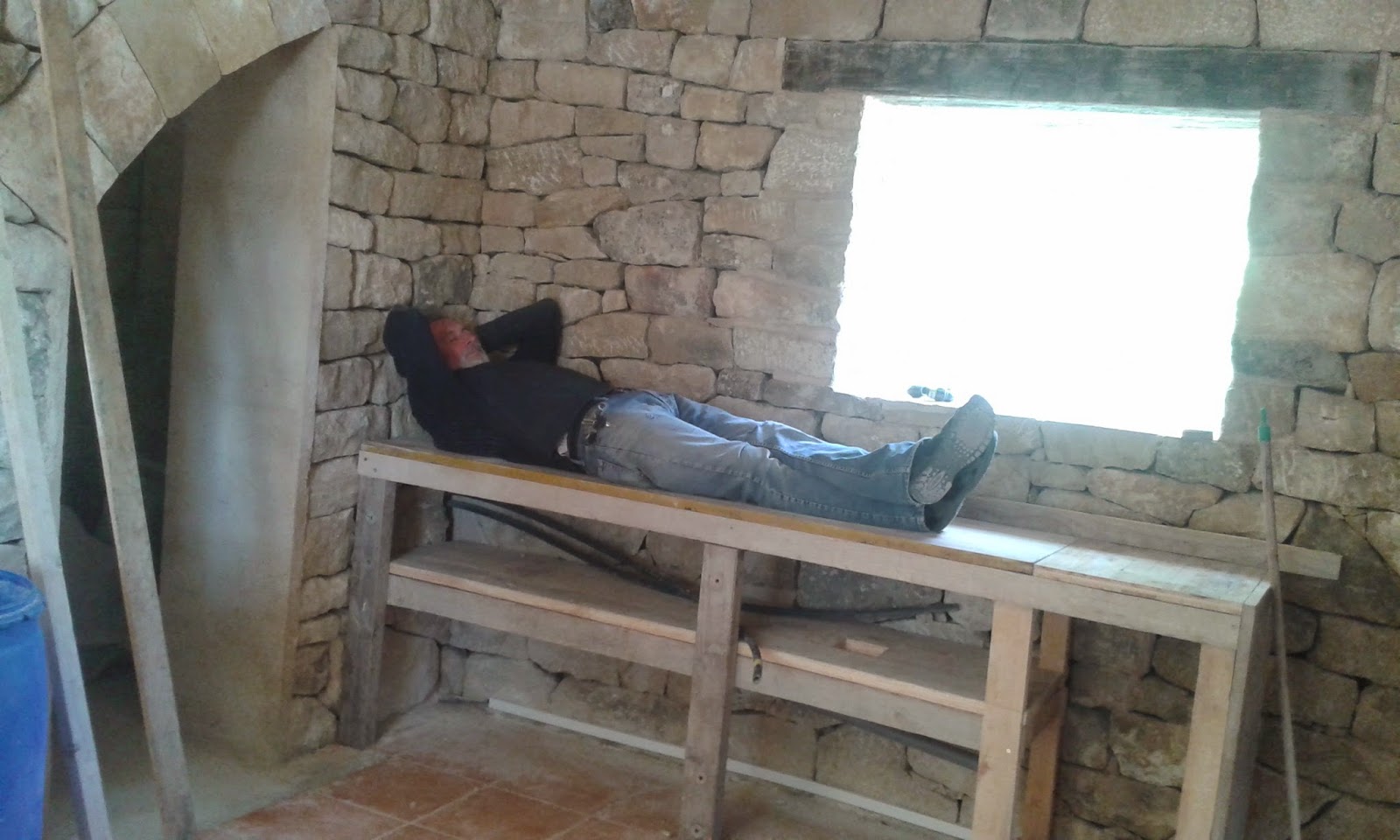 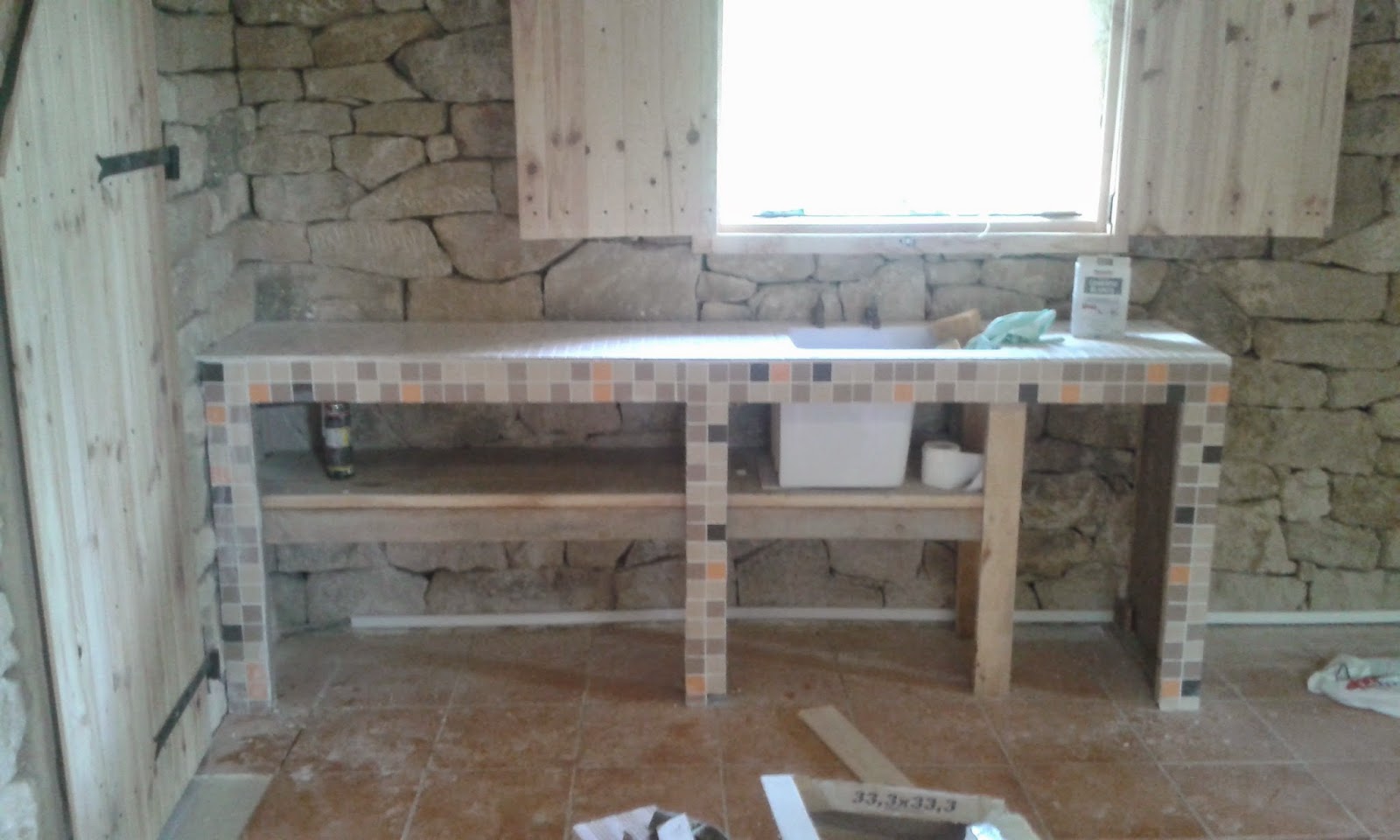 Anyway, the mayor (ex), the landlord of our favourite bar, the mechanic, the stone transporter, the blacksmith’s son, and fellow huerto owners and friends will, together with their families, hopefully be joining us for hamburgers, sausages and a rice salad at the “inauguration” at the end of the week. Oh, and I must not forget to buy beer and wine. Could I forget the essentials?
Posted by Rob Walters at 19:07 1 comment: