What is creativity? John Fowles believed that men wrote books in order to extend their lives beyond their lifetimes whereas women’s lives were extended by creating children. But women write and the likes of Jane Austen still live on through their books. Writing books is an acknowledged form of creativity, though I notice a great disappointment, even within the Writers in Oxford club, if it turns out that an author only writes non-fiction: the novel’s the thing, the true creation.

Writing books, painting, composing music, producing poetry, making movies, staining glass, potting, candle making: all of these are clearly creative. Carpentry, blacksmithing, sewing, science, gardening, cooking, photography, pornography: all of these are clearly not – or are they. There is a fine line somewhere here. A candle produced simply to give light is surely not creative, a candle wax creation of a pornographic scene may be.

Me, I roll stones. Some of the stones I use are so heavy that there is no possibility that I can lift them – so I roll them. My friendly adviser who occasionally pounces on my stoney creation, sorry building, saying “incorrecto” or “feo” (wrong or ugly), tells me that Spanish women used to roll the stones to the men who then did the tricky bit of fitting them into a wall. Sounds crazy, but it does take more strength to place a stone in a precise location than to roll it from one location to another.

My woman does not roll stones so I do both: the rolling and the fitting. Is it creative? I’m not sure. My wall is much admired, particularly since it mirrors an existing one and by that measure it is hardly creative. I know of its flaws so am not moved by the plaudits it receives. But the question still intrigues me: am I creating something?

Certainly there is something there now when before there was nothing. That’s true of any building work, yet the average builder is clearly not in the same league as a popular novelist and the builder’s creation is, perhaps, only the implementation of the architect’s conception. I am both architect and builder so I win, or lose, both ways. I have, through this experience, learned how difficult it is to plan a building in three-dimensional detail and how frustrating it is when the plans are just not practical.

When I am writing a novel I do turn my imagination free and follow its inventions, selectively. When I am searching for a particular stone I am thinking only of the hoped for dimensions and shape, though some imagination is needed - particularly how an odd shaped stone might be knocked into shape. When I roll a heavy stone down for an ‘audition’ in my wall my mind is entirely full of the sheer effort of moving and controlling it, a little like the single mindedness of a mountaineer, I believe. 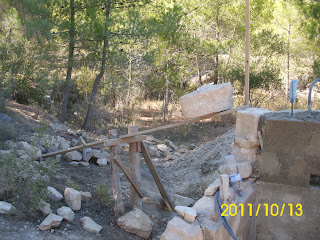 My summit is the arrival of the stone in the right place (often by rolling it up strong planks of wood or stepping it up temporary staircases made of blocks), shaping it, then finally standing back to make sure that it looks right. I then move on to the next. At times I stand looking at my creation (sorry building) planning what to now next and how and what materials I will need. When my mind is not engaged with stone then I sometimes sing. ‘Right said Fred’ fits the bill, but for some reason ‘Winter Wonderland’ and that awful unicorn song take over. Fortunately a song by my friend, Pete Madams is also getting a look in, the chorus goes like this, ‘I’m the man, the man of the moment.’

In Spain one of the words for girl is chica and my Spanish son-in-law (sort of) often called our daughter “the chick of his life”, though sadly that turned out not to be. If he had married her he would have called her my woman (mi mujer) which is normal usage here and not at all offensive to the wives, as far as I can tell.

Most of the women in our tiny village are somebody’s woman and most are not spring chickens. They do have a lot of go though, and keep the heart of the community beating whilst beating up their men if they are not home for dinner at nine: you ought to see the bar empty as the dinner hour nears.

On Sunday last we returned to La Fresneda after a weekend of wine, wandering and song in another village and felt too lazy to go to our own local espectaculo (variety show). But we did, and it was good.

It started late, surprise, surprise. Still, that gave me a chance to talk to our sadly deposed mayor and tell him that I hoped that he would soon be back. He beamed, either because he did not understand my stuttering Spanish or because he was pleased.

The show started with a beautiful young Mexican woman playing the violin beautifully: a hard act to follow. Later an old man played the piano accordion badly, and thought that the laughter was a sign of encouragement to continue. Our best friend, Dolores, led a troupe who recited, sang and told jokes that I had no hope of understanding.

All of this was a mere starter for the main act. This was a play which involved at least ten of the local ladies and two or three men who may have been ladies dressed up. The scene was a beach somewhere and the plot was clearly conceived to allow our local ladies to display. I lost the plot quite early but Margaret (my woman) seemed to understand some of it. Anyway, the couple who started the sketch were joined in the second act by most of the women of the village outrageously dressed and dripping with jewellery and glamour. I barely recognised the friendly lady from the bread shop as she swaggered onto the stage dragging a dog (toy one) on a leash and twirling an umbrella. I certainly did not recognise the lady in the brown dress, a dress so tight that she could not sit down on one seat and had to be offered another. They gushed, simpered, and really enjoyed their own performance as did the audience, their men amongst them.

The plot involved a parrot, but was not the dead parrot sketch from Monty Python. I think it may have been based on that funny story where a couple are distraught when their dog turns up with the neighbour’s pet rabbit in its mouth – dirty and dead. They clean it up and surreptitiously return it to its hutch. Next day their neighbours tell them of their weird experience: their rabbit had died and they had buried the poor thing in the garden. A few days later the thing had appeared in its hutch still dead, but very clean.

The ladies arranged the show in order to raise money for a Spanish charity operating in Africa. We saw a long video on the treatment of aids, tuberculosis and leprosy in that country and I felt that my five-euro entrance fee might help, a bit. I hope it does.