We travelled from our home in Aragon and back to England via a circuitous route crossing the border into Portugal then north into Galicia. The wedding was celebrated in the town of Ordes near Santiago de Compostela and afterwards we went on to Santander for the ferry. It rained.

On the wedding day the bride’s older sister picked us up at noon, as promised, and then collected another guest, Isabel, from a local hotel. Both women spoke some English, the latter much better than our Spanish. We drove to a place near Ordes and the sister showed us into the garage. This was the home of the bride’s Mum and Dad and we were there for aperitifs: the drinking had started. A large table was laid with plenty of nibbles and all sorts of drinks and was surrounded by a varied crowd of people dressed to the nines. Most impressive was the bride’s younger sister in a stunning green dress and her cousin in an even more stunning cerise number which was both long and body clinging. The bride’s mother wore mauve and was welcoming, but her father was rather reserved – probably he had no idea what to say to ‘los Ingles’. However, we quickly made friends with Isabel, whom we had met in the car, and Sindo, a lively man who had spent nearly twenty years living near London as a builder. I had a beer with him and found him very amusing. He told me that his wife did not like England. Her English was not good and she had been frightened to answer the phone. He had now returned to his native Galicia and told me that English weddings were boring and Galician weddings much more fun. I smiled and decided to wait and see. Patricia, the bride, appeared: she looked pale but lovely in a close fitting, white wedding dress.

We were driven back to Ordes by Patricia’s brother. The church was just around the corner from the bride and groom’s flat: we had noticed its lamp lit, modern, stained glass through the raindrops on the previous night.

We watched Patricia arriving in her car then entered the church. Jacobo, the groom, was already at the front dressed in a smart tailcoat. He had shaved off his short beard from the day before and looked very dashing. He is a tall man with a good mop of curly hair. He waved and seemed reasonably relaxed. There was some delay before Patricia entered the church on the arm of her father. Heart-stirring violin music accompanied their progress: music which I knew well and loved but could not readily identify. That walk must be a long one for any bride.

The priest was an elderly man with a pleasant voice. Dressed in white and gold he seated the wedding pair on a bench facing the altar with a parent-in-law on either side. The service was long and opaque. It was mercifully interrupted by more beautiful music from two musicians who were hidden from my view during the ceremony itself (I thought at first that the music was a very high quality recording) and by confident readings by the girls in the beautiful dresses. Most of the priest’s words were in Galician, I think. My mind wandered a little because I did not understand the content, but I admired the priest’s tendency to hold his hand far apart and look towards the heavens as if telling god about a very large fish that he had caught.

I examined the church. It was Romanic, fairly plain and, I guessed, fairly modern. Nice enough though and set off by a glorious golden rererdos which centred on a neat gold plated door set into a pillar. This was the place where the priest kept his wine. He removed it with great ceremony for the mass that terminated the service. At one stage there was a complex exchange of rings which we could not see. However, it was all recorded; the two female photographers seem to push their camera lenses right into to the hands of the betrothed. Then we were all shaking hands as one does in Roman Catholic services for some reason – a nice touch – and then outside for the rice throwing, which seemed quite painful for the recipients and fun for the kids. It began to rain, but the people of Galicia are unperturbed by a little rain, even on a wedding day.

The reception was held at a lovely location in the countryside. Some entrepreneur had erected a vast tent like building in the gardens of a fine old house. The roof of the building was canvas but the walls were mostly made of glass (except the toilets of course). A very large plastic pipe ran the length of the ‘tent’ and was, I conjectured, for the delivery of hot air on cold days. We did not need hot air, it was quite warm indoors. In the garden was a true Galician feature: a large ‘horreo’. These things are actually storage sheds for grain etc. and any self-respecting smallholding has one. They are thin and tall and can be quite ornate with at least one side shuttered to allow the entry of air. But the most remarkable feature of these structures is their base. Constructions vary but most consist of something like an inverted wine glass without the bowl and made of stone or concrete. Rats hate them since they are insurmountable and dry rot despairs of sending its destructive rhizomes down to the wet ground.

Next to the horreo (the biggest I have ever seen) was a lean-to which housed the smoking section. On the table were free cigars, cigarettes and matches. This luxury could have ended my twenty years of abstention, but I resisted. 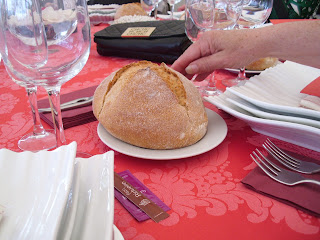 Regaled with more tasty aperitifs and with never ending glasses of sweet cava I quickly lost my appetite and became a little drunk. I was ready for dancing. But there was more consuming to be done. The one hundred and fifty or so guests were led to round tables where we all found a multi course menu and list of wines. We were proud to be seated at table two right next to the top table and I was placed next to the groom’s younger brother on a table which had plenty of English speakers on it. Beautifully laid out, there was a bread roll next to each place so large that it could easily be mistaken for a loaf.

Half a clawed lobster and one of it claws formed the first course and while I tackled the ticklish problem of extracting meat from these the waiters kept coming with more, and more, ignoring my cries of ‘suficiente’. Washed down with a sharper cava, this feast was quickly replaced by clams clamouring to be eaten and to be washed down by more cava and then replaced by a very decent plate of delicious sole – and more cava.
I survived the fish courses and though that was it. My stomach agreed, but viewed the mango sorbet with suspicion – rightfully. This was the precursor to the meat course! Full I truly was, but the meat was so tasty that I ate it and the vegetables and sampled the well-rounded red wine. Fortunately the sweet course was light and that (sigh of relief) was it. A truly sumptuous and memorable feast for one hundred and fifty people. 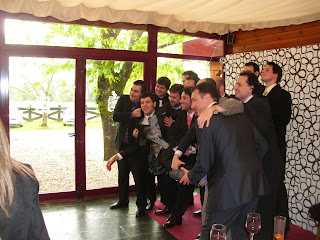 There were no speeches which was just as well since we would not have understood them, but every now and then a shout would go up, usually originated by a lively table of naughty ‘boys’ towards the back ( Jacobo’s high school friends I think) and then taken up by many others. I did not understand the words, but the meaning was clear: it was a call for the bride and groom to kiss. They pretended to resist, then succumbed to great applause. Then there were demands for the mothers and fathers-in-law to kiss. Then a general toast to the grandparents, to which everyone drank. Then whole tables rose to clink glasses and toast anything or anyone that came into their heads.

At some prearranged signal the bride and groom vanished and the music began – a ballroom piece of some sort then, through the doors that led to toilets, the bride and groom swept in dancing wonderfully in their perfect clothing. And, to my amazement, Jacobo suddenly swept his new wife from her feet and swirled her around. I thought this a dangerous move after all that food and drink, but all was well and the music was drowned in applause and cheering. The pair were joined on the floor by their parents-in-law and the next phase of the party had begun: drinking and dancing.

I tried, but I have to admit that I could not do it. Weighed down by so much food and wine my thin frame could only manage two dances (wimp) though I think that Margaret was game for more. We walked around the gardens and watched the rapidly more ecstatic dancing, mostly performed in groups and mostly centring on the naughty boys. The peak of that part of the evening was reached when the DJ played a popular nationalistic Galician song, something equivalent to Rule Britannia I think. It transformed the dancers into singers. 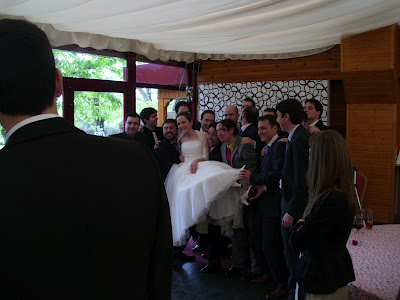 We retired from the floor spending some time talking to friends of the bride and groom who also came from Oxford. After that we could easily have slipped away into a deep sleep, but then I had an idea. Two rum-and-cokes later we were on the floor dancing with the best of them, two more and I had to order a coke without the rum for Margaret – she was becoming an unreliable dancing partner and needed a great deal of physical support. Meanwhile the naughty boys were getting naughtier, they were throwing themselves and the bride and groom into the air. The most dynamic, Pablo who worked in Italy, had removed his coat, tie and shirt and seemed to be wrestling rather than dancing. I danced with Sindo at one stage, ageing men aping the naughty boys.

During the night we found that we had a link with quite a few people at the wedding: people who we thought were complete strangers. Four years previously we had loaned our house in Oxford to Jacobo and Patricia whilst we were in Asia. Every now and then someone would approach us (including Pablo the wrestler), ask if we were Rob and Margaret and then tell us that they too had stayed in our house for a while. Many of them admired the downstairs toilet where I had installed a pub hand-pump to operate the toilet flush. All of them were disappointed that we had sold the place.

Jacobo and Patricia were perfect hosts, sometimes dancing energetically with the best of them, sometimes in the conga-like chains of dancers, sometimes asking us and other guests if we were OK – we always were. We enjoyed the whole day enormously but were glad when Jacobo found us a lift back to our camping van with a couple who were leaving early (at about 3 a.m.) I said goodbye to Sindo and admitted that Galician weddings were truly better than English ones.