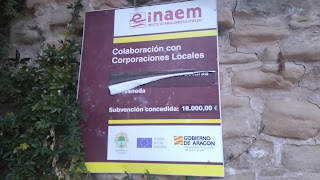 In fairness though, the EU has been kind to Spain. Above is a photograph I have taken of the ‘much needed’ horse trough beneath our village home there. Note also the sign recognising the EU’s valued contribution - and the lack of horses.
Posted by Rob Walters at 14:02 No comments:

Forget Glastonbury, we had our own festival

I love live music, beer and the open air, so, with that background in mind there was bound to be a moment when I might think, “I want to run a festival”. That thought occurred this year because three things came together: we had recently purchased our own field, it was my 70th birthday and it was our 50th wedding anniversary. So I mentioned the festival to Margaret, my long term wife, and she froze! But, after some discussion, her initial fears faded and she became as enthusiastic as I was, if not more.

And so, after months of planning, IvyFest came about on June 3rd 2017, my birthday. As the great day got closer, I began to think about who we should invite and I froze – there were too few to make it a festival. Then I sat down with Margaret and  the potential list began to rise, peaking at nearly one hundred. We trimmed it down and sent out early invitations, some key people were away on the day, others couldn’t come for other reasons, so we sent out more invites, the numbers went up and began to exceed seventy, our optimum number. Later we had some cancellations: illness, second thoughts, people with better offers – so the numbers went down. Finally we ended up with a list of sixty-nine, which seemed fine. 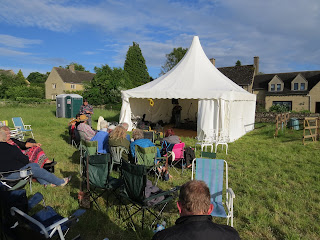 Then, at last, the marquee arrived and the toilets, I collected the beer and the bread and Margaret got the food together and the guests began to drive into our field - one friend I had not seen for the last fifty years!

The main theme was live music so I had recruited a wonderful double band from Oxford: The Mighty Redox and the Pete Fryer band with their unique combination of original and rocking-cover songs. Good friends and great musicians, they filled the evening spot. In the afternoon we had solos from the honey-voiced Pete Madams singing Leonard Cohen, Willy Nelson and many of his own songs, plus Ken Woodward singing country and western in a shirt that he probably bought in Nashville. The afternoon group, No Horses, played earthy electric blues with spirited harmonica accompaniment. And people danced – yes they danced. 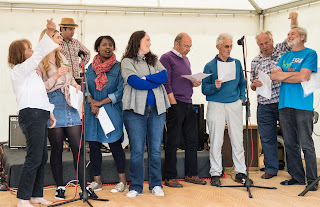 In the midst of all this professional music the scratch male and female voice choirs vied for singers of the festival. Pete, the judge, selected Rob’s Old Boys for the award – based, I think, on entertainment value rather melodic content.

There was a Spanish influence abroad. IvyFest started with a boom from a rocket ignited by Carlos, the Spaniard. Everyone cooked their own food (including a chorizo) on wood fires and many bottles of Spanish wine were consumed along with the barrels of local real ale.

Quite a few people camped on the field and I was the last to leave the dying embers of the fires - or so I thought. I checked around, locked up and went to bed, tired, replete and happy. Next morning, after a visit to the toilet at about seven, I pulled back the curtain and peered onto the field and spotted my granddaughter, Hope, lurking near the marquee. Later I found that I had locked her out and she had “spent the worst night of her life” in the field! Poor girl.

That aside, it was a great day. Some guests were so pleased with IvyFest that they suggested we make it an annual event. Nice thought, but therein lies bankruptcy. IvyFest was definitely a unique one off.

Mind you, a ticket to Glastonbury would set you back nearly £250! Makes you think doesn’t it?