Three weeks is not a long time to spend in this huge country and it’s true that we only nibbled at it, but then what a satisfying nibble. 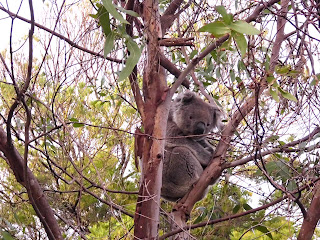 High points for me were the mammals, the birds and the coast. I really did not expect to see a koala bear in the wild, but I did. At first I thought I had spotted a swelling in the fork of small tree. I left the track and getting closer saw that it was a furry grey ball. Standing beneath the tree we watched limbs slowly disentangle from the ball and a face appear. The koala looked down at us blearily and we looked back at it smilingly. A lovely encounter.

Kangaroos we met earlier with wallabies too. And later, in a special reserve in Bunbury the tame ones 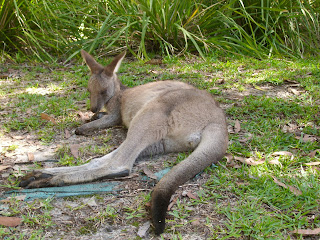 nuzzled our hands hoping for food. 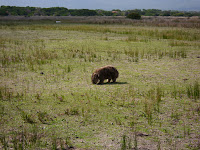 I doubt that the wombats could ever be tamed. The ones I met reminded me of a hairy log with short strong legs. One passed within a foot of my foot, just rooting about and minding its own business. Like kangaroos they are marsupials, but their pouch is reversed so that it does not fill  with earth as they dig.


I did not dream that I would ever see a wild echidna; they are a little like a hedgehog with a long snout for rooting out insects. They are not marsupials: in fact they lay eggs! Such wonders. One night I met a possum, a creature hated in New Zealand as a destructive colonist. In the day along a little path leading to the famous limestone cliffs and islands near the Great Ocean Road we made the acquaintance of a bandicoot.

And the birds! They are so wonderful, so different. From the ibis that strolls around the streets of Sydney to the noisy and colourful parrots and lorakeets. Then there are the white and pink and black cockatoos who argue constantly. Everywhere there are Australian magpies which look like white and black crows and have a lovely, tuneful song, and we also spotted the splendid fairy wren, the male of which is an iridescent blue. Of course, we also saw the famous kookaburra often sitting on a telegraph pole. Margaret sang her song (learned as a brownie) to one of them, but it did not laugh. Oh, and not to forget the pelicans, and emus, and on and on.

I paddled in the sea with sting rays measuring at least a metre in width. They were flapping around taking food from the hands of children. On the same beach we watched the biggest catch of salmon that I will ever see in my life. And the waves, such mountainous waves that attracted the brave or foolish surfers bobbing about waiting for a big one on which to practice their admirable skills.

Whilst travelling I read the book The Fatal Shore, recommended by Fergus our son (he was the reason that we traveled to this great continent). It is an excellent account of the conditions in Britain that gave rise to transportation and the whole history of the use of the aborigines’ continent as a dumping ground for our felons. What a story, and what a country.

We did not meet any aborigines (it seems from the stats that many of them are in prison) but we did meet plenty of resident Australians: helpful, straightforward, friendly, and unpretentious people on the whole. Many own large 4by4 trucks and they live hard and play hard. Yet surprisingly, we found that there were many petty restrictions, but these were leavened for the locals by the freedom to surf in the lunchtime and generally take advantage of the wonderful country life.

Pubs, the best ones, were enormous: they often have a large public and lounge bar, a games bar for pool and darts, a bistro, and a pokey room for gambling. The beer is cold and fizzy on the whole. One place actually advertised “tooth crackingly cold beer”! In one remote place I met a man who had visited Manchester and complained to me of the flat, warm beer he had to drink there. “Lies heavy on the stomach,” he said, “no fizz to lighten it up.” There is no accounting for taste or for the willingness to buy expensive keg beer at more than £10 a pint in some places.
Posted by Rob Walters at 21:16 No comments:

New Zealand was the last country to be colonised by man. It now has a population of nearly 50 million – most of which are sheep. It is famous for the invention of bungee jumping, jet boating and highway drifting – all semi-dangerous activities. Meanwhile it has no snakes and by far the most dangerous animal there is man. 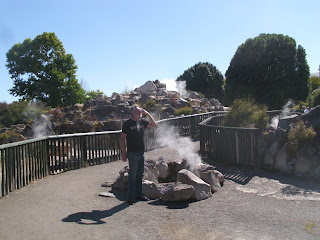 We drifted from Auckland to Christchurch over a period of nearly three weeks, mostly in a motor caravan. I saw bubbling mud and smelt it (very bad eggs). I saw geothermal sawmills and an active volcano spewing smoke into the sky above Lake Taupo and burned my feet in the hot sands surrounding that cold lake. I discovered that the Maoris are mostly physically integrated, by interbreeding, with the second wave of colonials from Europe (and that they are big people). I actually hunted down a kiwi bird. In fact, I think I saw two of them in the artificial gloom of a special enclosure, but I’m not sure – it was pretty dark and they’re shyly nocturnal. I did see and befriended a couple of fantails – my favourite bird in NZ - one of them nearly perched on my shoulder. I also admired the tui with its smart silver ruff and so-white bow tie. I did not enjoy the beer from the brewers who have stolen the tui’s name – but let’s not get on to NZ beer.  But, let’s not forget the silver eye bird or the blue swamp hen. I shall miss them.

I was encouraged to hate the possums. They destroy the environment for other creatures and steal birds’ eggs. Enjoined to squish them if I spotted one on the highway, I neither spotted nor squished. They are sweet looking creatures and NZ is the only country where you can legally hunt them.

I love trees and New Zealand has plenty. I became familiar with lancewood, whiteywood, the different beeches and the enormous totara. Also the strange cabbage and fern trees and the two species of tea trees.
I visited my first glacier and sailed through my first fjord – you can do so much in this little country. I paddled my feet in the Pacific and the Tasman, drank rum and coke, coughed a lot and itched unmercifully because of my attractiveness (to sandflies).

I was both hot and cold, wet and dry, and I got nicely brown on the exposed bits. I drove nearly three thousand kilometres, but it seems like much more: roads in NZ are narrow, mostly twisty and steep, and dual carriageways are solely for the cities. Along the way the patterning on many roads intrigued me. At first I thought that there had been many accidents, but no, those tyre marks were deliberate. Some zigzagged up the road, others showed that the driver had performed a full 360 turn whilst burning rubber. Our only hitchhiker, Raj, told me that drifting is a national pursuit for young drivers. It’s easy: you build up a lot of speed, pull on the handbrake and … drift. It’s also cheaper than bungee jumping and drier than jet boating.

I can now speak like a Kiwi (not the bird). How’s this for ‘ten hard men’: “Tin haad min.” Sadly, I think that the famed winky-wanky bird of a certain rugby song becomes the winky-winky bird, which sort of spoils the point. And ‘ten tin sheds’ becomes tin tin shids. What can I say?

Of the Kiwi people? Lovely: friendly, helpful, smiley, talkative, polite – one man volunteered the parking lot in the front of his paint spray business as a night stop for our motor caravan. How kind. 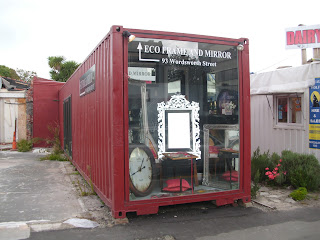 Our trip ended in Christchurch. It was a shock to be there. You can watch disaster clips on TV and get some appreciation of a major earthquake, but to see the destruction with you own eyes is quite, quite different. At first we thought that there were a massive amounts of rough surfaced car parks until we learned that these are the plots where crippled buildings have been razed and removed. Then we thought it amusing to see an antique shop operating from a container until we came to  astrange part of the city where all manner of shops and restaurants operate from garishly painted containers whilst the owners await new premises. Then we wandered unawares into the vicinity of the crippled cathedral where street after street is fenced off, the fences enclosing tottering buildings and propped up facades. We became trapped in this awful wilderness and, tired and hungry, came across a park where some worthies were distributing hot dogs to the homeless – we had one.

There are two hundred empty white seats near that park, itself near the TV centre which collapsed causing the greatest number of casualties. Each of those white seats are empty, they represent those that died in the Christchurch earthquake of 2011. They overlook a strange and massive wigwam affair made of steel and cardboard which is a temporary replacement for the cathedral. Life goes on; rebuilding has started.
Posted by Rob Walters at 13:38 No comments: