Yes, I’ve learned a new word. I hated it at first: my normal reaction to hearing a new word is revulsion and deep suspicion that somewhere in the OED there is already a perfectly good word with the same meaning. But then I realised that we are rewilders and this new word has swiftly been added to my vocabulary! 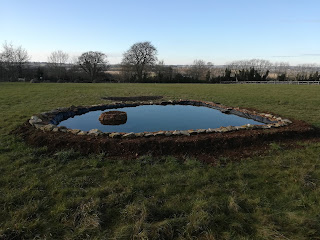 Since we managed to buy the field behind our
house in the Cotswolds we have planted many trees, hedge plants and wildflowers and I have created a pond. I had been feeling a little guilty about owning a few hectares and not farming it productively, but now I find that as a rewilder I am actually part of the growing army who claim to be saving the planet! Gosh. And there’s more: I am one of the few people who, during trips, collects their own urine, brings it home and pours it into the compost bin! I know you do not want to know the details of that so let’s just recall, and slightly rephrase, the words of the Yorkshireman from the Fast Show: “I’m considerably greener than you”.

In fairness we were green before the word was ambushed by conservationists.  We dutifully took our old newspapers and magazines to a place that recycled them, we grew a lot of our own food, why, at one time we kept goats, pigs, chickens and sheep on our smallholding where we planted hundreds of trees. We also composted, manured and ploughed the fields and scattered. Yet, somewhere along the line we have developed an antipathy towards the near religious zeal of many of the greenies and hearty dislike for the Green Party’s sole MP. How has this arisen?

For one thing, though always concerned by my own, often grudging, use of the air transport, I am constantly amazed at the vast number of activists who fly to conservation conferences. Also I began to sense that the core activists have agendas which are not centered on conservation. My personal belief is that the problems caused by technology will be solved by technology – not by zealots who are anti-technology, have strong beliefs in controlled economies, collectivism and the like and imagine a paradisal society of low population living close to nature yet with all the benefits of modern medicine. They reject the potential technologies of ocean cloud whitening, carbon capture or fusion, yet embrace a future where the planet is densely covered in ugly, destructive wind turbines and solar farms. What’s more they delight in a future imagined by a sixteen year old child of high intelligence but little experience or breadth of knowledge and are often vegans with a wish for us all to live amongst soya bean plantations without a cow, sheep or pig in sight.

Yes we are rewilders and in the pub I only drink real ale (no added CO2). But I’m sure we can do better. Less travel, less meat, scrap the diesel motor caravan and buy an electric version, etc, etc. Then again perhaps I can offset my warming sins with our rewilding activities on the field? Is that permitted?