A project completed and a splendid day in Oxford 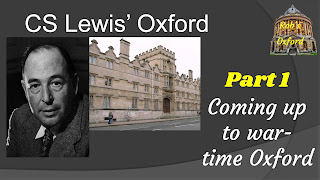 I have spent a great deal of time lately producing a video on CS Lewis’ Oxford, well in fact its a mini series of three covering his arrival at Oxford, his earlier years as a fellow and tutor and then his later years living at The Kiln. Here’s the link to part one.

I admired Lewis through his books long before I knew anything about him, and I admire him still and would have dearly loved to take a pint or two with him in the watering holes of Oxford.

Finishing a project like that is inevitably anticlimactic, but now the series is done I will return to a writing project that has been neglected for some time.

Meanwhile the entertainment scene in Oxford is good, though I think that the lockdown years have subtly and sometimes drastically changed the pub scene here (four of them are still closed, three belonging to colleges). Nevertheless I had a wonderful day following the launch of my CS Lewis series. A tour in the morning then an afternoon spent in Jericho sitting beside the canal appreciating live music from a tethered barge followed by pie and chips and a few pints in the nearby Victoria. All of that was capped by a wonderful open-mike evening of incredibly varied music at another local pub. If only you could cask a day like that, and tap it when needed.