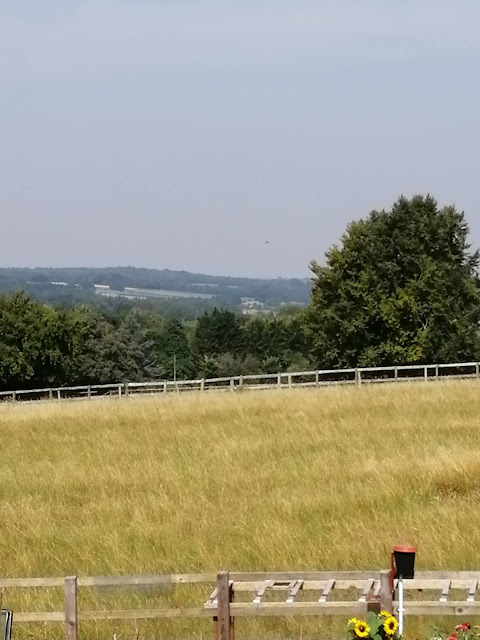 This is the view from my ‘library’ in Stow on the Wold, the room in which I often write when I wish to unplug (no Wi-Fi there). The panorama is dominated by the sky and looks NNW. The hills that you might just be able to see in the distance delineate the horizon: these are part of the Cotswold escarpment which drops steeply down into the Severn Valley. We are on the very edge of Stow, overlooking our own field and down towards the village of Longborough. It is a pleasant landscape, however the aspect that moves me most just now is not the land, but the sky.

The orientation of the house is such that when I sit in my usual armchair in the lounge I can, with the slightest movement of my head, glance from the TV screen to a broad section of the sky centered on the setting sun, and most evenings the latter is by far the most interesting. Those sunsets are so varied, so spectacular, so colourful, so expansive, so inspiring, so moving that I fear that I do not have the vocabulary to adequately describe them. Anyway, what would be the point of a word picture depicting a natural phenomenon that everyone experiences hopefully many times in their lives? I could take a photograph of an especially exceptional sunset of course, and I have, but the equipment I possess never quite captures my own experience, and I guess that everyone’s experience of sundown is subtly different anyway.

During the Covid lockdown I saw many spectacular sunsets and, perhaps as a result, this reawakened a dormant interest in what follows: the sky at night. I think that my reawakening was also stimulated by the Elon Musk’s Spacex rocket used to carry two men up to the International Space Station (ISS). Interesting to see that space travel is now a commercial, rather than government funded, venture and intriguing to see the ISS pass through the night sky with those two men aboard.

We knew roughly where to look from a website so we stood in our field watching the sky to the south on the night after the launch. Margaret spotted it first: it was very bright and moved through the heavens quickly, leaving no doubt about what it was. It was rather humbling to think that there were people up there. This event then seemed to lead naturally to spotting the planet Mercury which appeared just after dusk and quickly passed beneath the northern horizon. Though just a pinprick of light it was exciting to watch the Sun’s nearest planet move through the sky.

I found Mercury with the help of a mobile app and this progressed to the location of Jupiter and Saturn in the southern sky. I learned that Jupiter is at its brightest for us just now and, as the most massive of the planets, is - apart from the moon of course - one of the most luminous objects in the night sky. I have been watching it rise and fall for a couple of months now together with Saturn which seems to follow it across the southern hemisphere. Lately Mars has risen in the east and I have been able to see all three from the south facing window of this room. Together with sightings of Venus, the brightest of all, that completes the planets nearest to our Sun. The more distant ones, Uranus and Neptune, are harder to see, but I do hope to spot them soon.

As if to underline my admiration of the infinity that envelopes us, the mid-August night sky put on a special display recently. The evening was dry, hot and humid and there was little cloud cover, just a few large formations in the north-west. As darkness fell these began to glow intermittently with a soft inner light reminiscent of an incandescent tube flickering into life. This display of intra-cloud lightning endured for some hours, and to add to the eeriness of this sight there was a complete lack of sound - a sure indication that the storm was a considerable distance away and that we gardeners wouldn’t be getting any rain. I was disappointed that I did not see the expected meteor shower that night, but those luminous clouds were enough.

Then, on the very next day, we did have a thunder storm. We were walking to a pub in a nearby village  to do our bit for the Eat Out to Help Out scheme. It was warm and humid with barely a breeze as we strolled down a sun stroked lane towards Broadwell, then, very suddenly, a fierce wind ripped through the woodland at our side almost blinding us with air born debris. The sky darkened quickly and a few drops of rain fell. We still had a few miles to go towards our destination, but good beer and food beckoned so we pressed on. At one point we had to shelter in a copse as the rain belted down. When it lessened we had to cross a wide, recently harvested field feeling very exposed beneath the looming thunder clouds. Suddenly a brilliant streak of lightning forked down straight ahead of us as if creating a short-lived pointer to our destination, and this was immediately followed by a deafening crack of thunder so this time we were near the eye of the storm. I did get quite wet (Margaret had the umbrella), but it was well worth it: both to experience the angry sky and the welcoming inn.

I’m sure that most of you have seen many beautiful sunsets, witnessed impressive thunder storms, and also spotted the planets. But for all of that, I felt a strong need to share my wonder, awareness and enjoyment of the sky. It may be so terrifyingly grand as that it diminishes our individuality, but it can also expand our minds.