Imagine a powerful computer that is so small it fits into the palm of your hand, can listen to geostationary satellites way up in the sky and communicate with any other device like itself in the world; something that can be calculator, can recognise speech and turn it to text, is a word processor, a diary and a source of all sorts of applications including one for bird spotting. No need to imagine it though, because it is today’s smartphone – wonderful.

I recently walked from Wantage, near Oxford, to Lyme Regis on England’s south coast following the ridgeways which make up the country’s oldest travel routes.  I did it the wild way: no forward booking, no cloying timetable – simply a return date on which I was booked for a tour some nine days after my departure. Freedom: but at a cost. The cost was the weight on my back of the tent, sleeping bag, mattress thingy, clothes and footwear, water, food, books and maps. The desire to minimize that weight became almost paranoiac.

I would have needed four or more maps, why not use phone? I tried it out using something called OS maps and it was great, the phone knows where it is from GPS and the app projects that onto a map. It’s a bit small in coverage at times but otherwise probably better than a map. But I needed books, particularly my bird book. Here a friend recommended a bird spotting app and that was great too. I didn’t even need to take my Kindle because I could read my current novel on the phone. Great, everything great and light. But what about charging the phone? I bought a battery pack with a solar charger, a bit heavy yet only about the size of the phone itself – I was off grid!

All went fairly well. The load I carried was still quite hefty and so my feet began to ache and my posture to sag as each day wore on, but I could cope and cover the 15 plus miles a day needed to reach my goal. I met many interesting people along the way or in the pubs where I ate each evening. I did not see many birds of interest, but had a good sighting of a country fox and an unaware hare.

Each day I rose very early and walked some way before stopping for a simple breakfast. On one occasion I sat on a bank to change from sandals to boots and to eat. The location was pleasant: a hill rose up behind me dotted with cattle and to my fore I had a wonderful view over a valley. I noticed the cattle coming towards me as I finished my meal, about twenty of them. I was ready to move on but they were upon me before I could pack up to go. Usually cows do not come too close and a shout or a wave deters them. Not this lot. Led by an aberrant one, let’s call her Kate, they crowded around me. Kate was determined to explore my bits and pieces which were strewn on the ground. She licked my tent bag (green) dripping saliva over it. I hit her on the nose – no effect. I grabbed the tent bag. She turned her tongue to my sleeping bag (not even green), slurp, slurp. The others kept pushing forward, but left it to Kate to do the exploring. I grabbed the sleeping bag so she started slurping away at my mattress whilst ignoring my heavy blows to her snout. Awkwardly hanging onto my bits and bags I managed to struggle out of the crush at last and luckily Kate did not follow. 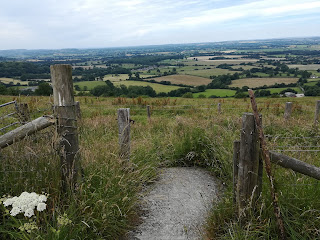 Entering Dorset I found the countryside particularly stunning. It’s Thomas Hardy country and best described by him, but here goes: rolling hills, valleys full of irregular fields bordered by thick hedges and fulsome trees. Every shade of green imaginable and so little in the way of human habitation that the scenes slumber in the warm sun evincing feelings of softness, peace and harmony.

My favourite village was Cerne Abbas: beautifully kept with three pubs one of which does not sell Palmers beer, thanks be. My nemesis was the next stop – Beaminster. I found a nice spot beyond the town in a wood near a stream (for my ablutions) and apparently only visited by dog walkers who seemed a friendly bunch. The only cloud on my horizon – the phone had stopped charging though I had juice in my battery pack. I could no longer access the maps  and without maps I could not follow the Wessex Ridgeway to Lyme because it was not well marked. I walked back into Beaminster and tried to get someone to charge me up in the pubs – no success. I did not sleep much that night since I thought that I must abandon the walk at that point: so near and yet so far.

In the morning after my “showering”, a dog walker passed by and I asked him if I might buy a map in Beamister. He said no because there were no shops of that sort and besides it was Sunday (I had lost track of the days).  However, he and his wife said that they had maps I might borrow so we arranged to meet at their car and they did indeed lend me a perfect map. Using that I pushed on, finally arriving in lovely Lyme Regis at seven-thirty the next morning for a quick swim in the cold English Channel followed by a journey by public transport back to Oxford.

Moral of the story: do not rely on mobile phones too much (actually it was simply the connecter that had failed) and be grateful to good Samaritans (I am returning their map). Steps completed approximately quarter of a million. Blisters – none. Beer consumed – lots.