My role in the French revolution.

Travelling through France from Spain is never dull, but our latest journey in mid November 2018 was definitely special.  This time we travelled west across Spain from our village of La Fresneda in order to cross the Pyrenees in the Basque country just above the famous city of Pamplona. We spent the night in a vast deserted car park next to a (closed) nature and adventure park and I was, quite unusually, taken ill. I had to find a doctor’s next day or could not face the 1,000 mile drive to England. Dr Carlos put me right, but the treatment seemingly denied alcohol which, though not essential, does light up the nights of travel.

We stayed in the delightful Basque village of Lantz on the second night, it was small, but had both a restaurant and a shop. Only problem was both were closed.  The locals were very friendly so I approached a lady and asked in poor French if anyone raised hens in the village and might allow us to buy eggs. She said no, but told us to wait where we were and quickly rushed back with five eggs! She then wouldn’t take anything in payment for them! Aren’t some people generous? This enabled to have a decent meal in the van, and it was very good.

Later in the trip we left the lovely village of Beaumont Sarthe just north of Le Mans where we had dined in a warm, friendly place served by a shy but helpful fourteen-year-old young lady. The village had an excellent river, ancient chateau and delightful gardens. However, heading into Alencon the road was blocked: black smoke poured from the roundabout and there were many people there in yellow hi-vis jackets. It seemed to us that there had been a bad accident, but this was no accident. In fact it seemed more like a street party - at a roundabout! Cars and vans were parked any old way, tyres were burning smokily, wooden pallets were burning merrily, and music was playing loudly in competition with sirens, car horns and raucous singing. I found it all quite exciting; many years had passed since my own demo days. 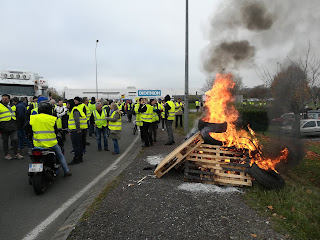 We were allowed to weave the van around part of the roundabout, the yellow draped figures shouting merrily at us. They were all smiles for us, but there was something altogether more serious going on. Just beyond the roundabout I parked up and walked back to join in. The smoke, the noise, the friendliness, the bizarre spectacle itself really energised me. I learned that Macron was the problem. To quote from one ragged poster he was: pompier, dictateur, royaliste, menteur, arrogant, opportuniste, nuisible. You probably get the message. Motorcyclists were a central part of the protest: revving their machines to the point of near explosion, roaring up and down the traumatised roads, weaving around the crowds. The protestors told me that it was all about increased taxation, especially on fuel. I didn’t know what side I was on, but I certainly felt part of the crowd. We had to take the toll road to get away – that cost us nearly forty Euros Mr Macron. 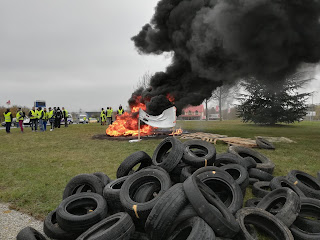 Then we were blocked again at Rouen, both in and out of the city, this time with larger crowds and longer delays. Hey, this was not so much fun after all. We then travelled north to Abbeyville where we hoped to sleep for the night en route to Calais for our boat to England the next day. We could not get in! Yet another protest barrier greeted us as we came off the main road, Darkness was falling when we were finally allowed to pass that barrier and then we hit another! Someone told me that we probably would not get into Abbeyville at all, so I reversed back and headed out into the darkness.

The gypsy in me

Perhaps everyone has within them the desire to wander, fancy-free. I certainly have and believe that I know the best way to achieve it. However, please don’t tell anyone the secret since there are already too many in the know – it’s via that king of the road: the motor caravan. Ah, you might think, real gypsies do not own motor caravans; they travel around in those wonderful horse drawn caravans shaped like a fat, lower-case ‘i’. And of course some do, but most do not.

When I wrote The Battle for Stow some years ago I interviewed gypsies who were attending the Stow Horse Fair, that controversial coming together of the tribes beloved by the travellers and feared by many of the residents. It was not an easy task since many of them were, rightly, suspicious of snoopers. However, one man did have a smart motor caravan and to help break the ice I told him I owned one too.

“What ya got?” he asked with interest, so I told him the make and model.

Not surprising perhaps since trading is what the fair is mostly about – and some of the gypsies I met confessed that they also have proper houses like the rest of us.

We have just returned from a ten day holiday from our Spanish village in the motor caravan. Some friends find this odd, assuming that a holiday is what we go to Spain for, whereas to us it is just another place where we live. The trip started in Spain then on to southern Portugal, after that to the UK and finally back to Spain – all in the motor caravan and without flying or taking ferries.
As usual the trip involved the very minimum of planning; the main objective being to explore Portugal which we reached on the second day. Arriving quite late we found, purely by accident, the walled city of Elvas and a convenient overnight spot in a car park in nearby club land where we parked opposite the local pigeon fanciers club.

The defensive walls of Elvas are unusual in that looking from above they form a star-like shape rather than the usual rectangle or circle – interesting. And, as we walked through the narrow archway into the city (definitely not motor caravan friendly), we were thrilled to find a fascinating web of even narrower streets, many leading up to the grand central plaza dominated by a fine white church. Elvas was a charming introduction to Portugal and there we dined on Portuguese pork and golden fish washed down with local wine and - no port.

The following days fell into our usual pattern. I went for a run whilst Margaret prepared breakfast; we showered then chose some destination from the map that looked interesting. We then drove there mostly by secondary roads, having lunch in the van at some nice spot along the way. On arrival we searched for a parking place big enough for the van, explored the place and if we liked it stayed, later finding a bar then a restaurant and so to sleep. If we did not much like a place we travelled on and sometimes had to find somewhere to park up for the night in darkness which can be difficult.

Our best night was spent overlooking a wonderful bay on the Atlantic coast a few K from the small inland village of Carrapteira. There we sat in the wind-buffeted van watching the sun set over the ocean then gradually spreading its fiery red illumination across the whole sky whilst we drank red wine and listened to romantic hits from the sixties. That night we ate in the van and woke to a beautiful dawn.

The worst night was in the coastal city of Lagos where we arrived in darkness and parked up in a potholed stretch of waste ground dotted with other vehicles like ours. In the morning we woke to the sound of a JCB digging a trench near our van.

But how did we get to the UK on this trip? You’ve probably guessed. On the way back we fulfilled a long term ambition and visited the Rock of Gibraltar. In retrospect I was more excited by the sight of the place as we approached from Algeciras than the actual visit though, once clear of the near frictionless border control, it is fascinating to walk across the airport runway in order to reach the city. 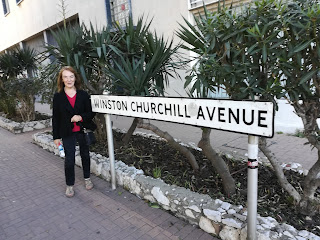 Once there it does seem odd to be spending pounds rather than euros and even odder that they leave the wallet so much quicker. It’s also a little weird to pass Holland and Barret (twice), to observe policemen on the beat wearing the old spiked helmets and to see so many fish and chip shops. I had a huge disappointment though. I entered a pub and asked the smiling barmaid if they sold real ale.

“Sorry love,” she said kindly, “you won’t get that on the Rock. Doesn’t travel you see.”

I refrained from giving her my lecture on Indian Pale Ale and sulkily ate my fish and chips. They were good, though pricey.  Probably much better than a hedgehog baked in a ball of clay. Do gypsies really eat hedgehogs? I’d like to try that – I think.