Why are we here?

Though I don't live there all the time, Oxford is a great place to be. Last night I had a choice of lectures: one by Steven Pinker (prolific author), one by a lady who has rowed herself around the world, and one by A C Grayling the philosopher, They were all free and, fortunately, I chose the latter.

One thing about Grayling - he looks like his name. He has a splendid mane of graying hair. He is also a kindly looking bloke (a word that he uses a lot, good man) and a wonderful presenter. The lecture was in a church, a fact that he, an ardent atheist, made great fun of as he introduced himself.

This man is more than a philosopher. He has started his own university: a private one charging fees of £18K per annum and offering one-to-one tutorials (like Oxford) together with generous grants for those unable to pay the fees.

His talk was about myths and he cleared up something that has interested me for many years: why do nearly all societies have religion? He made it sound quite simple. The idea revolves around agency. From the moment of self-awareness, humans have been well aware of cause and effect. When a stone hits the water we want to know who threw it. Perhaps we threw it ourself - then we are the agent. We caused the effect. When lightning strikes, or a rainstorm begins, or a volcano erupts then primitive man believed that some agency must have caused it. It could not have been another person, the effect is too massive - therefore it must have been a mysterious agent - a god. The next stage is to personify the gods, and perhaps to appease them by worship.

Where did the gods live? Usually on high inaccessible mountains. However, as time went by that was disproven, the heights were scaled, there were no gods. And so the gods had to be moved up, up into the sky, yet still doing their stuff. Now that we have explored the sky and there is no god there, god has become ineffable ('too great or extreme to be expressed or described in words' - a convenient cop out).
That's a brief summary, there was more. Then, in question time, a local Muslim Mullah came forward in his black robes and white hat. He proceeded to preach and was booed, "Where's the question?" shouted members of the audience. He aquitted himself well, asking: "Where does all this come from? Why are we here? Where are we going afterwards?"

Good questions, replied the philosopher politely, and then went on to explain. Religion can answer those questions in about half an hour. Remarkable! Using logic, analysis and reasoning, the scientific method takes a little longer. It requires years to truly understand cosmology, or particle physics, or genetics. Yet religion can answer those really big questions in  just thirty minutes! There is something wrong here. Scientifically, we are still investigating those three basic questions, and the work will go on and on. Yet people of religion already have the answers. Or do they?

I found Grayling very convincing in almost everything that he talked about, but particularly his statement that there is a middle way between religion and utter disbelief. It is humanism. Today I am going to join the Oxford Humanists and I am also going to leave the Oxford Civic Society. The two are not directly connected. I am simply cheesed off with the latter for its pathetic response to those awful flats that the University has built on our beautiful Port Meadow and I therefore think that my money would be better spent on something more fundamentally enriching.

(The talk was organised by the Richard Dawkins Foundation)
Posted by Rob Walters at 15:07 6 comments:

Margaret Thatcher is known to all. Dorothy Hodgkin should be: she is Britain's only female scientific Nobel Prize winner, a reward for her groundbreaking work in determining the structure of penicillin and vitamin B12.

It is difficult to imagine two women more different in character and political beliefs, yet their lives were closely linked: Dorothy was Margaret's tutor when the younger woman studied chemistry at Oxford University; Margaret, as Prime Minister, invited her old tutor to lunch at Chequers.

The book is entitled Margaret Thatcher and Dorothy Hodgkin in Conversation: Iron Lady versus Socialist Scientist and has already been released as a Kindle eBook onAmazon. A paper book will soon 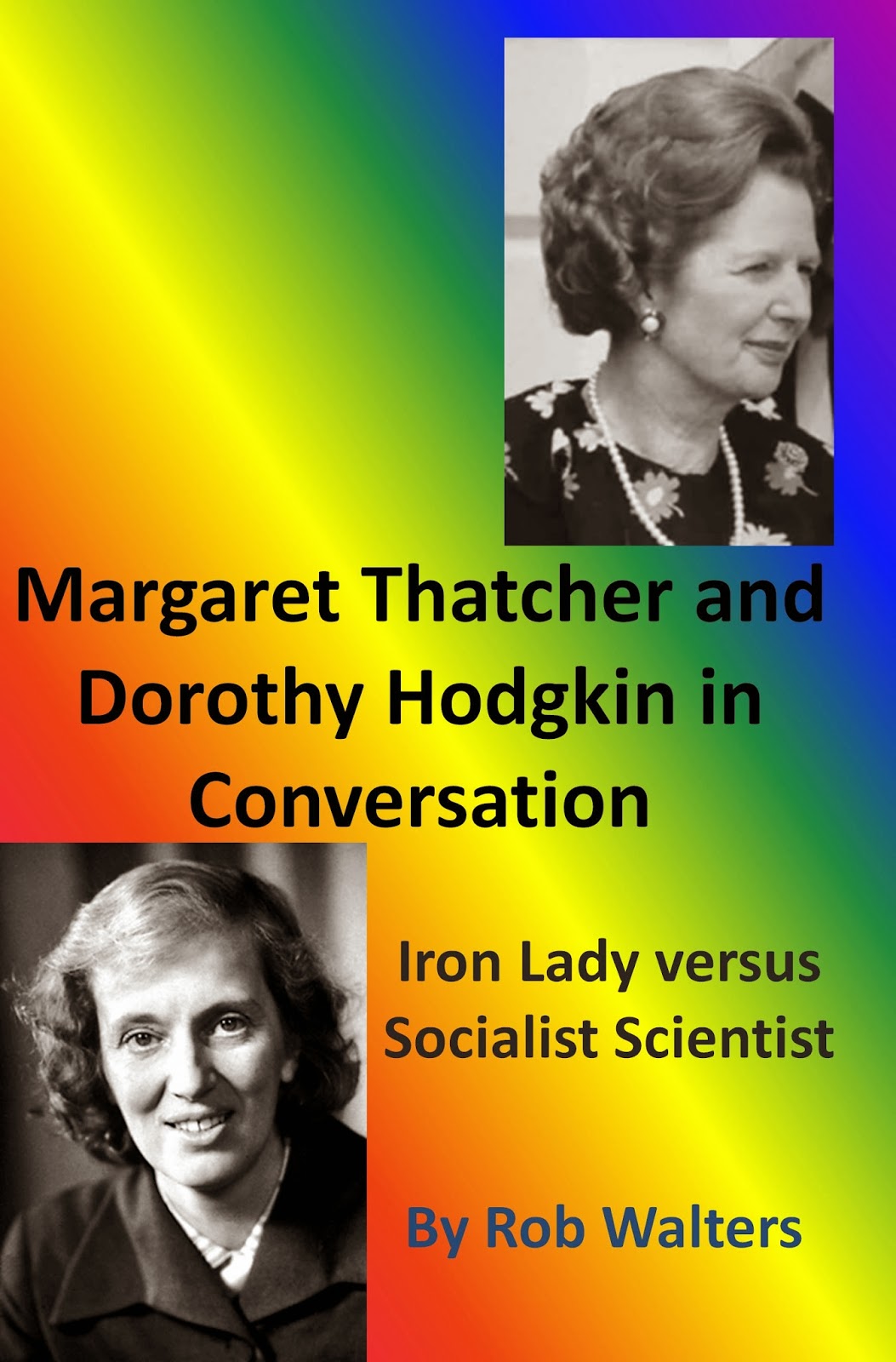 follow and other eBook formats are available from Smashwords.

The intimate conversations take place during Margaret's fourth year at Oxford while she carried out research work in Dorothy's crystallography lab. They range widely over topics from socialism to sexual freedom. No one knows exactly what they did discuss, but the conversations are soundly based in the factual world of post war Britain and reflect the characters of these two very interesting women.

Like most people my political allegiance has changed with time, and in the usual direction. Creating conversations between these two very polarised ladies has enabled me to continue a debate with myself that has taken up much of my life, and much to my surprise and delight friends who have read the ongoing manuscript have found it interesting, thought provoking and intriguing. I'm quite excited about it.

If you are interested in the book and don't know how to get hold of it just send me an email and I can help. The Smashwords site provides the capability to read on line and all sorts of formats which can be downloaded to PCs  and Apple devices. More details, including a sample are available at my bookshop. Just click here.

I'm writing this because my Web access is down. This peripatetic life can be frustrating at times. I have wired broadband at Stow and that's good. In Oxford I do not have a fixed line, so I use a wireless dongle for access and that's bad. If that fails (which it often does) then I have this thing called BT Wifi as a backup: it's crap too. In Spain we have nothing, and have to go to the bar to pick up emails and the newspaper via Kindle (the latter for Margaret). There they do have Wifi and its good, but they also have beer and other people which is both good and bad. Just now I am in Oxford and I have no service, or service so slow that it is worse than the early modem days for those who can remember them (just think of riding through the jungle on a sloth versus a jaguar).

OK, so why am I so dependent on the Web when I have the temerity to criticise the young and their addiction to mobile devices (see previous blog)? I'm not. I am not really dependent. Well mostly I'm not. We spend months in Spain and I do not suffer any symptoms of withdrawal. But then, I spend my days working with stone and cement and wood and such - a world in which the Web has no role (so far). I do not miss it and am unconcerned that I am missing news of great global events which would have little impact on me anyway. though, in all honesty, my wife does  keep me up to date with the news nowadays and I enjoy her interpretations very much. But in the past, when she did not have her daily injection of the Daily Telegraph I did not feel deprived.

Ironically, I need access at this time because I need to update my bookshop on the Web. And amongst the updates will be the introduction of social media buttons. Good grief, I didn't think that I would ever put a facebook like button on my site, but one must move with the times, going forward, eh guys? Fortunately I am also considering a complete overhaul of the pub area of the bookshop and the introduction of a Democratic corner. There will also be a new book to add soon, but I will announce that later: just now it's being read by friends and will no doubt need some rewriting.

By the way, if any of you do want to read any of my eBooks and haven't got a Kindle, then there are ways. The easiest thing is to download Kindle for PC which is free from Amazon and then you can read any Kindle books on your own PC. Alternatively I now have a lot of my books on Smashwords and that site allows you to download the books in a number of different formats including PDF which can be read on any device.

Did you hear of the chap who gave his old mobile to charity?
Charity returned it since, she claimed, it lacked credit.
He turned to his sister and said with severity.
Begin at home, or you will never come out to debit.
Anon
Posted by Rob Walters at 19:58 No comments: