Tours, Tunnels, and the Revolution

After the lock downs I’ve done OK for guiding in the past few months, but it looks like I’ve finished now for this year. Just a few years ago I was seriously thinking of giving it up – but I do enjoy the interaction with the general public (when they enjoy my tours, that is).

Somehow, the ghost tour, which I haven’t done for some years, has turned up again. A bloke called Bill stole the market with a dramatic show (he is an actor) which included burning books, magic shop knife tricks and such. He was really good I’m told, but his act was not my style. This year my current pimp asked me to conduct a few tours and I found that I quite enjoyed them. Nowadays I do not take them too seriously and most of the visitors seem to respond to that – and I do usually succeed in making them jump and sometimes scream at one darkish location. It’s difficult to find darkness in central Oxford nowadays.

Conveniently the tours end at a pub, The Royal Blenheim, so I have to down a few pints there to assuage my dry throat. This place has become Oxford’s main real ale pub in the centre and, amazingly, does not serve food. The only downside is that it does have those multiple screens displaying videos of men chasing a ball around a field, but I try to ignore them. Meanwhile two pubs which are very relevant to my other specialist tour at present (Tolkien and Lewis) remain closed. They are the Eagle and Child and the Lamb and Flag. Both are owned by St John’s College and I’m glad to say there is now hope for the latter’s reopening in February.

Do you remember the rise of the Middle Class Revolution some years ago? It’s leader and possibly only member, was asked when the revolution would begin and solemnly told the interviewer, “When I’ve finished decorating the front room, of course.” I’ve been a little like that fictional man for some months, but the bathroom renovation is now complete – so watch this space.

Though views of my videos took a nose dive at the beginning of October (I peaked at 222 views per day then overnight that dropped to 40 for no apparent reason) I’m not entirely, gutted. I’m told that the YouTube algorithm does that to you sometimes, so I’m carrying on but with shorter videos. The latest in my Oxford Insights collection takes you beneath the streets of the city through a long ‘secret’ tunnel. It’s fun, have a look. 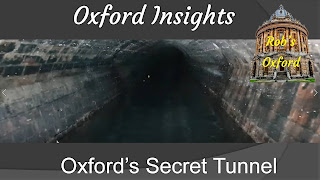 Might squeeze in another blog before Christmas, but if not have a good one. By the way did you notice the minor use of the Oxford comma in the title? Here’s a good example of why it’s often essential. “This blog is dedicated to my parents, Karl Marx and Adam Smith.”