The distance from Stow on the Wold in the Cotswolds of England to La Fresneda, our home village in Spain, is about 1,300 miles (200km) dependent on the route followed, much shorter if you take the boat from the UK directly to northern Spain of course.  Mostly over the past twenty odd years we have taken the longer route through France. I guess we have seen more of that country than most French people, but I cannot say I know it well and just now, after our latest trip, I think I’ve travelled it enough for one lifetime as a campervan driver. 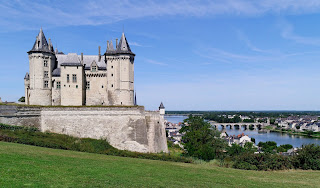 Over that period we have been wowed by the wonderful chateaux of that country, fallen in love with the splendid Périgord area and its wonderful Dordogne River, been tempted by ridiculously cheap houses in estate agent windows, moved by the beauty of so many splendid gothic churches, thrilled by the superlative engineering effrontery of many bridges, entranced by the countryside so much like our own in the north and then gtadually preparing us for Spain as we approached the Pyrenees, had major breakdowns of the van(s) and survived, been regularly reminded of the wasted school years supposedly learning French, had raging rows about navigation and finally, reluctantly, started to use Google Maps, chanced upon wonderful towns, villages and picnic spots, towed trailers full of anything from a motorbike to a cement mixer, carried bicycles to allow access to cities and a slower view of the countryside, witnessed and in one case joined forces with the French in revolt, received gut wrenchingly bad news whilst in transit yet have been warmed by the kindness of strangers on many occasions, and finally
we have so often despaired of finding anywhere to eat after seven in the evening.

That last point is interesting in that the problem has increased over the years as the French have shunned their wonderful restaurants with haughty waiters, check table-cloths and impenetrable but delicious menus accompanied by good carafes of local wine for the bland modernity of pizza places and kebab kitchens. And yet we finished on a high. As we approached Calais for the cross channel trip we looked for somewhere to stay overnight and locked onto Montreuil sur Mer which promised a wide selection of restaurants and was an easy ride to the ferry. Well, it wasn’t by the sea at all, but it did boast a campervan parking area and yes, loads of restaurants, and what‘s more they were open and even more there were people vying to get into them. 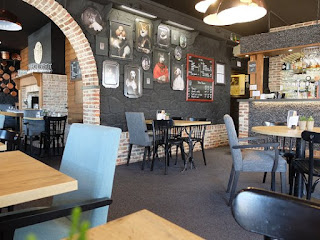 We took the last but one table at La Vauban, a brasserie. It was great: service, food, ambience, all of it and very French. I loved the strange pictures of dogs portrayed as humans, the somewhat haughty maitre d, the servile serving girl and the efficient wine waitress. I even did a Trip Advisor Review! The reviews are not all good though, but the owner responds trenchantly to all criticism which made me laugh out loud reading his spirited comments.

I really enjoyed that last trip during which we found a new pass through the Pyrenees to southern France where we carefully avoided the big city of Bordeaux, then spending a night on the intriguing offshore Île de Ré and another in the old town of Jumieges which lies on an S bend of the River Seine and has a famous and impressive ruined abbey. This may not be my last visit of course, but after an estimated total in excess of 50,000 miles (80,000 km) I no longer relish these journeys.