Spain, but not without mishaps

In fact we had a rather spectacular blow out on the M25 as we headed for Dover, even the tyre man was impressed when I took the wheel in to be reshod the next day. And then Lane’s my favourite micro pub in the port had closed which was sad: such a friendly place. 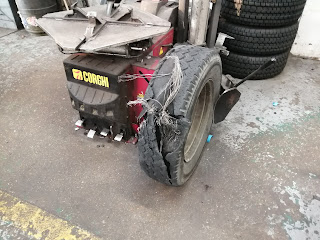 France was interesting regarding Covid. In the north they insisted on seeing our vaccination passports and checking that we were double vaxed. In the south they merely asked if we had been vaccinated and took our word for it. In Spain no questions asked though they did seem obsessively attached to their masks – even in the open air.

After a Covid imposed delay of two years we arrived at our Spanish village as night began to fall and struggled up the steep hill with our bits and pieces. The first great surprise was that the tiny grape tree that we  planted in a hole that I made in the road beside our garage had done really well, and the rose on the other side was, well, a little overwhelming.

That was the good news. The bad news was - I couldn’t get in. The door from the garage was completely seized, just could not turn the key in the lock. No worries, we have another door in the street behind our house two level up – but that too was stuck. This was getting worrying, though we could, of course, have retreated to the motor caravan. However I persisted with the second door and finally got that key to turn, yet still that door would not move – it was firmly jammed. Finally I had to use the policeman’s hard shoulder and bashed it open. What a relief when it finally gave way and we could enter our Spanish home.

Nonetheless, this left me with two problems doors to fix. The lower one I had to cut through with my stone cutter which made a hell of a mess of the door and its lock, so I had to spend many hours fitting a new locking arrangement and renovating the gaping holes left by the old one. I’ve also had to employ our friend Alberto, the blacksmith’s son, to grind down the metal frame of the other door so that we have access to our very old and neglected house. Then there’s the casseta and the huerto, the latter completely overgrown but yielding some delicious grapes and figs, a pleasure which was somewhat dulled when I noticed that some bastards had stolen my carefully installed tank which captures the rainwater which I then pump up to the casseta itself. It took me many hours and a quite a lot of Euros to install that thing and without it the lower part of the casseta is bound to flood and slowly subside into the ground.

All that said it’s nice to be back and to meet those who have survived Covid, seems that out village offered some sort of refuge from the crowded city of Barcelona during the pandemic. La Fresneda also has invested in a rash of parking places (mostly inaccessible to a motor caravan) plus a wealth of new, antique looking, LED street lamps. Luminous Electrical Displays to accompany the Loudspeaker Elucidation Distribution system which provides us all with important local news regarding deaths and markets. Bueno!