Before we go (to Spain)

A quick blog before we set off for Spain to see if the house and the caseta are still there. Should be an interesting trip, haven’t been over for some two years. One thing which will have changed, my motorbike will not be in the garage. Someone from a neighbouring town offered to buy it during the lock downs and I let it go (Yamaha XT600 for those interested in such things) so it’s the push bike or the van whilst there this time. 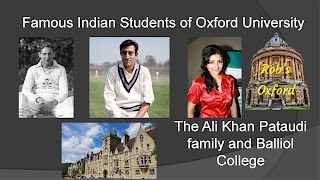 Before setting out I managed to finish another video for my Oxford Channel. This one is a bit different as you will see from the description below taken from the video. Have a look, any comments always welcome.

The video tells a remarkable story of three generations of an Indian family of royal descent. Their family name is Ali Khan Pataudi and their tale could be entitled two cricketers and a Bollywood film star. That would be remarkable in itself, but it’s their connection to Oxford which brings them to the Rob’s Oxford channel and that too is remarkable. In fact each of them attended the same college, Balliol College, during their student days at Oxford University. The video shows the college both inside and out with particular emphasis on its frontage and dining hall. It is the second oldest of Oxford’s 39 colleges and provided an impressive, architectural and historical background for the three students.

In the days of the British Empire the family ruled a small princely state called Pataudi located near to New Delhi, they were rich and remain so, Saif Ali Khan bought back Pataudi Palace and lives there to this day. The head of state was called the Nawab and Saif still uses this title.

The most senior of the three students, Iftikhar, played cricket for the Oxford team whilst at Balliol and achieved a record innings score against Cambridge. His son Mansur (sometimes Mansoor), also called Tiger, became the captain of the Oxford team in his day despite a serious injury to his eye in a motorcar accident. Both men had cricket careers subsequently playing for both India and England.

Tiger married a famous Bollywood star, Sharmila Tagore, a descendant of Rabindranath Tagore the world famous philosopher and poet. Their daughter Soha came to Balliol to study Modern History and apparently is the only one of the three to graduate. After beginning a career as a finance adviser with CityGroup she followed her brother Saif into Bollywood stardom.

The video mentions some of the other famous people who have studied at Balliol including four prime ministers of the UK: Boris Johnston, Edward Heath, Harold MacMillan and H H Asquith. It also explains the role of a famous master of the college, Benjamin Jowett in regard to educating Indians at Oxford and educating British men for the Indian Civil Service, the latter including George Nathaniel Curzon who became a Viceroy of British India.