Well, I did that walk to my roots. It took me four days following the Gloucestershire Way from my home at Stow on the Wold to Tewksbury and then down the Severn Way to my birthplace at Berkeley. The going was hard, the rucksack heavy and the sun burningly hot.  I wild-camped for the entire journey and spent the last night in a park (was a field in my day) overlooked by the house I lived in sixty odd years before. 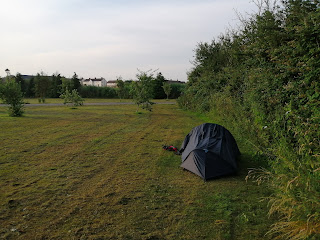 Returning to Berkeley brought back many memories of my boyhood and I wrote pretty detailed notes of both the journey and my visit when I returned. Here’s an extract which concerns the most famous resident of my home town, a man often mentioned nowadays, the man who first practiced vaccination.

I walked towards a place that I have very fond memories of called The Brook: it is a fresh water river that leads into The Millstream and is below the famous Berkeley Castle. On the way I turned off the High Street to take a look at the church. As I walked through the narrow lane, as I had done on so many Sundays in the past, I came upon Edward Jenner's house. This was a bit confusing for me  because I was certain it had been somewhere else when I lived in Berkeley. This house was large, white and smart and very near to the church itself. Anyway I wandered in to the grounds to have a closer look but unfortunately saw signs saying tours were only by appointment. Then I saw a man wearing a face mask at the side of the house and went towards him. He greeted me and said can I help you? I told him a little of what I was doing and of my background and connection with Berkeley. I also told him that we in Stow-on-the-Wold had experienced a wonderful talk by the man who ran this museum which was Edward Jenner's house. He then removed his mask with a flourish and it was him! The very man who delivered that talk over Zoom. He was clearly pleased that it had been such a success and told me that he had really enjoyed the presentation at Stow-on-the-Wold himself. 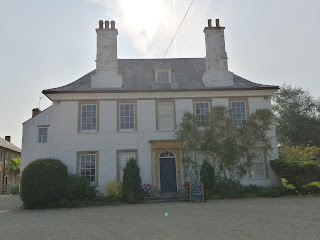 After that he said, “Would you like to come in and see the garden?” Would I? Of course I would. He showed me the various growing areas all of which were planted with things grown from seed catalogues which were available at the time of Jenner. We talked of various things and he took me to the place where the vaccinations were carried out in Jenner's day: a funny little hut made of stone but faced with wood and with a thatched roof. Rather nice, though I wondered whether it really looked like that in the past. He then showed me where the grapes (special ones) were grown and also the old boiler that had heated that area. I told him that I used to go to Sunday school thereabouts but I couldn't remember the big house and he explained that the house had then been the vicarage in fact. And a smaller place alongside, near where I first met him, was used for Sunday schools and so on. I couldn't remember that either but the whole religious thing may have been dropped from my childhood memory. He also told me that the original Jenner House was somewhere else in Berkeley and Jenner had moved into this house later in life. Then the house became the vicarage (as it was in my day) until the Edward Jenner Trust bought it from the church some years ago and turned it into the Jenner Museum. The Trust is funded by grants and gifts and from the income provided by people visiting the museum. At the end of my tour of the gardens we parted. He said to me have a good day and I said to him you have made my day, and I really meant it.
Posted by Rob Walters at 19:23