I did start to write a blog entitled  ‘Why make YouTube videos when you get nothing for them?’ but then I watched a programme of videos entitled ‘Voices of Ukraine’ on TV and my subject seemed utterly trivial against the background of the callous death, injury and destruction rained on  a country that has nothing to deserve such inhuman treatment. Ukraine is being viciously destroyed by the massive and seemingly impassive might of Russia simply because it wishes to be free and democratic.

Like so many we have given money to the Red Cross and sent essential goods via local people who have arranged transport, but it is not enough. I feel ashamed and wish that I could do more.

So we carry on, despite the awful reality of men women and children losing their homes their lives and their livelihoods. I do not pretend for a moment that I have some clever solution to this unwarranted attack by a corrupt and incredibly powerful neighbour. Of course not. But to write about my own petty concerns immediately after watching the terror invoked by the crushing forces of a megastate invading a blameless neighbouring country seems a betrayal to the innocents who are dying, being maimed, and terrified into evacuation by this unforgivable tyrant. 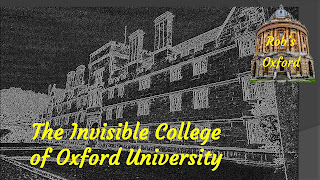 Since writing the rant above, Margaret and I have registered our house at Stow on the Wold with the Homes for Ukraine scheme so I feel less ashamed, and hence able to tell you that I have launched a new video. It is about a bunch of Oxford scholars of the 17th century who changed our world and is entitled The Invisible College of Oxford University. It includes the tale of a woman who survived hanging, a dog that had its spleen removed and a student struck by lightning. Have a look.