So, I’m still keeping busy. Like many people in isolation I am doing some things that I have ably managed to put off for years. The main one for me is clearing up and clearing out the garage. Actually it’s really my workshop, only one car has been inside during its whole life and that was when I changed the discs on the Mini some time ago. This clear out’s a big job, stuff accumulates somehow. If you are at all practical you amass a collection of screws, of nails, of nuts and bolts and so on. I certainly have done. Both my father and father-in-law were practical men and sort of left me their screw collections in their wills.  I have many screws. Things were getting out of hand; searching for a screw had become a twisted nightmare. But it’s sorted now, sort of. I have established separated collections of very long screws, long screws, mediums, shorts and very shorts. You cannot imagine the satisfaction that this has given me ;-)

But the big event of the last few days is more apposite to our long term survival: yes, one of our chickens has laid an egg! Greyone (the other grey is called Greytwo) started behaving oddly just a few days ago. She repeatedly popped in and out of the shed in a distracted manner, clucking all the time. Finally she settled into a nest box and started scratching earnestly at its wooden floor, then there was silence. After a while she emerged from the hut and the other three entered, presumably to take a look at what she’d been up to. I too had a look. Right in the corner of the nest box, lying on the bare boards her scratching had uncovered, was an egg: a nice, light-brown egg, quite large. On closer inspection it was slightly damaged at one end – but not bad for a first attempt.

Today we had another, this from Greytwo. It was much smaller (turns out that first one was a double-yoker) and a deeper brown, and perfect. Margaret made rock cakes with them and, before I knew that they were made with our own eggs, I opined that they were her best ever. Really.

We have tried to make Saturdays special during the isolation. Well, you have to break up the week in some way. We’ve already had a musical evening and were planning a Greek evening (Zorba) which had to be cancelled through a serious shortage of aubergines. So we had a Dakota Fire Pit night instead. It came about through our new neighbours. They were relaxing in their back garden on the Friday evening as I walked across the field near them. I did the decent thing and turned my eyes in the other direction to give them privacy (the trees that separated us were removed at their request and the new hedge shows little sign of budding up).

I had to look then, and there he was holding up a glass of golden something, lager perhaps, and between him and Jackie were flames. I looked at these in amazement, it wasn’t a barbecue – flames are no good for cooking.

“What’s that?” I asked trying to see where the flames were coming from.

“Fire pit,” he replied in a dismissive way. 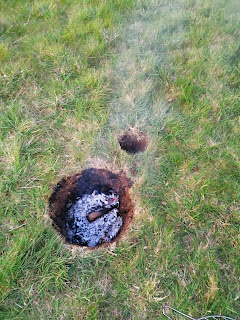 Back in the house I looked up fire pit on the web and found that everyone seemed to be selling them from Argos to Amazon. I am not, as usual, keeping up. Then, I clicked past the adverts and found some information on the Dakota Fire Pit which was invented by American native indians way before the cowboys came. This pit is free and anyone can make one, and that decided our next Saturday event. No Greek evening for us, we would barbeque Dakota style which is very efficient and makes no smoke (they say). Also the flames cannot be seen by your enemies – or neighbours. I dug the required two holes alongside our pond and joined them with an air tunnel. I then built a wood fire in the bigger hole and lit it from the top (burns more efficiently it’s claimed). 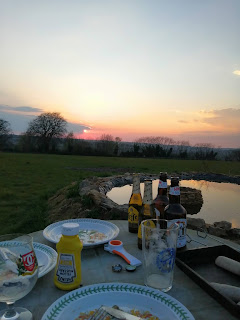