Letter from Spain: Easter without eggs

Easter, or Semana Santa (saint’s week), is a big thing in Spain, really big. And it’s not about bunnies, or hot crossed buns or stuffing yourself with chocolate. In fact, in our area of Spain, it’s all about drumming. Yes, I know - of course I know - it’s supposed to be all about the death, resurrection and ascendancy of Jesus Christ – and of course that religious thing still sets the scene for the Easter celebrations here. However, the thunder of the drums has mostly drowned out the praying and hymn singing in the churches, and most of the drummers are not at all religious - they do it because they enjoy it, because it’s a tradition and because it creates community. 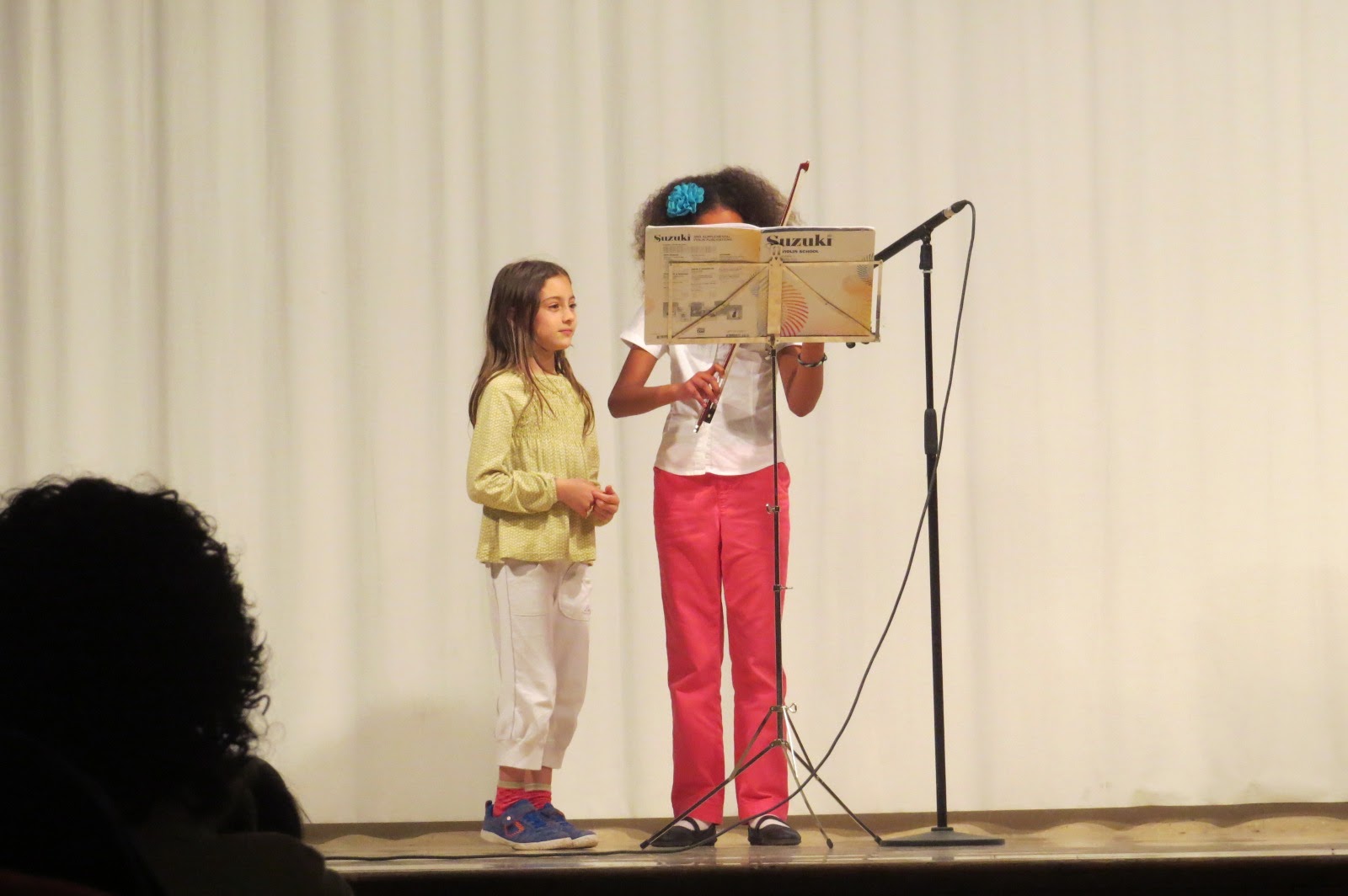 However, our week started without drums and within our own little community of La Fresneda. The village had organised a charity bash based on local talent. It started late, of course, though I had raced to get there on time. The first performer was a young bearded man with guitar – quite nice. Then Dolors, our friend, introduced her ensemble from nearby Monroyo including four reluctant kids, three enthusiastic old men Jota singers, a short play, poems from Dolors, plus a finale. All mercifully short and therefore quite enjoyable, though I hardly understood a word. Then the stonemason’s daughter played her violin, though at no time could we see her face since it was entirely blocked by the music stand. The star of the show was an aging lady from La Fresneda who sang Jota with and without guitar accompaniment and got the audience to join in. Jota, by the way, is the music of our area: the Flamenco of Aragon, if you like. The usual old man played his accordion – not well I think, but he loves it and the crowd loves him. The finale featured a magician. He did the cut rope trick that I sometimes do, but so much better and involving the kids. He also used the linked rings with two little boys as assistants, and then for a finale passed a rope through his body. Only three tricks, but he really made them last and did them well.

As ever, it all ended with bingo. But this was bingo with a difference: rather like a nightmare where the caller is a young woman who only says the numbers once and very quickly in Spanish. She was assisted by a friend who could not work the ball ejector mechanism that selected the numbers, so she was joined by a three-year-old girl who would not give up the balls and read out the numbers herself, quite unintelligibly. Many numbers seemed to be repeats. Calls of bingo were found to be wrong “incorrecto” shouted the three year old. Luckily, we did not win.

The week passed to the sound of distant, and not so distant, drummers practicing. Nearby Calanda is the undisputed mecca for drums around here. It is almost always featured on TV and there are claimed to be more than a thousand drummers there on a Good Friday. We have been to Calanda and will go again, but this time we went to the town called Valderrobres which is near our village for the “breaking of the hour”.
It was difficult to park, as expected, but we were still at the appointed place before quite a few of the drummers. Amazing, they practice for weeks for an event that is just once each year and must start at noon, and they turn up late! About a hundred drummers in total I guess, and all impressively dressed in shiny purple gowns. As ever, it’s the little children with their little drums that take the eye. The central Plaza de Espanya was packed. The lucky early arrivals were up above in the street that leads to the castle and some residents were out on their balconies.

Though it certainly can be, the breaking of the hour was not that dramatic that day, a roll on a single snare drum, followed by the thunder of all of the drums – big and small – as they echo the roll. It still thrills me, bringing tears to my eyes as I sway to the insistent rhythm. They repeat the sequence over and over until, at some signal from the leader, the big drum players hold up their free hands then everyone finishes together as they simultaneously bring them down. Almost immediately, the lead drummer plays a different roll and off they go again.  This lasts for maybe half an hour or more when they march off in two different directions to meet each other again in another half an hour. In that time the audience takes over the square and we, along with others, buy drinks: drumming brings on a thirst. Following a fast, furious and noisy finale, the players break up into smaller groups and seem to compete; some walk off with their drums, the day done.  Some play throughout the afternoon and into the night, their hands bleeding onto the skin of their drums. 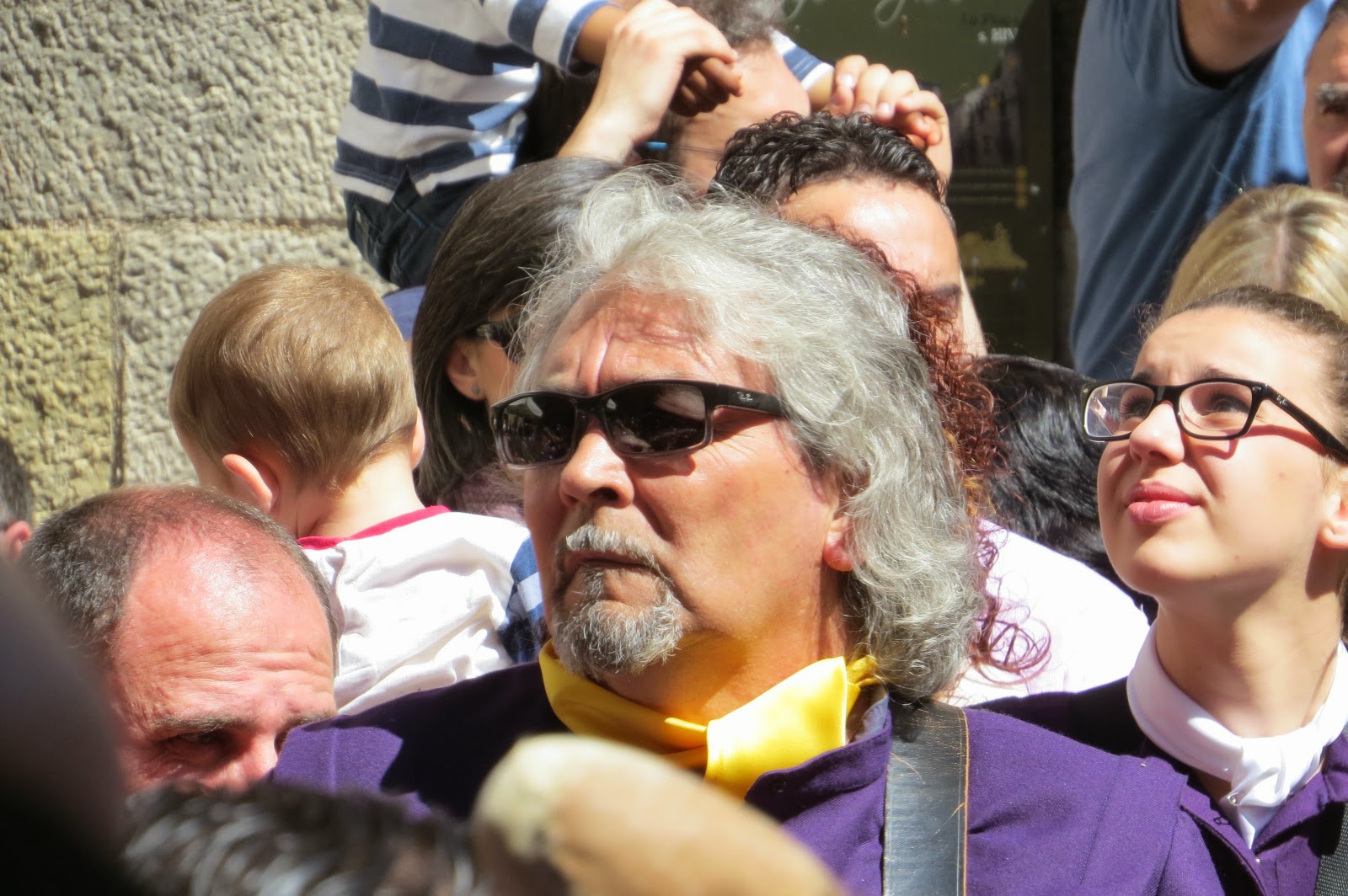 Our vantage point was not that good. We crossed the bridge over the river and pushed forwards into the crowd just where the street enters the plaza. In our turn, we were pushed aside by the late arrival drummers. It was quite a squeeze and many of the smaller ladies could not see a thing. Ifilmed one young man nonchalantly chewing gum as he played a big drum. That was just before I spotted Jesus, right there amongst the drummers. Of course, he had disguised himself by wearing sunglasses and feigning overweight. But he had the beard, the flowing hair and the beatific face. I’m sure it was him – at times he looked wishfully upwards to the heavens as he drummed. 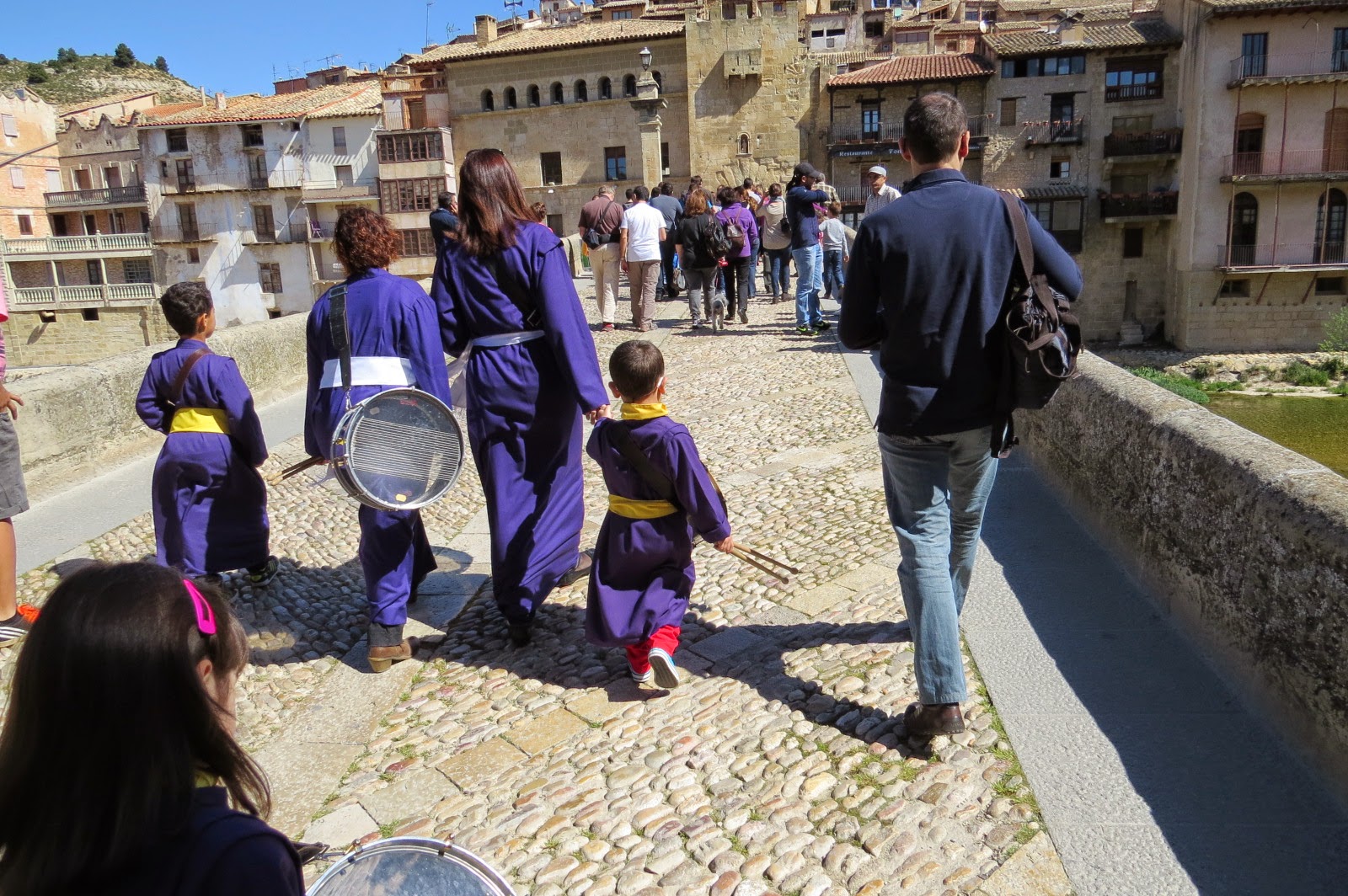 I do not enjoy being part of a crowd, but even this cannot stem the visceral waves of emotion created within me by all of those drums filling the plaza with sound and causing me to tap out the rhythm with my feet. Is everyone so affected? I do not know. One of the delights of the affair is to see whole families of drummers performing, the tiny ones being groomed for the future.

As if this wasn’t enough, our own village had its own procession of drummers that night. They followed the statue of the virgin from the little church to the big one. The virgin’s attendants were wearing white conical hats (Ku-Klux Clan as the opponents of this nonsense keep repeating). Later, the leader of La Fresneda’s drummers passed by our house. Fired by the emotion of the day and a few pints of fizzy beer, I opened the window and volunteered my services and those of my grandson, Robin, for next year. He accepted with enthusiasm.

We’ve been living here in the delightful little village of La Fresneda, our village, for nearly five weeks now, it will be the first of our visits of 2014 – we plan to return in September, travelling via Poland for a change. So, what’s new in Spain?

Well, I’ve been to a beer festival! It was held in the main town of our area, Valderrobres, and it was a first. Differences: there was no real ale, there were lots of unaccompanied children, there was a very noisy Irish band with bagpipes, drums and whistle, nearly everyone was smoking, nearly everyone was shouting. The beer was mostly artensal, a word that conjures images of idyllic people picking idyllic hops and malting their own barley with love, but actually means that it is not produced by San Miguel, or Estrella. It was also mostly ‘orribley’. The only brew that stands out in my memory was called Evil Wedding (yes, in English, the founder had a pop group by that name) and was the nearest thing to used engine oil that I have tasted (not that I have, of course). Most beers were cloudy (its artensal, so its natural ain’t it), all needed the help of carbon dioxide to reach the glass (plastic by the time we arrived). All that said, I enjoyed it, and the excellent pesto pizza at Terry’s pizzeria afterwards. The place was packed, but he found us a table near to the (artensal) wood pellet burner. I drank wine – very good.

My little project is progressing  - slowly. I think the whole thing is coming together now. On Saturday I treated my wife to a ten euro ‘menu’ in the café attached to supermarket in our nearby big ‘city’ of Alcanyiz. Don’t scoff, for ten euros you get three courses and the ability to keep watch on your laden supermarket trolley to ensure that no one runs off with it. And the waiter speaks some English and he has style. 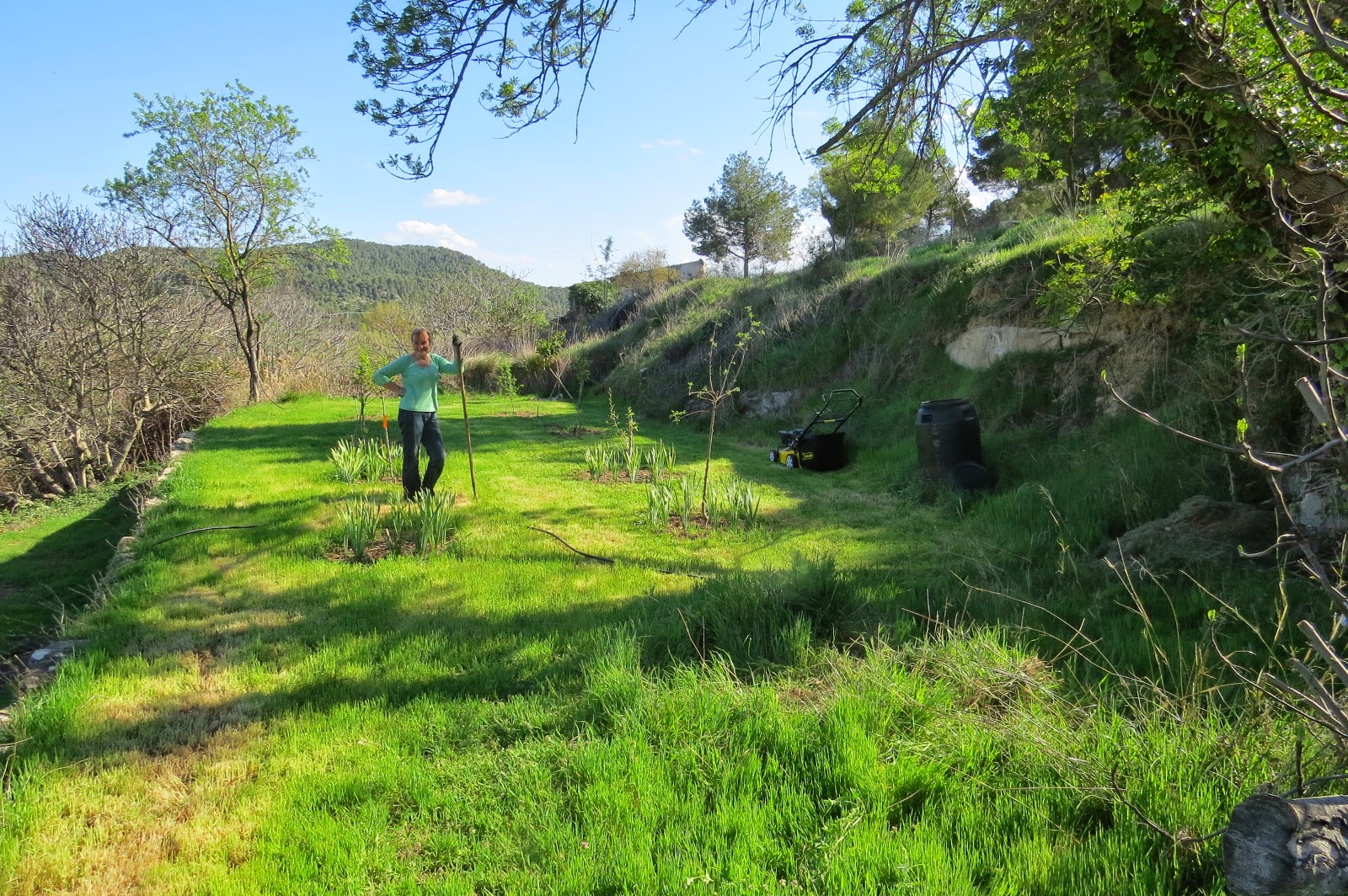 Afterwards we headed  to the ‘huerto’ (pronounced ‘where-toe’) where we planted eight grape stocks and some other fruit trees on our recently recovered third terrace.  If all goes well then one day we will be eating our own peaches, apples, pears, cherries, plums, apricots, loquats, olives and, of course, grapes. The land here is incredibly fertile, so the weeds grow exuberantly.  But now we have a new battle plan. We’ve bought a lawn mower! It’s yellow and the very sight of it makes the locals roar with laughter and the weeds wither in fear of decapitation. Just think, all three of our terraces were covered in dense blackberry infestations a few years ago. No w Margaret mows the ‘lawns’. 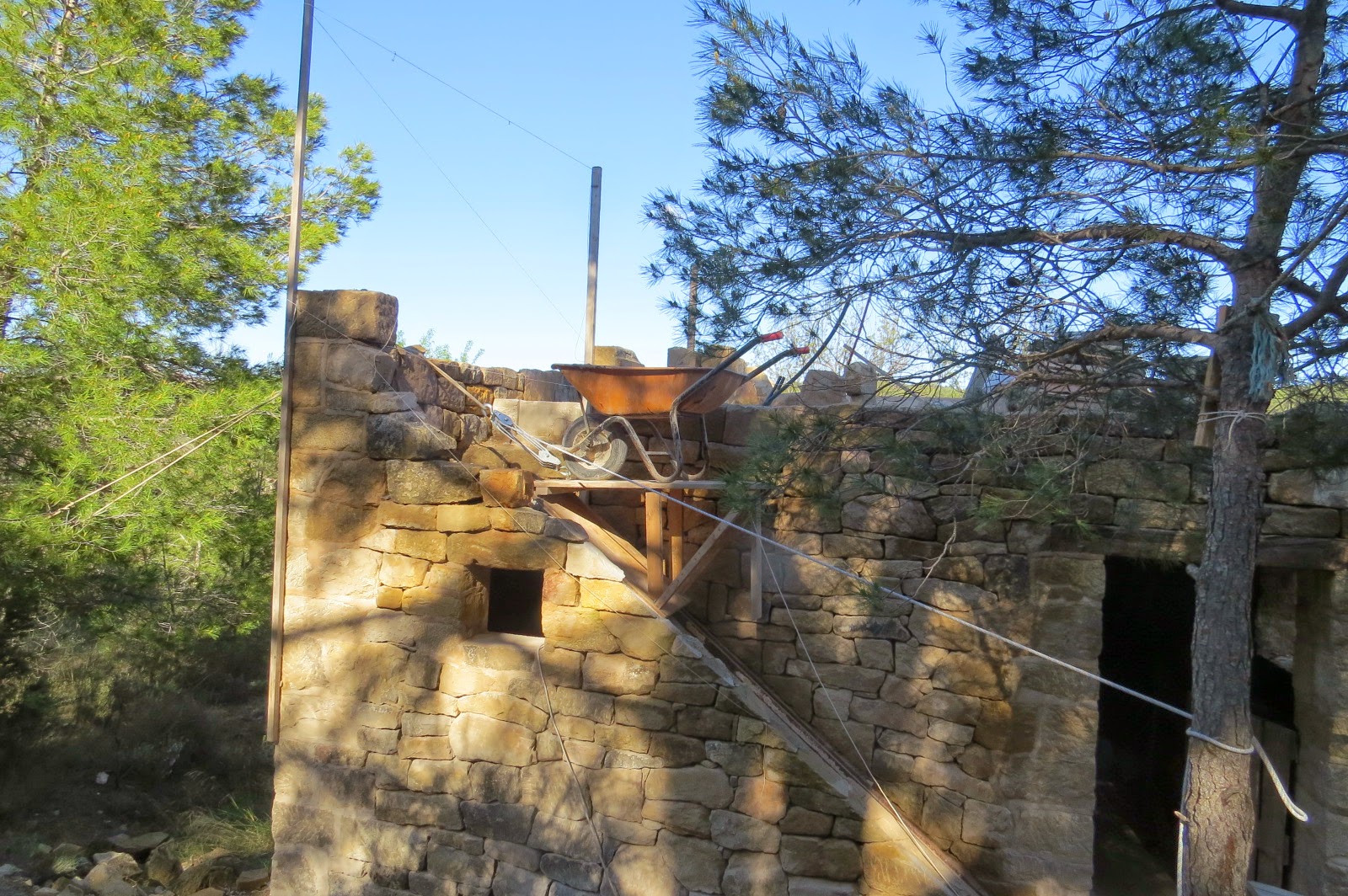 My stone hut is growing. Just today, I set two huge cornerstones at the head of what will be the stairs. I bought these, with other stone, from a Rumanian man from the town which held the beer festival. He didn’t go, he was too tired. This is not surprising since on that day he carried, on his shoulder, many of my cornerstones up the ladder to the new concrete terrace: I can barely lift them. I asked him if he went to the gymnasium. He said, “Piedras son mi gymnasium” (stones are my gymnasium). 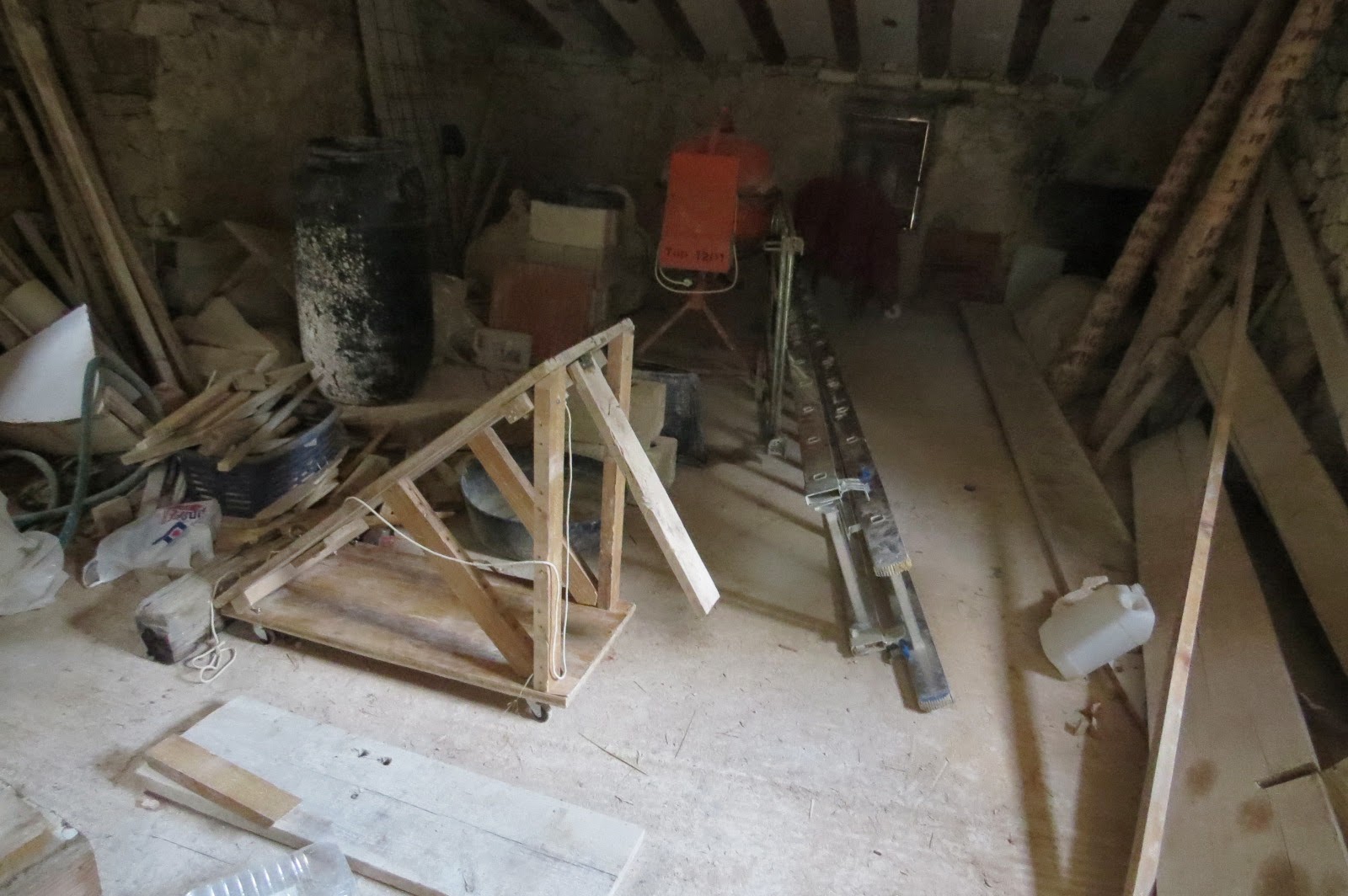 Some people wonder why I do not construct the stairs.The reason is simple: I cannot carry heavy stones or the concrete mixes that I need up there. The usual solution is a crane, but I have another. What will be the stairs is just a slope. I have now made a platform on wheels and can, just about, pull the large stones, or a wheel barrow full of wet concrete, up there using a pulley system. It is slow work, but it works. So, I am now building walls for the second storey; they will be sloping and at one end I will build a stone shed for water tanks and the solar battery arrangement. The rest will be a sun terrace from which we can survey our growing fruit trees whilst sipping a drop of Evil Wedding, or, more likely, San Miguel.
Cheers Roberto.