I suspect that I mention pubs quite a lot in my blogs: they are very much part of my life and I did come very close to buying one – twice. To me they represent many things: a place to drink one’s own choice of poison, a meeting place for friends, a place to make new friends or to chat with passing acquaintances, a place to play the only games that I really like, a place to enjoy live music, and so on (see my pub in the bookshop for more).

I know that I have often written about the two bars of La Fresneda, our Spanish village, but think that I have said little about the bars of Stow-on-the Wold, our Cotswold base. However, there is something interesting going on there at present which reflects the swingeing changes that have rocked the pub trade over the last decades. 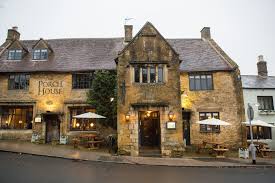 Years ago, pubs were owned by the breweries producing the beer, and in those pubs you drank the beer of the brewery that owned them, or lumped it. There were a few, so called, “free houses” where a variety of draught beers might be found, but by far the majority were tied to a brewery. Then, stimulated by government legislation, greed and corporate economics, things began to change: the big breweries sold off their vast estates of pubs and concentrated on brewing and spending their piles of cash. Pub companies bought chains of pubs which then purchased beer from the ever-increasing number of breweries and supplied it, at inflated prices, to the tenants and managers of their pubs. Later again, some of the breweries that had retained their pub estates sold the brewery, usually for housing development, and then outsourced their core competence: brewing. All of this has had a profound effect on the pub trade and, of course, on the pubs of Stow.

There is one area however where Stow does buck the trend and that is in closures. Pubs in the UK are still closing at the rate of twenty a week or more, yet those in Stow have been stable for a very long time. There are ten bars, some of which are within hotels, others are stand-alone pubs and just one is a club. The population of this country town is about two thousand so that is a goodly number of boozers.

When I first began to visit the place, the pubs concentrated almost entirely on selling drink, and were themselves partitioned into public bars for the working-class locals and lounge bars for the rich and the ‘better’ classes – or so it seemed to me. Nowadays the partitions have gone, the bars are mostly food rather than drink led, the classes have merged or drifted upwards and a true local is a rarity, my wife being one.  Meanwhile, some of the pubs remain tied to traditional breweries; others have seen many transformations.

I used to predict that Stow could not sustain so many drinking establishments and that the Bell, the most remote from the centre would be the first to go. It scraped along breaking the hearts of many an aspiring tenant and was an encumbrance to the pub company which owned it. I think the most enduring tenants during that period were two lesbians, one of whom regularly paced the bar draped in a large, live lizard. Even I once offered to buy the freehold of the place, but was turned down.

Finally, a lady entrepreneur did manage to buy it up, spent a lot of money on it, imported a very good chef, introduced well-kept real ale and installed pretty, polite barmaids. She brought with her a load of discerning and well-heeled customers and The Bell is now such a success that a brewery has bought it from her – Youngs’ brewery. Except that Youngs no longer brews beer! It sold its wonderful London production base some years ago and the beers are now brewed by Charles Wells. I presume the company is using cash raised by the sale of the brewery site to purchase pubs like The Bell.

Up the road from The Bell is a pub and hotel which has changed hands, and names, rather a lot over the years. It was the Eagle and Child at one time and is now the Porch House. Like many in this country, it claims to be the oldest in England. It too has now been bought by a brewery – Brakspear. But this brewery has also sold its brewing facility and its beers are brewed at the Wychwood brewery in nearby Witney, and that brewery has itself been bought by another called Marston’s located in Wolverhampton.

And so these bewildering cycles go round, recycling landlords and beers and tossing out dartboards, skittle alleys, pool tables and local characters along the way. Is it bad? Is it a tragedy? For some yes, for others not.

Nowadays there is a good selection of pubs in Stow that sell a range of beers and a variety of food in restaurant-like surroundings. At present, two of the bars are closed for renovation; they will no doubt open as gastro pubs of some sort. So if you want to play darts or pool in Stow-on-the-Wold, or want to drink with the few remaining ‘locals’ what can you do? Join the club, perhaps.
Posted by Rob Walters at 17:43 No comments: Links to this post

Another Christmas, another year

After years of action-packed family Christmas celebrations involving plays, games, quizzes, serial present giving and of course food and drink, I spent this one in the pub. Well not the whole of it, but quite a lot of it. Did I enjoy it? ‘Course I did – even the wet walk from the bus stop to Oxford’s Thames side Isis Farmhouse on Boxing Day failed to dent my appetite for real ale and good company. On Christmas Eve, we planned a tour of the pubs in Stow-on-the-Wold and barely got past the Bell, the first one. I met a man there who works for a Chinese telecom company in Bahrain which was really interesting (yes, really). On Christmas morning, we began drinking in another Stow pub which had 7% Christmas ale…and it was uphill all the way from there. Had a nice couple of pints in the Talbot with friends whilst overlooking the delightful Stow square, then returned to the 7% place which was still open (I did lower the alcohol content of my beer selection on this second visit and consequently made it back to the house). On New Year’s Eve, we took in some music at the Wheatsheaf in Oxford from the Pete Fryer band and Redox – Christmas would not be the same without them. And last night I ventured out alone and found Oxford in a hung-over, stay-at-home, post Christmas sort of mood. However, the Rose and Crown, one of my locals, was lively enough though.

You could say that Christmas, for me, is becoming like any other time of the year since I do spend some of my time in the pubs anyway, but that’s not so. There is a different atmosphere over the festive period: people are more relaxed (or more tipsy), they are more generous, more inclined to laugh at bad jokes and smile at annoying idiosyncrasies.

Whilst on the Christmas theme, I, like Father Christmas, have always had a beard. I am therefore amused and bemused to find myself in fashion. Quite amazing how many young men are going hirsute. Where does that come from? I seem to detect a middle-eastern look to these hair-faced youngsters – surely not.

Since my return from Spain, I have taken two groups on tours of Oxford. It is quite scary to do this after a break of nearly four months: will the accumulation of facts, stories, jokes, and so forth – the tools of a guide’s trade – be there? I once told someone of my fears and they suggested that I revise; they had no idea of the enormity of that task. There are thirty-eight colleges and a myriad of university building. There is a history of twelve hundred years. There is a long list of famous or infamous personalities. There is just too much. However, all was well, both tours went swimmingly. I think these long breaks are refreshing: my enthusiasm for the work is strengthened and the visitors respond to that. On both tours, I sold books and received tips. That is not usual.

On the book front itself my Swedish translator, N Christer Frank has just launched Political Chemistry (the Dorothy Hodgkin and Margaret Thatcher book) in his language. It is rather fun to see this book with a Swedish title. This is the third book of mine that Christer has translated and I now call him eagle eyes because he does spot typos that I, and a number of English readers, have missed. Based on his comments I am just now releasing a new version of the English book. Though this is hard work, you cannot believe how much of a relief it is to be able to do so: in the past persuading publishers to produce a new edition was all but impossible.

2015 will be the year I complete, and celebrate the completion of, my stone hut in Spain – the party should be in April or May. Just now, I am beginning to edit the copious notes I have made during nearly five years of work and, that done, I will begin to write a book about my foreign venture. I think it will be my twentieth!

Happy new year to you all.

Posted by Rob Walters at 12:20 No comments: Links to this post