Words from the Wise?

Just finished the draft of yet another novel and am holding my breath while I await initial comments from my two indefatigable first readers.

But there’s always something to do in Oxford. Recently, I crammed two lectures on very different topics into a single evening. One was on particle accelerators – don’t worry, I’m not going to faze you with the details. The speaker, Suzie Sheeny, was an attractive young woman from Australia and paraded her stuff in a lively presentational style that I found riveting. I have always been concerned about the Hadron Collider in Geneva: it cost so much to build and operate ($13.25 billion) and was so overly hyped that any result short of time travel was almost bound to be a disappointment to the general populace. Oh yes they did find this thing called the Higg’s Boson just where it was supposed to be. Was that it? Apparently so, and life goes on as before.

But Suzie convinced me that there was more. There are thousands and thousands of particle accelerators in the world nowadays and their existence and development do benefit from the work on the Collider. Most of these are used in medicine and they are, of course, much smaller, but they do have significant benefits in, for example, scanning and the treatment of cancer. Suzie’s work is in the development of accelerators that can be used in developing nations where the electricity supply is unstable and maintenance near non-existent. Great stuff.

Then, a rapid pedal from Trinity College to Corpus Christi. Though too late for the pre-lecture drinks, I did manage to get a decent seat at the back where I settled down to listen to Chris Patten’s take on the world. He is predominantly a politician, but also the Chancellor of Oxford University, the last Governor Hong Kong, etc, etc, etc. In deep contrast to Suzie the accelerator scientist, Patten’s main characteristic is gravitas, as befits his wide experience. He is just three years older than myself, but looks more. 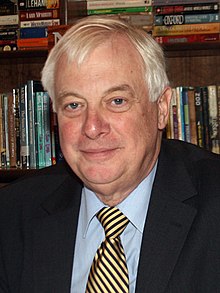 The scope of his lecture was grand – covering much of the last and current century. There were many interesting asides including a book reference which I have followed up, but the nub of his talk was a fairly depressing overview of the present state of the West. He touched on three major points: the 2008 economic crisis caused by excess borrowing and financial deregulation, growing inequality, and the “hollowing out” of political parties. On the latter he attacked his old organization in the UK, the Conservative Party, particularly its falling membership and, he claimed, its consequent move to extremism. A member of the audience, who sounded a lot like me, asked him why the Labour Party demonstrated the opposite effect – more members, more extreme.

He also touched on immigration from a European perspective and in so doing helped to develop my own thoughts when he contrasted the empathy evoked by drownings in the Mediterranean with facts concerning the African country of Niger where women start having children at 15 years and give birth, on average, to 7 children.

There was an elephant in the tiered theater of Oxford’s smallest college that evening, but the chairman drew back the curtains with a last question, the Brexit question. At this Lord Patten cast away his mask of philosophical equanimity and stepped in front of the dais to get closer to the audience and speak of madness and delusion. Phew, and this on the very day that Donald Tusk used the fast famous phrase, ‘special place in hell’. Fortunately, there was a little wine left to calm the frayed Brexit nerves after the show and this fuelled my cycle journey home through the rain to discuss this, and more, with my neighbour Carlos.
Posted by Rob Walters at 16:44 No comments:

Oxford and The Barber of Lebanon

After much dithering I had a hair cut yesterday and entered a new world: the Mancave. 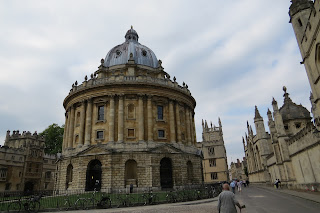 Close your eyes and think of Oxford. If nothing turns up then this particular blog probably isn’t for you, but please come back later. Most people drag up images about the university: dreaming spires, icononic buildings such as the Sheldonian Theatre or the Radcliffe Camera, students in their gowns, dons on their bikes, particularly beautiful colleges that they may have visited, famous figures whose minds were moulded there,  or perhaps floppy haired students punting, partying, debating, drinking or pontificating. And yet the city is not just about the university. The population of Oxford is about 154K and the combined figure of staff and students at the University of Oxford is 38K, though how many of the students register as residents of the city is unclear. Added to that we also have another university, Brookes which has a combined staff and student figure of over 21K. That’s a lot of university people by any stretch, but what does the rest of the population do? Serve them all beer, food and entertainment of course. Well, not exactly, there are something like 10 million visitors to the city each year, and they have to be accommodated, transported, fed, watered and, of course, guided (I do my best). And there are jobs outwith the service industry including the Mini factory, Oxfam and many start up companies some of which have been spun out of the universities.

Socially Oxford can, coarsely, be divided up by the points of the compass. I live in the northern quadrant where all the rich and famous people reside (I wish), but used to live to the west in paradise. Yes really, my address was 18 Paradise Square which lies on the edge of what is now a huge new shopping centre (with a John Lewis store for the shoppers amongst you). South Oxford is mostly given over to low to medium level residential, bisected by the River Thames, which just leaves the east. Overall the city is very diverse: it’s reckoned to have the third highest ethnic minority population in south-east England and 28% of its residents were born outside of the UK. It is East Oxford that’s the main contributor to this diversity, and so back to my haircut.

Though I have few restraints on spending regarding the essentials - beer, wine and travel - I can be parsimonious about other expenses such as food, clothing and haircuts. That is how I came across a barber shop intriguingly called the Mancave. On the phone I was given an attractive price and the information that there were only two people waiting. I cycled quickly down to East Oxford where the Mancave is located only to find that there were five people in the cave: three waiting, one in mid cut and the barber. He told me that I would have to wait for about an hour. Later, I noticed that he gave everyone that same estimate. I shrugged and sat down in the window seat, just beneath the dart board! I looked around. On a big screen coupled to a graffiti covered laptop I watched computer-game-like characters repeatedly killing each other to a background of repetitive computer-game-like music. The wall on my left was papered with old newspapers featuring blaring headlines such as The bomb that has changed the world, and on the wall beyond the barber’s chair there was display of maybe fifty vinyl LPs, all of which I’m sure contained better music than that playing in the cave. There were other things lying around that I did not really understand – or want to. So this was someone’s idea of a mancave!

The barber was a thin-faced man wearing a cap. He had a slim, agile body that wove around his current client like a snake deciding when to attack. Part way through my hour long wait, he asked me if I would like a beer. I made my usual reply that “I did not drink in moderation”, but I was touched by the gesture.

I found later that the young men waiting for a cut were from Colombia and Ecuador, though I am ashamed to say I understood nothing of their Spanish so we did not get to discuss their troubled neighbouring country. However, I did talk to the man who came in after me. He was from Italy and told me that he was a post-grad at Brookes Uni which is just up the road from where we sat. He told me that he was taking a masters in motorsport management. Now they don’t do that Oxford University do they? And yet it seemed such a suitable subject for discussion in the Mancave.

Finally, I was called to the chair. And yes, I found that my barber was from Lebanon, that his father had owned a house there, but was displaced from it because the place sat on Roman remains, that he had been ill for the last few days – hence the queue, and that he wore a cap because he was bald and potential customers might doubt the competence of a barber without hair. What a diverse haircut. I will definitely have to go to the Mancave again.

Reading this through I thought maybe, to some, it might seem sexist. But then I reasoned that there are plenty of Womancaves. However, they have more attractive names, have greatly refined decor, and are very much more expensive.