Out running the other day I nipped over a wall and collected a few pond plants for my own algae-ridden plash. Please don’t get the wrong impression, I wasn’t risking social interaction there, the pond is part of an extensive collection of pools and, though I was trespassing, there was no clear ownership of the pond I plundered (three small plants only).

On the way back I bumped into a pub friend from Stow. No, let’s be clear, we have to so careful of what we write just now, I did not physically bump into him. We crossed paths in a lane (happens to be his name actually, surname that is) and we were at least three meters apart while we chatted. Even with the pubs closed, he is still a happy man and, as expected, found something good to say about our current times.

“The air’s so clear Rob, and it’s so quiet. Walking around Stow it’s like it must have been 70 years ago.” 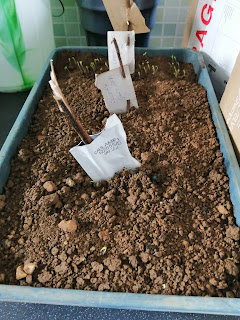 And he is so right, at least about the silence. I can hear my neighbour, though he is at a very healthy social distance away, steam cleaning his paving slabs for the umpteenth time. I also hear the other neighbours conversing and sometimes think that they must have wandered into our garden. Moreover, I can hear birdsong so much sharper, so beautiful, so intense. We, living between two main roads, have become conditioned to the background hum of people and tradesmen rushing about their business. And now it’s quiet, well relatively. There are some cars, lorries and tractors of course, but there are long periods of silence between their passage and the Easter weekend was particularly tranquil.

I can even hear my seeds growing! No that’s not true or at least only perhaps in my imagination. I can see them growing though. I do not think I have ever been closer to spring than this. I inspect my vegetable garden every morning and every morning there is some change, something popping through, weeds emerging, the beans in my cold frame shooting and so on. I would not say that it was exciting, after all I have witnessed all of this many, many times before, but it is interesting and the thrill of germination never quite dies. And added to that I am planting so many trees, hedgerow plants and pond marginals. Of the latter the star is a bulrush plant whose shoot is well out the water and reaching towards the sun at a rate that makes it seem a little taller each time I pass. Sadly, in a way, most of the planting and seeding is done now, so I’m reduced to watching, weeding and watering. Ah, how I love it – alliteration, that is. The two photos of my main seed tray may help to convey the excitement – they were taken roughly one week apart. 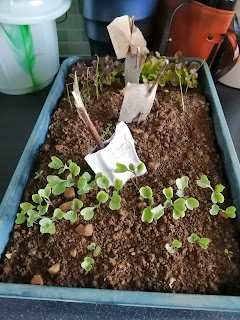 And there is the interest provided by the four girls: the chickens who eat, drink, crap and cluck, but still do not lay eggs for us. On Easter Saturday we gave them a topical task to perform. Both my sprightly neighbour from two houses up and Margaret had made hot cross buns for the previous day and had a few left over. With carefully controlled synchronism they each plonked one of their buns into the chicken run and we all, from a social distance of course, watched their reaction. The birds, rather disloyally I thought, went first for Delia’s bun rather than Margaret’s. No loyalty there then, and no eggs.