Well, it’s been over three weeks since I left Oxford for isolation in Stow and it doesn’t seem that long. Of course I vaguely miss visits to the city’s many pubs and their wide selection of real ales, I miss the music and the intellectual stimulus of lectures and so on and on, but I’ve been busy and spirits are high. I did have one bad night when I feared that the breweries might have to close because of the lock down. But next morning when out running I paused to talk to an old man (my age possibly) who seemed quite desperate for a chat. He told me that he had done all he could to the garden and that his daughters kept him supplied with the essentials.

“What about booze?” I asked semi-jokingly, but actually a question that was at the top of my mind.

He told me that he was a Mason and could get all he needed from the Lodge in Stow, so I asked him if I could sign up. Not really, I’m sure I would be black balled. But he did tell me of a brewery which provided home deliveries in these strange times. I contacted it, but Stow was too far away - so convenient for Cheltenham, Oxford, Cirencester and so on, the town is in fact distant from them all. But then I remembered Purity, one of my favourite beers. I contacted the brewery and they did deliver beer and it was free (the delivery not the beer) provided you ordered enough, I did, and now have it, so that’s something else I need not worry about.

Meanwhile I have been rejected. I volunteered to help the NHS as a home based support caller and was accepted subject to my identity being confirmed. It wasn’t. No idea why, apparently they (RVS) cannot tell you that but provide a long list of possibilities. So I tried again, but no good. They are no longer accepting volunteers. Such a pity. All my Samaritan training going to waste – and I so wanted to do my bit. I feel a little guilty pottering around my little bit of the Cotswolds when others are doing so much to help.

But I’m busy. I’ve knocked a few things off the to-do list and I finally managed to find someone on the web who could supply hedging. I immediately ordered a bargain bundle of 100 hedge plants of unknown variety for the northern perimeter of our field and ten more specialised shrubs to grow next to the field pond, hopefully the latter will attract birds other than the regular pigeons and crows. The order came much more rapidly than I expected: a huge bundle that I left untouched for the requisite few hours and then set to work, hard work. For each tree I dig a hole in the field (which is not easy because I usually hit stones quite quickly) then I set up a support stick, after which I put a little root growing magic stuff in the hole and then the hedging plant itself. I backfill, water, then replace the turf – upside down. Each planting takes about ¼ of an hour and I have well in excess of 150 to establish – you can do the arithmetic. It’s a big job and a hot one, but the weather is so good that I can mostly work with my shirt off (no photos). And it’s nice to be planting more greenery.

On the green front my early potatoes are just peeping out of the ground and so are some of the other seeds. I now have 25 lines of vegetable, etc coming on. In normal times I hurriedly dig my plot and prepare it, throw a few lines of seed in then dash back to Oxford for my other life. Now, I have no other life so, day by day, I can watch the seeds grow (hour by hour sometimes). This might sound like watching paint dry, but it is not for me. It is still a thrill to see the seedling appear and gradually form themselves into the adult plant. One of the most interesting to observe is leek. It takes some time to germinate, then pushes up a green loop – a bit like an onion seedling with the point stuck in the soil. Then, after a few days the pointed end springs free of the soil and reaches for the sun. Wonderful, I wonder why it does that.

Like many people just now I have begun to wonder exactly what viruses are and how they work. Fortunately there was an excellent TV programme on this just the other night. It graphically explained how the things get into the body and use no end of tricks to dig right into the nucleus of cell then take it over so that it starts replicating the virus.

No one seems willing to define these viruses: are they actually alive or not? Whatever the answer to that may be, this Corona virus is virulent: its contamination rate is such that two people with it are likely to pass it to five more, then 12.5 and so on, and this leads to really scary graphs like the one below. This is why we have to isolate ourselves. That is why there is no excuse for getting the thing and passing it on. And after that… 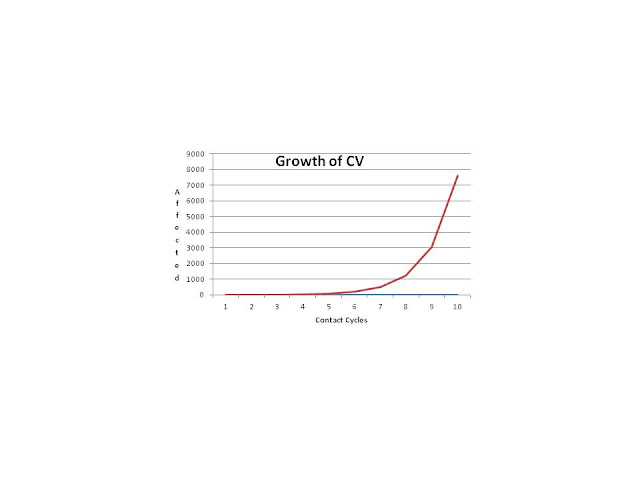