I suppose we transgressed the social isolation rules by collecting the chickens, but at least the lady at the cash desk wore gloves and wiped my credit card with an antiseptic tissue.

The chickens were subdued as I drove more placidly back to Stow-on-the-Wold, but they did not know that they were now homeless. Fortunately, I knew what I had to do. I left them in their cardboard box and entered our small garden shed. I removed the two bicycles, many buckets of hand tools, the recycling containers and no end of bags of stuff for Margaret’s flower garden. I then cut a small door into the rear wooden wall which faced the back garden and started to make a run for our guests on the garden itself. Luckily I have lots of stuff for this sort of thing. I made the run from beanpoles, surrounded it with some rusty chicken wire I had stored in the field and then covered it with netting from an old fruit cage. After that I used an old gate and other stuff to section off the chicken area of our little shed. I then placed the cardboard box on the hay-strewn floor and opened the lid.

And what happened? Nothing! The girls had either taken to the box or were terrified of entering their new home, perhaps both. I tipped the box up a little, the poor things hung on for dear life. Then I tipped it right up and three fell out, fluttering and squawking. The last one, Blackie (they suggested their own names) would not budge, even with the box upside down. I had to give it a sharp tap and then she too fell out with a resentful squawk.

It took a while before they ventured into the run. Whitey was first. She stepped very cautiously down the drawbridge which also serves as their door to the outside. Taking a quick look around, she presumably decided that she did not like the place and re-entered the shed. The others watched in wonder. However, after some time they all ventured out and did what chickens do: they pecked away at the ground searching for edible morsels. It felt nice to have them. 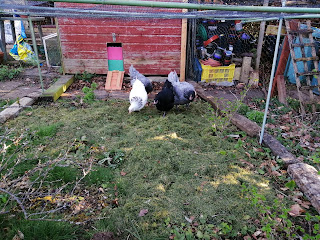 Then I had a thought. This corona virus thing will not go on for ever, things may never return to what we now regard as normal, but, assuming that we do survive, we will be able to associate again. I will return to Oxford to resume guiding and my other pursuits and we will be able to visit our home in Spain. But what about the chickens if we do all that? This is the moment when I started work on my prototype automatic chicken feeder.

I am still running every other morning. There are not many people about and those that are look worried, as if I might transgress the two meter rule. On the other hand it can be difficult to avoid close encounters, especially on narrow pavements. This morning I ran away from Stow towards the village of Broadwell, then took a footpath back towards the town. As I turned a corner towards home there was woman just in front of me, walking in the same direction. I could smell her perfume! Social distancing had been transgressed!

Perhaps I should run around our field where the only person I might meet is the woman I sleep with! Be a bit dull though, the running that is. That morning I saw the three llamas that live in a field near Broadwell. As usual they looked shocked to see me, like giant rabbits caught in a car’s headlight.

No eggs yet. Yesterday we went to the nearby supermarket to purchase supplies in the hour allotted to over 70s. The place was packed, almost every trolley was taken and the car park full. People were waiting outside in a spaced-out, highly-organised queue. Surely that spoils the whole point? This arrangement created a false peak in shopping. We did not wait. Fortunately Margaret, after much groaning at her phone and general frustration, managed to acquire a slot for deliveries from the Sainsbury supermarket. Phew, my small emergency beer hoard remains intact.

There is some light at the end of this strange tunnel though. I see that scientists from Oxford are recruiting healthy people to sign up as guinea pigs for a potential coronavirus vaccine. And someone else is working on the use of infected blood as short term method of training our immune systems. Worrying news from the USA though where the death rate seems to be running high.