Geology rocks: A day on Dartmoor

Dartmoor, for me, presents a chilling childhood image of an impregnable and inescapable grey jail surrounded by inhospitable craggy moors shrouded in mist. A frightening place populated by bloodthirsty and indestructible criminals who did somehow manage to escape from that awful prison. However, my recent visit – a field trip with the ever-popular Oxford Geology Group – has created a rather different picture.

Geology fascinates me, that’s why I joined the group some years ago when it was a moribund interest group, running a monthly talk and occasional field trips for its ageing and unwelcoming membership. It has now been transformed into a buzzing society with a very active website, oodles of lectures, lots of young members, field trips to everywhere, and a nationally important annual colloquium. It was whilst I stood on Blackstone Rock a prominent windswept tor in Dartmoor, that the idea for this piece formed. The man who started and fuels this little revolution shouted, “How come there is nothing on our field trips in Rob’s Blog?” And now there is. 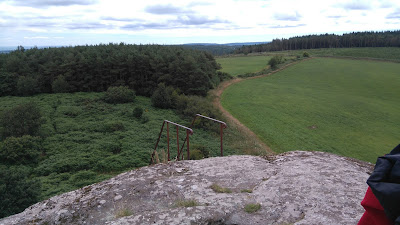 What I really aspired to in joining the group was to look at a mountain, a valley, or a landscape and determine its geological life history; I wanted to look at rocks and say what they were and know more about their composition; in short I wanted to know all there was to know about this little planet of ours. Hubris.

What I have learned is that, though based on science, geology is hardly a science itself. However, I do now know that the grander mechanisms of geological change: plate tectonics, lava flow and cooling, erosion and sedimentation are all visibly true; and the stratification so ably demonstrated by William Smith’s famous map of 1815 makes sense of it all. I have also convinced myself that this is not a subject for the amateur. A solid knowledge of geology crosses many scientific boundaries and can only really be achieved by years of study. Nevertheless, I still enjoy the geology field trips very much. With a good guide they provide eye opening tours through landscapes which you may have seen before, but could not understand. A good guide adds another dimension to a panorama, something that Richard Scrivener certainly achieved on the Dartmoor trip. Of course, I understand that he stands on the shoulders of Smith and the geologist who followed him; nonetheless to transform what is simply a rocky terrain into a fascinating and logical story is a rare talent. It’s like walking down a darkened lane, then walking back in full sunlight.

I now understand that Dartmoor was a vast pool of lava which formed below ground level some 280 million years ago. The lava cooled slowly producing granite containing very large crystals of feldspar which we could see clearly at Blackingstone Rock. I also learned that the formation of tin-producing minerals so important to Dartmoor’s later industry occurred 3 million years after the formation of this great deposit of granite, itself called by geologists a ‘pluton’ after the god of the underworld. This was then followed by millions of years of erosion removing the crust above the lava and then digging into the granite itself leaving the occasional outcropping or ‘tor’ of which the Blackingstone Rock is one.

What will always trouble me is a simple question: what is granite? OK, I know it is an igneous rock formed from slowly cooling lava, but that tells you little of its physical appearance. When I look at a metal I can often determine what it is by colour, hardness, surface appearance, and so on. Granite can seemingly be of almost any colour dependent on the proportion of the various minerals that make it up, it can also be coarse or fine so how can you be sure that a rock is granite? My investigations on the web only served to complicate identification.

That aside, this was a great trip. After a good pub lunch accompanied by excellent Dartmoor beer Richard led us across the moors pointing out the cuttings made by the tin miners of old (we did not visit any underground mines). The ore that contains tin is called cassiterite and it appears as veins in the granite. Richard did show us some, it was dark reddish-brown and not particularly impressive. On the other hand, many of the rocks in the deep cuttings glittered attractively. Unfortunately this had nothing to do with tin: the glittering was produced by specular hematite which is an iron ore! I picked up a small stone with a wealth of this shiny black stuff embedded in it and have now deposited it in the dark confines of my stone collecting tin along with the other neglected pickings from other trips. 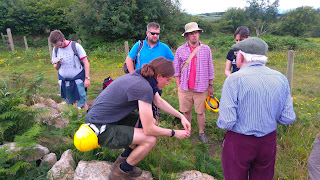 After a visit to a quarry we began the long drive home arriving back in Oxford at about nine. I was dropped off at a pub then visited two more that night and, do you know, no one mentioned the hard hat hanging from my backpack. I thought that it would be a great conversation starter, but it was Brexit that took centre stage.
Posted by Rob Walters at 19:04