Tunnelling through Europe as a drain mole

This trip to Spain was our longest by far: it took three weeks and on the way we visited Belgium, Germany, Poland, Slovakia, Italy and France. In three and half thousand miles (5.6 Km), we suffered only two minor collisions: both affecting the same wing mirror!

Most of the time we were above ground, but we did spend many hours in tunnels: like moles we threw ourselves into the ground, popped out for a few seconds then under again. Unlike a mole, we could see, but I can assure you that there is little of interest in tunnels except, perhaps for civil engineers (damned impressive curve that, just look at the finish on that concrete, etc). One tunnel was over two miles long…and the words ‘never ending’ were mentioned.

How does a mole navigate? I guess it does not; after all, it has nowhere in particular to go. A mole’s journeys must be fairly random (witness the tell-tale molehills) searching for the next worm. They are a bit like us on our journey: for ‘next worm’ substitute ‘next pint and a schnitzel’; gosh I ate a lot of schnitzels, love ‘em.

SatNav, of course, does not work below ground, so would be little use to moles and, though our radio is SatNav capable, we do not have the necessary disc to enable it. I am in charge of route planning, whilst Margaret is the real time navigator and back up sign reader. We use maps of course, and as a back up - in other words when we get lost - I ask for help. We do meet lots of nice people that way. I would not say that we deliberately get lost, but it is worth considering.

Italy loves tunnels. I do not know why, perhaps there is some link here with macaroni. The coast to the west of the incredibly busy city of Genoa is laced with them. In fact, the gaps provided by the elevated motorways which bridge the deep valleys between each pierced mountain range are much shorter than the tunnels themselves. Yet the coastal road is incredibly bendy and often dangerously narrow for a motor caravan, so the mole route is essential. It costs of course. Margaret is in charge of payments since the toll booths are on her side of the van. It was quite amusing to watch her antics as she almost climbed out of the window to reach a high ticket machine, or almost vanished as she dangled down to make a payment. I almost lost her once. 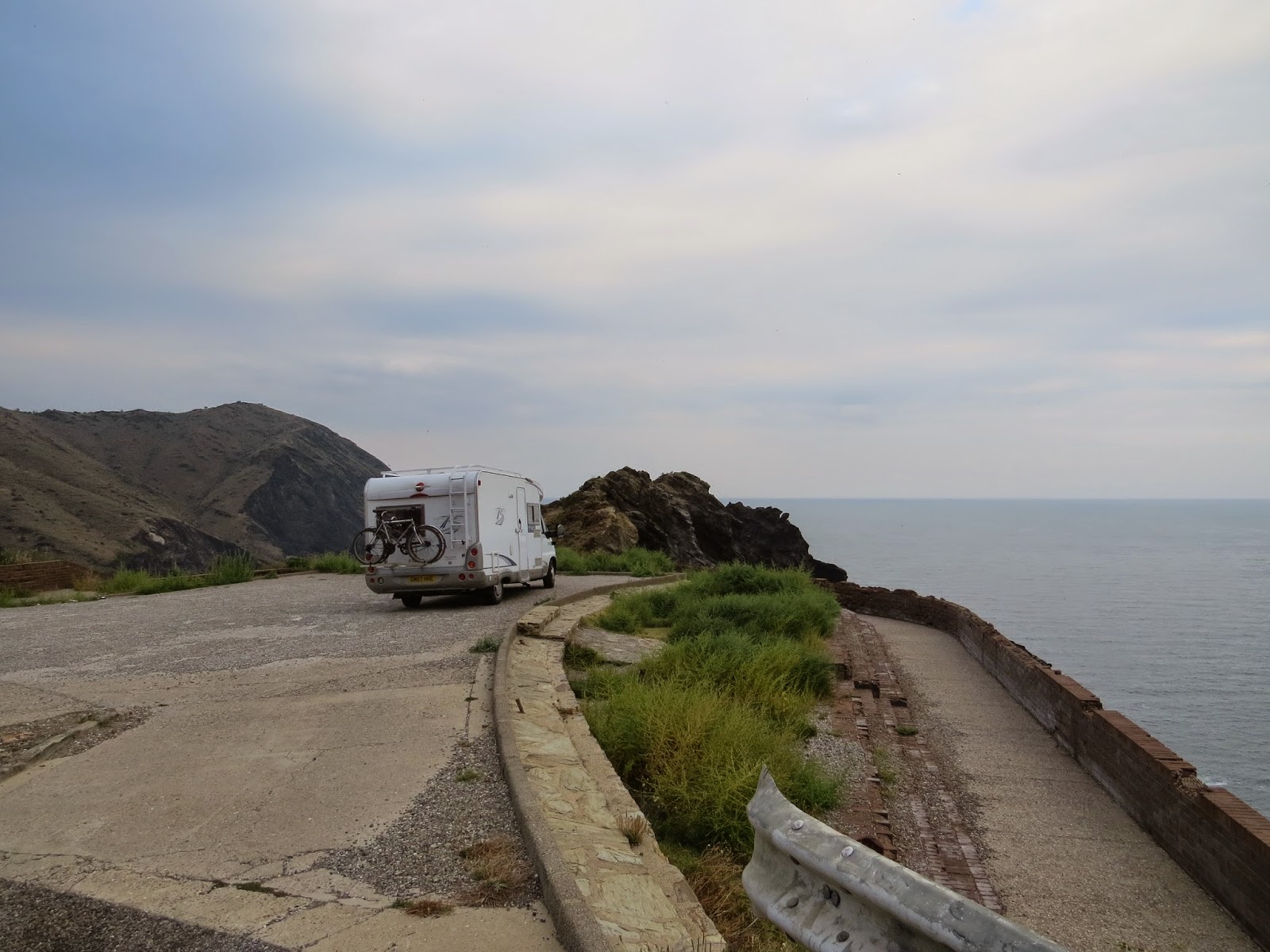 Towards the end of our journey, we actually slept in a tunnel! Portbou is the first resort on the Mediterranean coast below Perpignan. It has a wonderful mirador (viewing place) high up in the cliff side looking down towards the village in its bay, and south along the Costa Brava. There was no one else there and no notices barring overnight sleeping in motor caravans (this was Spain). So we overnighted there looking forward to breakfast with views to die for. At about four in the morning, I could stand it no more: the howl of the wind and dangerous rocking of the motor caravan on its springs became too much. Unwilling to die, I drove down into the village and parked in a very long tunnel beneath the railway line, just alongside the notice that stated ‘Danger. No Parking in case of rain’. The howling of the wind was replaced by the sound of trains overhead and wind-blown plastic bottles bouncing through the tunnel. We did get some sleep though, then returned to our mirador for breakfast. 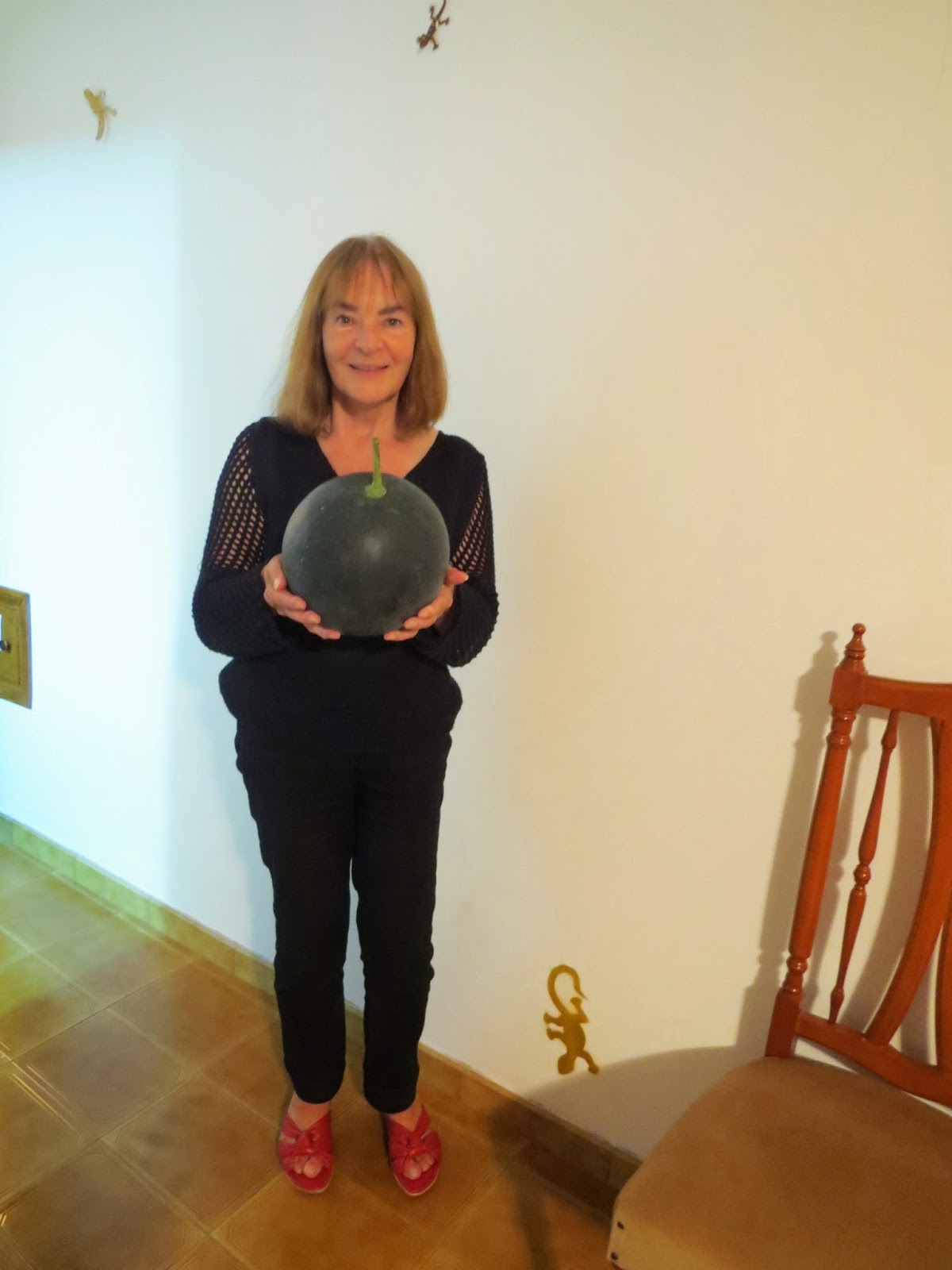 Now, settled in our village of La Fresneda at last, we are enjoying the sole produce of our huerto: one large watermelon. That’s above ground. We also have potatoes below if Adrian Mole hasn’t stolen them.
Posted by Rob Walters at 18:46