I have just reached Verona in Northern Italy, having travelled fairly rapidly from Poland via Slovakia and Austria. I liked the latter best. On our travels we have met a number of people of different nationality and almost every conversation  contained a discussion on the Scottish independence question (now mercifully answered, and for good I hope). The most common response was incredulity: incredulity that the Scots would consider independence at all and furthermore that the vote might be a ‘yes’. “That sort of nationalism is a thing of the past,” a man from Germany told me. 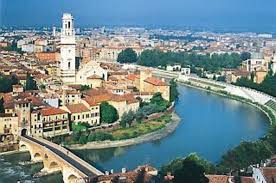 Leaving Slovakia, we circled Bratislava on our slow progress towards the south-west and got badly lost. This was not unexpected; the route was a difficult one to plot on our inadequate atlas of Europe and intersections, road numbers and terminal points were vague. Finally, we found ourselves on the road to Budapest in Hungary whereas we were supposed to be heading for Graz in Austria. We knew that we had lost it when we passed through an extensive set of dilapidated border control buildings. I left the main road and headed north in the hope of intersecting our original route. Soon we passed another border control complex and my these things were big: splitting the road into many lanes and dotted with ugly concrete constructions. The building were in an atrocious state: ceilings collapsing and the area dotted with the detritus of neglect and, of course, entirely deserted. The army of border guards had long dispersed and hopefully were now doing some more meaningful task.

Baratislava has nearby borders with Germany, Hungary, Slovakia and the Czech Republic, now completely unchecked and, as far as I can tell, creating no problems. Those crumbling frontier posts should be a monument to Europe united now by peace and beneficial commerce – and to the death of that evil force that has caused so much death, pain and suffering: nationalism.

Our passage through Slovakia was not the most memorable, though the Tatra mountains were impressive and a great contrast to the flatlands of Poland. The country seems poor and neglected and our first choice for an overnight stay, Zilina, was quickly rejected. We found a better, smaller place nearby called Bytca and had a meal in the Galleria restaurant, just me and Margaret in a vast and beautiful subterranean restaurant. I was awakened at 3 a.m. by a loud scream. Someone was trying to steal our bicycles from the rack at the back of the van. Fortunately Margaret’s scream was enough to scare them off, but further sleep was near impossible.

Why Slovakia separated from the Czech Republic, I do not know. I cannot even remember it happening. Comparing what I saw of country with previous visits to Prague (probably not a fair comparison), this nationalistic split has not benefited the country. However, they do have Tesco supermarkets and Margaret took some mysterious delight in visiting one: her attempt to use her club card was, however, rejected.

And so back to Scotland. We celebrated the confirmation of the union last night with a dram in a Veronese bar. The waiter found three whisky bottles from which we could choose; of course we chose the Scotch. We talked animatedly of what would follow the “no” vote and drank again to the welcome news of the First Minister’s resignation. I then asked for the bill: sixteen euros for two whiskies!!! It was enough to make a Scotsman - and an Englishman – blanche. Why you can by a bottle of the stuff for that and, worse still, - I do not even like it.

Anyway, roll on the union. Time for closer economic ties with Ireland and a united British Isles rather than United Kingdom.
Posted by Rob Walters at 11:34