I’ve published a new eBook! That makes eight that I’ve now got up in the Kindle store. They do sell, but not in great numbers – got a cheque from Amazon for just over $100 the other day though which is nice.

I blogged earlier this year about my ‘brilliant’ marketing ploy which consisted of giving one of my books away. I stopped that at 300 downloads and to my disappointment my generosity seemed to have little effect on follow up sales and did not result in a single review.

The new book is another ‘brilliant’ marketing ploy. It is about our two trips to China and should turn up if anyone searches the Kindle store for books on travel to that country and there are a few general keywords which should  also draw in a goodly number of potential readers. It stands alone as a book, but is also an advertising channel for my novel Shaken by China, which I would really like people to read. So it’s not a loss-leader, but should be a leader. 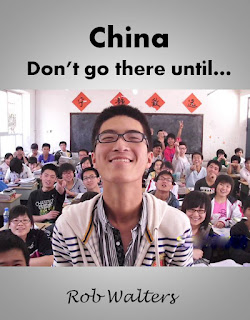 The new book is called China: Don’t go there until... Catchy eh? The ‘until’ is until you’ve read the book of course. Sort of Catch 22, sort of. You can see more details in my bookshop or in the Kindle bookstore. You don’t need a Kindle to read it. Just go to this link and download Kindle for PC (or Mac) and you can read it on your screen (but not in bed).  Here’s the blurb:

If you are thinking of going to China to teach or travel then don’t – not until you have read this book. The book may entice you to go or it may persuade you to stay. Either way if you are interested in China and wish to venture far beyond the tourist guide view then read this book.

The author lived in one of the most famous cities in China, yet few in the West have heard of it. He also lived near the epicentre of the most damaging earthquake in recorded history, yet it is long forgotten. China is so big that it hides behind itself so you need a book that takes you beyond the veil: this is that book. It is not a detailed study of the country, yet reveals the heart of the place through insightful revelations.

You will enjoy the accounts of teaching and travelling which are sometimes funny, sometimes sad. You will be surprised and shocked at the descriptions of school life and the life of the poor. You will begin to understand the very real cultural differences between the West and China and learn how to cope with them. You will also learn how to buy beer in Chinese restaurants.

Rob Walters’ book spotlights the fundamental problem facing the foreign teacher in China and provides a solution. It is entertaining and informative and, since it is based on two separate visits, gives a sense of China’s unending paradox: its stability and its ability to cope with rapid change.