In praise of arbitrariness

I’ve just returned from a walking trip. It was originally proposed by a friend who has long cherished the idea of walking from Yoxford, in Suffolk, to Oxford, our hometown. There was no particular reason for the venture: it was neither to raise money for charity nor to beat some previous record. We just did it because we wanted to and Yoxford  and Oxford have such similar yet dissimilar names.

Neither of us completed the walk, though we bottled out at different points along the way and for different reasons. There was little planning put into the trip; in fact right up until the very last moment we were discussing two very different possibilities: walking or cycling. I was for the former, Peter was for the latter. We finally decided this important matter at the spin of a coin – now that’s arbitrary. 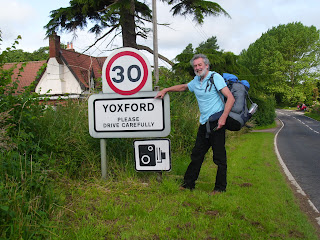 We had a beginning and end point, but no set route between them, just a pile of maps. Except for the first night when we spent an excellent evening with Mark and Yvonne in their home in Yoxford we had no accommodation planned and carried only back packs with sleeping bags: no tent. We thought we would find somewhere to sleep wherever we finished up for the night – that’s arbitrary, and frightening for some.

We planned our route day-by-day and sometimes hour-by-hour. Our only overriding plan was to reach Oxford within seven days. We wandered along footpaths through the county of Suffolk using roads only if we forced to do so, walking through storms under cloudy skies with just the occasional glimpses of the sun.
On the first day my companion suffered from blistered feet, and by the third he had to give up. Plainly in great pain, he bravely soldiered on for as long as he could, but finally admitted defeat in Haverhill and took the bus to Cambridge then home. So, arbitrarily, I found myself alone.

The Icknield Way (an ancient track originally used by ancient Britons) became my constant companion soon after Haverhill. I followed it as closely as I could for two days then finally linked up with the Ridgeway, another ancient path: this was the most beautiful part of the journey.

Finally, after eight days of walking, I ended up in a pub in Thame footsore and exhausted. The weather had changed. The sun had beaten down upon me so much that I had to use an umbrella for shade as I traipsed along an old railway track from Princes Risborough. Arbitrarily I decided that I had had enough. I had walked about one hundred and fifty miles and was already in Oxfordshire so I finished my second pint, said goodbye to my three recently made drinking friends and took the bus home. 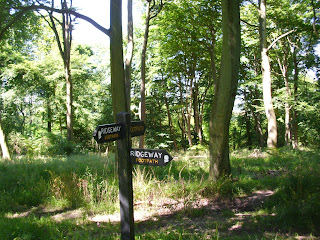 I enjoyed that walk from Yoxford to Oxford so much. Not the pain in my heels and my soles, nor the spasms in my legs as the days wore on, nor the constant ache in my shoulders as the backpack’s weight seem to increase day by day, nor the rain, nor the puddles of mud, nor the often wet feet – no, none of those. But the sudden appearance of a beautiful cottage or stately home, the surprising sight of a herd of deer, the metre high rabbit that turned out to be a wallaby, the tiger spotted from the corner of my eye in someone’s garden, a glimpse of Chequers – all of this and more made my walk a magical one. At the end of the day I often felt that I could not go on, did not even have the energy left to find somewhere to stay. But I always did find somewhere and I also found real ale which revived me and, more often, than not, company that regaled me.

And do you know? Along the way, somewhere between Royston and Baldock, I had an inspiration. I now know what my next writing project will be.

On the last night I struggled down from the Ridgeway to the town of Wendover. The first pub had no room at the inn and the second, the King and Queen, wouldn’t take me either. I had few options left: sleep on a park bench or somehow get back to Oxford and home. The latter was out – I still had a strong desire to reach Oxfordshire on my own two feet. Then a friendly voice next to me said, “You can stay at my house for the night if you wish.” So I did.

The voice belonged to a man called Peter. We drank together then walked to his home where he cooked a very welcome meal. He made me scrambled eggs on toast (with mushrooms) for breakfast and we engaged in a long and rewarding conversation over both meals. He turned out to be a really interesting man as well as a hospitable one. I am sure that we will meet again following our arbitrary crossing of paths at the end of my arbitrary trek.

Please note that any connection between the Yoxford to Oxford walk and the forthcoming Olympics is quite arbitrary and that this blog is an Olympic free zone.